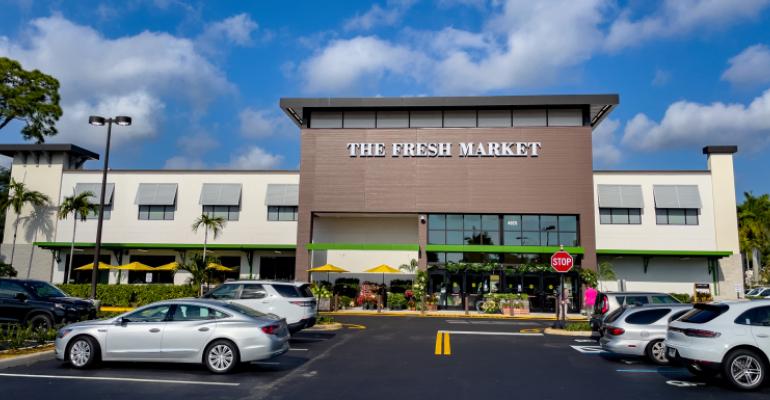 The Fresh Market
Cencosud said it had reached an agreement eventually to buy The Fresh Market, whose controlling fund is managed by affiliates of Apollo Global Management.
News>Retail & Financial

Cencosud, a leading retail group based in Chile, announced Tuesday that it had purchased 67% of The Fresh Market grocery chain in a deal valued at $676 million.

Greensboro, N.C.-based The Fresh Market operates 160 stores in 22 states, with the majority in Florida.

In a filing to the Chilean securities regulator, according to Reuters, Cencosud said it had reached an agreement to buy the specialty grocer, whose controlling fund is managed by affiliates of Apollo Global Management.

"The agreement also establishes the possibility that through legal mechanisms that are practiced in the United States, after a certain period of time, Cencosud Internacional can reach a 100% stake," the Chilean firm said in the filing.

Based in Las Condes, Chile, Cencosud operates over 900 stores through a variety of retail brands throughout South America, including Argentina, Brazil, Peru and Colombia. Last week, Cencosud announced it had acquired Brazilian supermarket chain GIGA for approximately $100 million.

“Cencosud has demonstrated that it is a world-class retailer with exceptional margins, and we look forward to sharing best practices across our businesses,” said Jason Potter, CEO of The Fresh Market, in a statement. “ The Fresh Market has experienced strong financial momentum over the last few years and this partnership with Cencosud will allow the company to further capture market share as we expand our footprint in our core Southeast market and beyond.”

According to a Cencosud press release, this transaction expands the company’s geographic diversification with approximately 12% of pro forma revenues coming from the United States, “a traditionally defensive market with a stable currency."

Cencosud further stated, "This partnership also provides Cencosud with access to the U.S. markets where there is a much greater depth of capital markets alternatives. In addition, Cencosud will be able to leverage best practices across its Latin American businesses to The Fresh Market, and accordingly incorporate best practices from The Fresh Market to its existing portfolio, helping to drive increased performance and efficiencies."

“The Fresh Market is one of the best supermarkets in the USA, widely recognized by market specialists and customers alike for its customer-centric culture, excellence in fresh produce and memorable shopping experience in its stores,” said Matias Videla, CEO of Cencosud, in a statement. “We are very pleased to make our first investment in the American market through a partnership of the prestige of Apollo Global Management with extensive experience in the retail market. Our team is very excited to start working together to accelerate the growth and value of the company.”