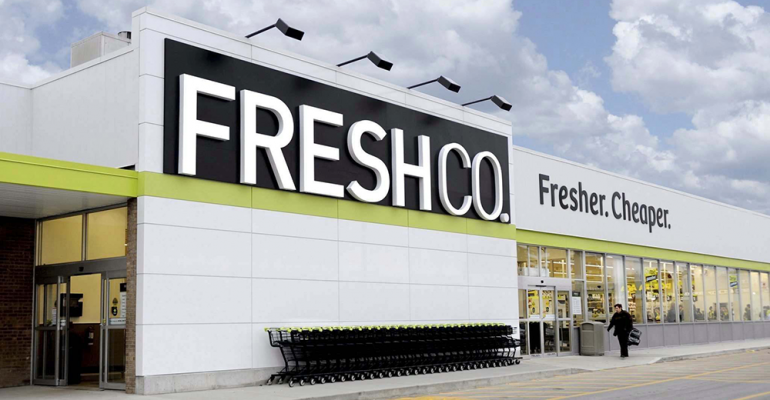 Conversion of Safeway, Sobeys stores to FreshCo on track

Empire Co. Ltd. is making strides in its plan to expand its FreshCo discount grocery banner in western Canada.

The Sobeys Inc. parent company expects to open 12 FreshCo locations during calendar 2019 in British Columbia and Manitoba. In December 2017, Sobeys had unveiled plans to convert up to 25% of its 255 Safeway and Sobeys full-service stores in the region — amounting to more than 60 locations — to the FreshCo banner over the next five years.

This week, Empire said 10 stores in British Columbia will be reopened as FreshCo locations, adding to two store conversions in Winnipeg, Manitoba, announced in July 2018.

The first five FreshCo stores are slated to open this spring, including the two Winnipeg-area stores and three stores in British Columbia. Another seven stores are to be reopened under the FreshCo banner in British Columbia during the first half of fiscal 2020 (ending in June 2019), depending on timing of construction schedules and permits, Empire said.

The new FreshCo locations confirmed to date are in the Kildonan and Jefferson sections of Winnipeg; Abbotsford, Aldergrove, Ladner, Maple Ridge and Mission, B.C.; and the downtown Chilliwack, Broadmoor and Blundell neighborhoods in Richmond, and Strawberry Hills and Newton sections of Surrey, B.C.

Stellarton, Nova Scotia-based Empire said a labor-related decision by the British Columbia government will help the company level the competitive playing field in the province. Announced Tuesday, the decision will enable Empire to offer voluntary buyouts to long-service Safeway employees in British Columbia, providing more flexibility and stability in managing labor and operational costs, according to the company.

"We are in the midst of turning around our western Canadian stores. We have improved our standards, execution and marketing," Empire President and CEO Michael Medline said in a statement. "We are extremely proud of the progress our teammates in the region are making. This decision in B.C. is a major building block in improving our customer service, employee relations, profitability and flexibility in the West."

In addition to expanding FreshCo, Empire aims to boost the presence of fresh grocery chain Farm Boy, acquired in an $800 million (Canadian) deal that closed in December. Plans call for Sobeys to ramp up the rollout of the Farm Boy concept in greater Toronto and southwestern Ontario through new construction and conversions of some current Sobeys stores.