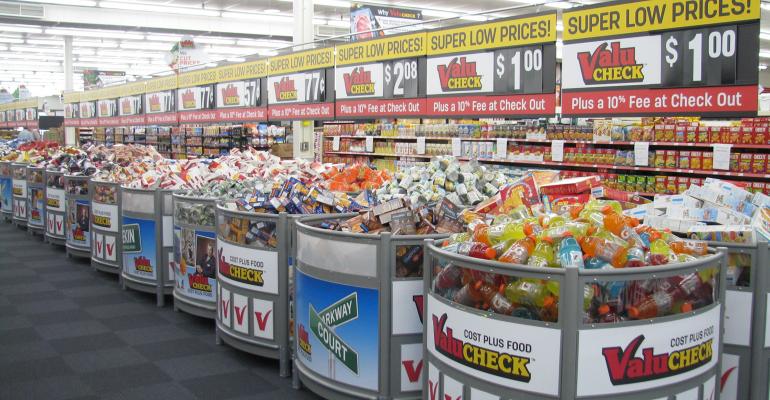 The cost-plus format is making a comeback

What started as a move to combat Walmart in the Deep South, cost plus is seeing growth in the independent market

Pushed to the brink of extinction by competitors with deep pockets — and consumers with thin wallets — some independent grocers are mounting a last-ditch counterattack behind a fresh take on an old format.

A new wave of “cost-plus” stores — typically, converted conventional stores that price all goods at cost and impose a 10% basket charge at the register — are helping many independents achieve pricing and volume parity with national and regional competitors without surrendering variety. It’s one avenue for survival when the alternatives are going discount or going dark.

Though the cost-plus format first gained traction in Texas and the Deep South nearly 20 years ago, increasingly price-competitive conditions in places like the Midwest and Mid-Atlantic states have sparked the new wave, which has been helped along by a new licensed cost-plus format program from wholesaler Supervalu known as Shoppers Value Foods.

Supervalu, as of late last year, said there were about 511 cost-plus stores total in the U.S. but expected more than 700 by the end of this year. That’s growth of about 37%. Supervalu supplied 83 of those 511 cost-plus locations, officials said last year, which generated sales of about $800 million.

Not every store is an ideal candidate to be changed to a cost-plus format, and not every conversion works, sources note. Most importantly, retailers say, successfully executing the concept means committing to it fully, even in those times when doing so seemingly interferes with retail muscle memory.

“I’m 29 years old. I’ve grown up in the grocery business and never had another job in my life. Everything I’ve ever done has revolved around either school or a grocery store,” explained Corey Facemire, a second-generation operator of six grocery stores based in Gassaway, W.Va., three of which have been flipped to the Shoppers Value Food cost-plus format since 2015. “This Shoppers Value program comes in and it’s like, ‘All right, everything you know about grocery stores, throw it out the window.’ It doesn’t work anymore.”

Suppressing the instinct to think about the store as a collection of varying margin percentages to blend has not been easy, Facemire admits. “You need to find one of those ‘Men in Black’ to erase your mind and start all over,” he said.

The need to have done so, he acknowledges, is not science fiction. The cost-plus movement is rooted in a few unpleasant realities for independent retailers. It acknowledges the transformative effect that Wal-Mart Stores has had on the grocery industry; the reaction to it by large chain grocers like Kroger, which have worked to narrow Walmart’s pricing leadership; and by the growing influence of hard discounters like Aldi and Save-A-Lot and dollar stores selling food.

When these forces are all at work in slow-growing markets, and where consumers themselves are struggling amid rising costs for housing and healthcare, the independent grocer is often the first to feel the pinch.

“What we were looking at is the same challenge that every independent grocer in the country is stared in the face with: West Virginia has been inundated with Walmart; Kroger has been here a long time; and those two have kind of gotten into a quarrel with each other over who’s the real big dog on the grocery block,” Facemire explained. “Those two getting into it wasn’t beneficial to anybody in the independent market.”

Facemire said he was at a loss as to how to address falling sales at his stores that competed with Walmart and Kroger when his Supervalu representative encouraged him to attend a seminar on the new Shoppers Value Food licensed format in 2014. “I didn’t think this was something I wanted to do,” he said, “but before long the wheels were turning.”

Facemire converted his first store, a Foodland location in Huntington, W.Va., to Shoppers Value in the spring of 2015. Pleased with the results of the first change, Facemire flipped two additional stores to the Shoppers Value format last summer.

Niemann Foods introduced cost plus under the Valu Check banner at two struggling conventional supermarket sites last year. Owen Miller, Niemann’s senior director of perishable buying, who is also heading up the Valu Check expansion, said the company had previously tried to remake one of the units into a discount store only to encounter customer satisfaction issues due to reduced selection.

Neimann patterned its cost-plus model on that of Lowe’s Markets in Texas, which has a mature fleet of cost-plus stores and whose officials participate in a share group with Niemann executives, Miller said.

“The stores we had to convert at one time were shining stars but due to changes in the marketplace and additional competitors, that may have changed some,” Miller said. “We knew we had to do something to get some life back in them, and bring something totally different to the game than what we were doing, and from what competitors around us [Kroger, Schnucks, Meijer and Walmart] offered up as well.” Cost plus is about as simple as it sounds. Retailers set shelf pricing for every item in the store at their cost — the item, transportation and warehousing costs and labor to get it on the shelf — and simply charge consumers 10% of their total basket at checkout. The approach requires extreme cost discipline — most cost-plus stores do not have service delis, limit operating hours and don’t do overnight stocking. Stores aim to limit labor costs to no more than 8% of sales, sources said.

For Facemire, sacrificing deli was a painful decision. Under the Foodland banner, he took pride in store-made doughnuts and a successful birthday cake program that each had to be scrapped under the new format, while sliced sandwich meats were transferred to the meat department. In their place at one of his stores is what he calls a dollar section — in the cost-plus world, it’s actually an 88 cents department — that has done extremely well.

Typically, cost-plus stores aim to do higher than average meat sales — around 28.5% of total store sales, or nearly twice conventional stores, according to David J. Livingston, a consultant with Pewaukee, Wis.-based DJL Research. Overall gross profit percentages are down vs. typical stores — about 20%, where a conventional model could show around 27% profit, Livingston added.

When prices are costs, they are what they turn out to be — and one of the hurdles for cost-plus operators and their shoppers is getting used to looking at prices that don’t necessarily end in a “9.” But the vital struggle is communicating that value to shoppers, because without heavy increases in sales volume, the concept simply doesn’t work.

“It has to be done on volume,” Miller insisted. “We can’t do the same volume we’d done before. We have to put more items through the registers, and more customers in our house.”

Operators point to the importance of having employees who can explain the concept to shoppers, and signage making the offer clear. The Avanza chain in Denver after switching to a cost-plus model in 2008 was sued by a group of consumers who said its pricing practices were deceptive. (The chain, then a division of Nash Finch, eventually settled the case by paying six plaintiffs $700 each).

“Transparency is key,” said Brian Numainville, principal of the Retail Feedback Group, who suggests that retailers attempting such a program should “over-communicate” the message. “If a retailer isn’t clear about how cost is calculated, customers might not buy into the concept.”

If executed properly, cost plus can deliver powerful price perception. Facemire said his Shoppers Value stores today are priced below Kroger and about equal with Walmart on the very same items. “After their second or third trip through the store [customers] didn’t care what cost plus was,” he said. “What they knew was, here was what my receipt used to look like, and I’m buying the same amount of items today, apples to apples, and now here’s what my receipt is today.”

According to Miller, sales at Valu Check since the conversion of its Pekin, Ill., store last May have increased: Meat item sales are up by as much as 100% on some weeks; produce item sales up by 50% to 75%; and grocery volume up by 35% to 45%.

Operators believe meat sales in cost-plus stores outperform other categories in part because offering them at cost allows for pack sizes that under a conventional pricing scheme would be out of reach for many shoppers. Fresh meat is also a means of differentiating offerings from retailers like Walmart that don’t cut in store.

“Our biggest niche is meat,” said Bill Davis, VP of A&R Supermarkets, a Calera, Ala.-based independent grocer with five supermarkets — four under a cost-plus format. “We’re thankful Walmart doesn’t have fresh-cut meat in their stores and none of the dollar stores want to try fresh meat in their stores. That’s still our niche, and we try to complement that with everything else in the store.”

Davis was among the early practitioners of the cost-plus format, which swept the South in the wake of Walmart’s Supercenter tsunami of the 1990s.

“The reason cost-plus came about was when Walmart started getting into the grocery business and building all these Supercenters, it put the independent grocer at a disadvantage because we just don’t have the buying power that the bigger chains have. And so for lack of a better phrase, it was Plan B,” he said.

“We purchase our groceries from Associated Grocers of the South and they had come up with a cost-plus format to combat that, and that’s what we did,” Davis added. “Because when Walmart started opening up, they took 50% of our sales overnight.”

Today, Davis said, competition in the area has stiffened as more formats have gotten into food.

“Down here everybody and their brother is in the EBT/SNAP game, even the Mom and Pops. People go now to Dollar General, Dollar Tree, Family Dollar, etc., and where there used to be enough margin for the independent grocer to make money in a conventional store, it’s not there anymore.”