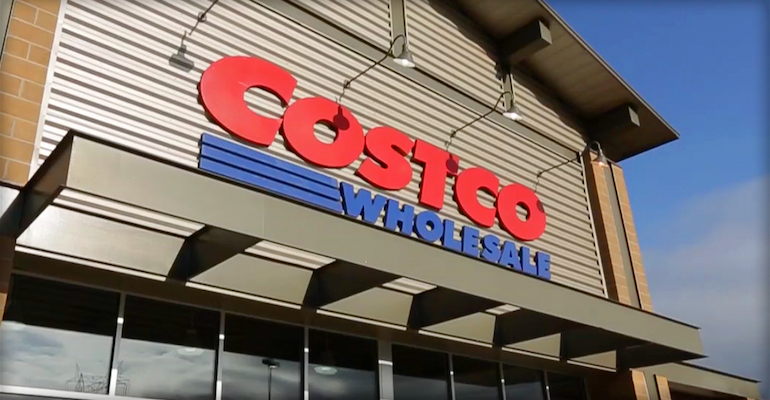 Food and e-commerce were among the bright spots as Costco Wholesale Corp. posted double-digit sales gains for February and its fiscal 2021 second quarter.

For the four weeks ended Feb. 28, net sales rose 15.2% to $14.05 billion from $12.20 billion a year earlier, Costco reported after yesterday’s market close. Comparable sales for the month climbed 13.8% year over year and were up 12.3% excluding fuel and the impact of foreign exchange rates.

Traffic for February was flat worldwide but edged up 0.7% in the U.S., according to Costco Chief Financial Officer Richard Galanti. Worldwide, the average transaction size grew 13.8%.

Fresh foods and grocery were among the merchandise categories turning in a strong monthly performance, Galanti told analysts in a conference call late Thursday.

“In terms of the second-quarter comp-sales metrics, our traffic or shopping frequency increased 1% worldwide and was up 2.7% in the U.S. on a year-over-year basis,” Galanti said. “Our average transaction or ticket was up 11.9% total company and 8.5% in the U.S.”

“Similar to the last several fiscal quarters, sales penetration has shifted to the core business, resulting in higher contribution to our total gross-margin dollars coming from the core operations versus a year earlier. Looking at the core merchandise categories in relation only to their own sales, margins year over year were higher by 71 basis points,” Galanti explained. “Fresh foods was again the biggest driver here. With strong sales in fresh, we benefited from the efficiency gains in labor productivity and significantly lower spoilage. The other three major merchandise categories — food and sundries, softlines and hardlines — all had higher margin percentages year over year in the quarter as well.”

“Total online grocery grew at a very strong rate in the second quarter,” Galanti said. “The comp numbers just mentioned follow our usual convention, which excludes our third-party same-day grocery program [Instacart], which was up 450% year over year in the quarter. If we include the third-party same-day in our e-commerce comps, the 76% reported comp number would have been 96%.”

“Costco Logistics, formerly known as Innovel, continues to fulfill a greater percentage of our delivery items and has steadily increased since its acquisition a year ago in March,” he added. 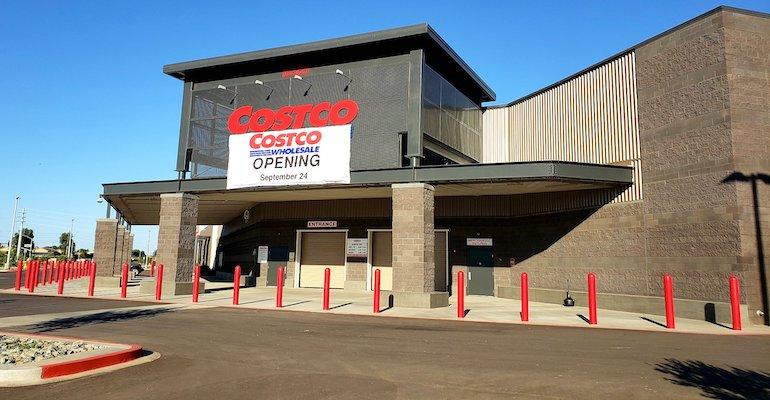 Costco plans to add 13 net new clubs in the fiscal 2021 second half.

A test of Instacart-powered curbside pickup at three clubs in Albuquerque, N.M., also is progressing, according to Galanti. Dubbed Costco Curbside Pickup, the service offers a selection of about 2,000 grocery items, including fresh food and some nonfood products.

“Our three-warehouse curbside pickup test in Albuquerque is ongoing. We don’t really have a lot to add at this time, as the test is recent and continuing,” he said. “The pilot is going well. Our members have responded to it, and basket size has actually surpassed our expectations. Our focus, of course, is how can we be more efficient at doing it to determine if this offering can become scalable and make economic sense for us.”

Analysts, on average, had forecast adjusted earnings per share of $2.45, with estimates ranging from $2.18 to $2.85, according to Refinitiv.

From March 2020 to February 2021, Costco tallied about $1.06 billion pretax on COVID-related expenses, of which $825 million stemmed from a $2-per-hour wage bonus, Galanti said.

“With the $2 an hour extra pay having been paid in for full year, that extra amount has been discontinued as of this past Sunday, Feb. 28. And effective March 1, a few days ago, we have implemented a permanent wage increase for hourly employees as well as most salaried warehouse employees,” he explained. “In the U.S. and Canada, we are permanently increasing our starting wage and most wage steps above that by $1 an hour and increasing our top-of-scale hourly wage by 45 cents an hour on top of the previously planned 55 cents-an-hour increase for top-of-scale. With these changes, our entry-level hourly wages will increase from $15 and $15.50 an hour to $16 and $16.50 an hour. Similar-type increases are occurring in other countries where we operate.”

Costco didn’t open any new clubs in the second quarter but has eight net new locations for the year to date.

“In the second half of the fiscal year, both this quarter and the fourth fiscal quarter, we plan to open 13 more net new units,” Galanti said. “Five of those will be in the U.S., three will be in Canada and five will be in overseas.”

Issaquah, Wash.-based Costco now operates 804 warehouses overall, including 558 in the United States and Puerto Rico, compared with 785 total and 546 in the U.S. and Puerto Rico a year ago. Its international locations include 103 clubs in Canada, 39 in Mexico, 29 in the United Kingdom, 27 in Japan, 16 in Korea, 14 in Taiwan, 12 in Australia, three in Spain, and one apiece in Iceland, France and China. The club chain also operates e-commerce sites in the U.S., Canada, the U.K., Mexico, Korea, Taiwan, Japan and Australia.

"Regarding the curbside trial under way in New Mexico, Costco echoed commentary from peers that curbside baskets are bigger than expected and many customers come into the club to buy additional goods," Wissink wrote in a research note late Thursday. "Costco reiterated its focus on efficiency and gross margin, ensuring a curbside program is scalable before rolling out. KPIs [key performance indicators] so far include bigger baskets and favorable mix composition, which bodes well for potential."