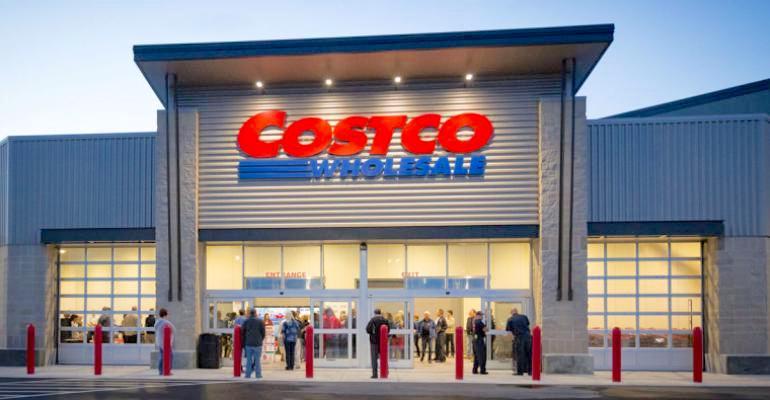 Costco
As in April, Costco's sales results for May marked a big rebound from a year ago, when the warehouse club chain was impacted by COVID-related restrictions.
News>Retail & Financial

Costco rings up 23% comp-sales gain for May

Strong food sales, led by fresh, helped fuel net and comparable sales growth of well over 20% at Costco Wholesale Corp. in May.

E-commerce sales in May rose 12.1% on a comparable basis and were up 8.7% excluding FX, Issaquah, Wash.-based Costco said.

As in April, sales results for May represented a sizable resurgence from May 2020, when Costco saw increases of 7.5% in net sales and 5.4% in comp-store sales, including a comp-sales gain of 5.5% in the U.S. (9.2% excluding fuel and FX) and a 106.2% jump (108.1% excluding FX) in e-commerce sales. At the time, COVID-19 pandemic-related restrictions reduced traffic and sales at clubs. Costco also had limited service in its travel and food court areas, and most optical, hearing aid and photo departments were closed. The company, too, saw lower volume and price deflation in fuel sales, compared with inflation and increased gasoline volume in May 2021.

David Sherwood, assistant vice president of finance and investor relations at Costco, reported continued strong club traffic for May, building on gains of more than 30% in April.

“Our comp traffic, or frequency, for May was up 18.8% worldwide and 18.3% in the U.S. this year. This year’s four-week May retail month had one additional shopping day versus last year due to the calendar shift of Memorial Day. This positively impacted total and comparable sales, as well as traffic, by approximately 2% to 2.5%,” Sherwood said in a conference call late Thursday. “Worldwide, the average transaction for May was up 3.4%, which included the positive impacts from gasoline inflation and FX,” he added.

Fuel price inflation boosted overall comp sales by about 4.4% for the month, according to Sherwood. “The average selling price was 53% higher year over year, at $3.13 per gallon this year compared to $2.05 cents last year. Comp gasoline volume was also up significantly relative to last year.”

U.S. regions and markets posting the strongest sales results for Costco in May were the Southeast, Midwest and Texas, Sherwood said. Internationally, Spain, Mexico and Korea turned in the strongest performances.

“Moving to the merchandise highlights, food and sundries were positive mid- to high single digits. Candy, sundries and liquor were the strongest departments,” he said, noting that the category comp-sales results exclude the positive impact of FX. “Fresh foods were up low double digits. Better-performing departments included service deli and bakery. Nonfoods were positive in the mid- to high teens, and better-performing departments included home furnishings, jewelry and apparel. Ancillary business sales were up more than 80%. Gas, hearing aids, optical and food court were all significant drivers.”

“May results are ahead of expectations and point to upside to the Q4 consensus core comp [sales] estimate of +3.8%,” Wissink wrote in a research note late Thursday. “We raise our Q4 core comp estimate to +6% on May strength and assuming a more modest tapering through the rest of the quarter based on continued momentum, especially in food, which has us rethinking food-at-home durability.”

Costco finished the May retail period with 809 warehouse clubs overall, compared with 787 a year earlier. By market, the retailer operates 559 clubs in the U.S. and Puerto Rico, 105 in Canada, 39 in Mexico, 29 in the United Kingdom, 29 in Japan, 16 in Korea, 14 in Taiwan, 12 in Australia, three in Spain and one each in Iceland, France and China. Costco runs e-commerce sites in the U.S., Canada, the U.K., Mexico, Korea, Taiwan, Japan and Australia.