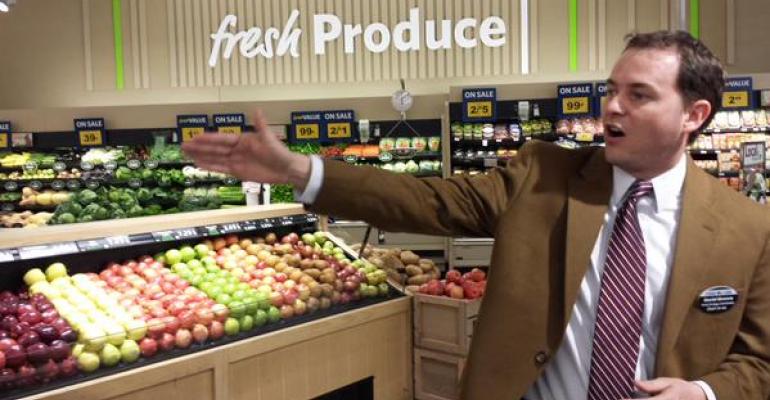 Delhaize officials including CEO Frans Muller and U.S. CEO Kevin Holt this week showed off a comprehensive rebranding underway at its Food Lion chain, affecting everything from how cakes are decorated to the uniforms its cashiers wear, underpinned by an effort to expand longstanding equity in convenience and price.

In events for financial analysts and journalists in Wilmington, N.C., where the retailer pioneered its “Easy Fresh and Affordable” strategy at 29 area stores last year, officials said the effort was already helping the chain to capture more market share and a greater percentage of its shoppers’ weekly food spend, but noted more work — on the store base and the strategy behind it — was still ahead.

Holt, who joined Delhaize America nine months ago after stints with Supervalu and Meijer, described Food Lion as a “tenacious” brand built around price and convenience, “and when we walked away from either of those attributes the business has suffered. We’ve gone back and reinvested in those assets and the business is again thriving.”

Meg Ham, president of Food Lion, said the brand strategy was the next step following a round of price investments and low-cost store cleanups between 2011 and 2013 that helped to stem sales and share losses throughout the chain. Combined with marketwide store renovations, the new branding expanded varieties in areas like gluten free, functional beverages and seasonal produce, included installation of new point of sale and checkstands to aid faster service, and invested in staffing and training with an eye toward presenting a more engaging shopping experience and a "selling" culture that is new for a chain traditionally focused on efficiency and routine.

“To come to a store today you can feel the temperature; you can smell and feel and sense the energy in a store that is well organized which is well-lit and is looking forward to serving customers,” Muller told SN. “I feel like we have a great momentum now at Food Lion. People are very excited about what they are doing. They see that they can win market share, and that they can get investment from the company to improve stores and assortments.”