In 2018, Amazon extended its challenge to brick-and-mortar grocery retailers beyond online delivery to format.

The launch of the cashierless Amazon Go stores takes shopper convenience to a new level and could reshape the in-store experience, industry analysts say. Though Amazon Go isn’t deemed a direct competitor to supermarkets, reports that Amazon plans up to 3,000 of the stores by 2021 have mass retailers worried they could see a siphoning of their food and beverage dollars, as consumers opt for no-waiting-in-line transactions for snacks, meals or grocery purchases. 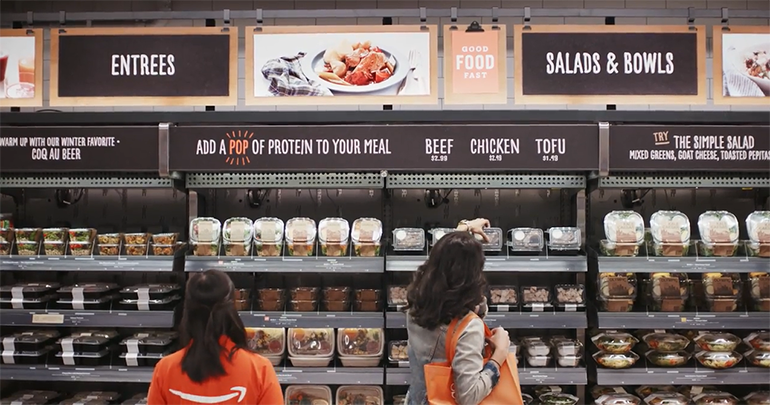 “Amazon Go’s combination of ready-to-eat and ready-to-cook food choices challenges both grocers and restaurants,” Steve Bishop, co-founder and managing partner at Brick Meets Click, commented following a visit to an Amazon Go store in Chicago. “With no lines or waiting, it’s easy to see why people would stop by twice a day — first to grab lunch and later to pick up a dinner option on their way home.”

Amazon Go stores use overhead cameras, weight sensors and deep learning technology to detect merchandise that shoppers take from or return to shelves and to keep track of the items selected in a virtual cart. Shoppers use the Amazon Go mobile app to gain entry to the store through a turnstile. When customers leave the store, the “Just Walk Out” technology automatically debits their Amazon account for the items they take and sends a receipt to the app.

“Amazon has designed a store that maximizes customer throughput and sales to produce exceptional results. In fact, Amazon Go stores produce more sales per square foot than virtually any other retailer except Apple and a few other specialty stores,” Brick Meets Click observed after studying sales volume and inventory turns at the first Amazon Go in Seattle, which opened to the public in January.

“The exceptionally high performance of both of these retail productivity metrics makes it clear that Amazon has succeeded in disrupting the established self-service model by developing a model that makes much more efficient use of inventory and the retail footprint,” the strategic advisory firm noted.

Other retailers are watch closing and testing similar concepts. “We’re experimenting with Amazon Go-like technology where, for example, somebody could come in and pick up a Plated [meal kit] order, it would know that you’re in the store, it would tender an order and you can leave outside of the checkstands,” Albertsons Cos. executive Shane Sampson told analysts this past spring.

Currently, there are seven Amazon Go locations: three in Seattle, three in Chicago and one in San Francisco. At press time, three others were planned for San Francisco, Chicago and New York City. The stores range from 1,200 to 2,300 square feet. Bloomberg reported in September that Amazon Go may grow to as many as 50 locations in key metro markets during 2019. And in December, a Wall Street Journal report said Amazon is testing cashierless checkout in larger store spaces.

“I think it’s ready to go,” Loop Capital’s Andrew Wolf said at the 2018 SN Financial Analysts Roundtable, before reports about a large-scale expansion of Amazon Go. “I have a sense this could be a real big change in retail.”