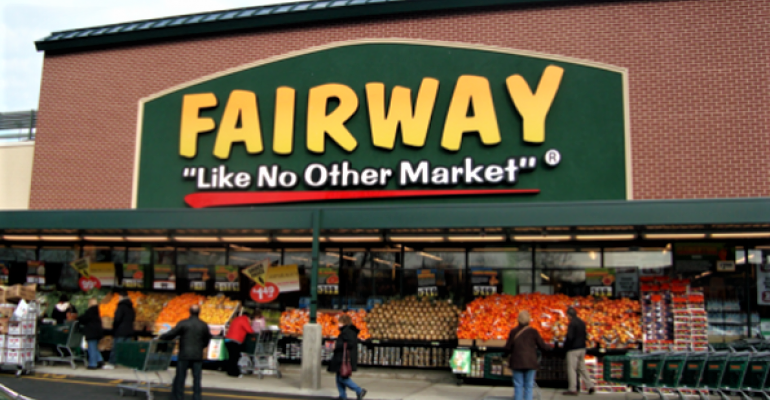 Fairway Market
When announcing its Chapter 11 bankruptcy filing in January, Fairway said it had a stalking-horse bid for its Manhattan stores and DC from ShopRite owner-operator Village Super Market.
News>Retail & Financial

Another suitor has emerged for the Manhattan stores and distribution center of upscale grocer Fairway Markets, which has been in Chapter 11 bankruptcy protection since late January.

Fairway reported Wednesday that it’s evaluating competitive offers for various other stores. Plans call for an auction to be held on March 16 under the Chapter 11 court-supervised sale process.

“We would like to extend gratitude to our employees, vendors, distributors and customers for their continued support, dedication and loyalty during this process,” Fairway Market CEO Abel Porter said in a statement. “Fairway’s store performance has generated significant interest in our stores. We look forward to a robust auction.”

Fairway now has eight stores in New York City, including five in Manhattan (Chelsea, Harlem, Kips Bay, Upper East Side and Upper West Side), two in Brooklyn (Georgetown and Red Hook) and one in Queens (Douglaston). The retailer also operates two stores in Long Island (Westbury and Plainview); one in Westchester County (Pelham Manor); two in New Jersey (Paramus and Woodland Park); and one in Connecticut (Stamford).

In addition, Fairway’s website lists four Wine & Spirits stores among its locations, including two outlets in New Jersey and one each in New York and Connecticut.

Bogopa has 17 Food Bazaar stores in New York City, including six in Brooklyn, five in the Bronx and six in Queens. The other New York stores are in Mount Vernon (Westchester County) and Brentwood (Long Island). Bogopa’s store network also includes five Food Bazaars in New Jersey and two in Connecticut, one of which is a Farmers Market by Food Bazaar location.

“The pivotal role our sector is playing during this extraordinary time further demonstrates the critical importance of supermarkets to our communities all around the country,” Scott Moses, managing director and head of food retail and restaurants investment banking at New York-based PJ Solomon, said in an email on Thursday. “While all of our clients’ projects are personal, the role Fairway is playing in our community these past few weeks emphasizes the importance of this project in a new way. These Fairway stores and DC employ over 1,500 people, preserving grocery jobs remains a core focus of our work.”