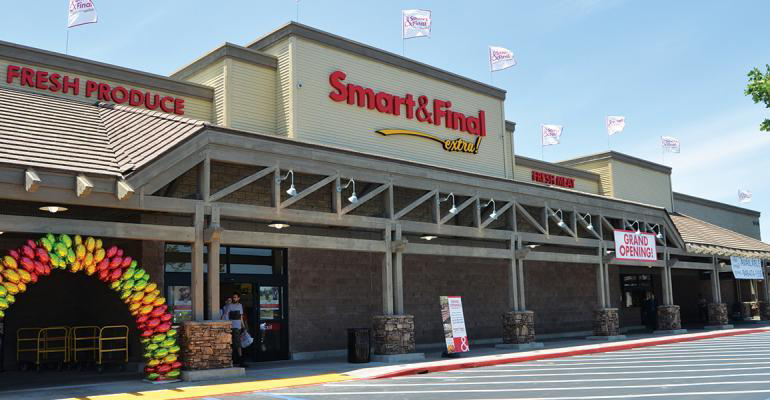 For the quarter ended March 24, net sales totaled just over $1.04 billion, up 2.8% from nearly $1.02 billion a year earlier, Smart & Final said Wednesday. The warehouse-style grocery retailer attributed the gain to a 2.2% rise in same-store sales and the net sales contribution of new stores.

The quarterly report will be one of the last for Commerce, Calif.-based Smart & Final. In mid-April, the publicly held retailer unveiled a $1.12 billion buyout deal with former owner Apollo Global Management LLC. Currently, Smart & Final is majority-owned by Ares Management, which holds a roughly 58% stake in the company. The parties expect to close the transaction by the end of the third quarter, at which time Smart & Final’s common stock will no longer be traded on the New York Stock Exchange.

“We had a strong start to the year,” President and CEO David Hirz told analysts in a conference call on Wednesday. “Comparable-store sales exceeded our first-quarter guidance range of 1.75% to 2% and represents our highest comp-store sales rate since the fourth quarter of fiscal 2017. Adjusted EBITDA [earnings before interest, taxes, depreciation and amortization] of $29.6 million was also higher than our Q1 guidance range of $25 million to $28 million and grew by approximately 4% year over year. We achieved these results despite ongoing challenges from a low inflation rate environment and one of the coldest and wettest winters in many of our markets in decades. In both store banners, we continued to emphasize our strong value proposition and unique product assortment that appeals to business and household customers alike.”

“In April, we expanded our Smart & Final banner e-commerce presence with online ordering and delivery through Shipt, providing yet another option for convenience. Our customers can now order product through shop.smartandfinal.com, as well as on the Shipt and Instacart marketplaces,” Hirz said. “Later this year, we'll further expand our customer-facing profile to include our own in-house e-commerce ordering site for both banners, providing us direct customer interaction, enhanced cost controls and the opportunity to work more directly with key vendors to improve economics for both our customers and the company.”

Smart & Final said it won’t be issuing fiscal 2019 guidance going forward because of the transaction with Apollo. The cash tender offer and shareholder and regulatory approval are pending.

Before Smart & Final’s quarterly report, Wall Street’s consensus estimate was for fiscal 2019 adjusted EPS of 44 cents, with projections running from a low of 42 cents to a high of 45 cents, according to Refinitiv/Thomson Reuters.

"The proposed transaction, which is supported by our majority shareholder, is a testament to the strength of our franchise and the talent and expertise of our associates,” Hirz said in a statement on Wednesday. “We look forward to closing the transaction and benefitting from Apollo's strategic guidance to help accelerate our business strategy and the growth of our two distinct banners as we begin a new chapter in our almost 150-year-long history."