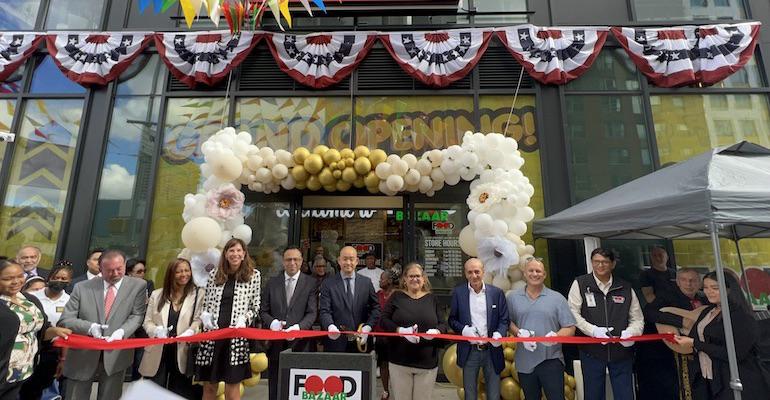 While the privately owned grocer welcomes one and all — after all, the name of its parent company, Bogopa, is Korean for “Yearning for You” — it also takes pride in its “vast international offerings,” not to mention its robust charitable activities, both demonstrated effectively by its recent entry into the uber-diverse neighborhood of East Harlem in Manhattan.

“We have had our eye on East Harlem for many years, and with this being our very first entry into the busy Manhattan market we are extremely excited to introduce our brand to the community,” said Edward Suh, executive vice president of Food Bazaar, which already operates several New York City locations in Queens, Brooklyn and the Bronx.

The new location at 201 East 125h Street, One East Harlem brings the company total to 30 locations across a tristate area encompassing New York, New Jersey and Connecticut. The store location is in a neighborhood dominated by various Hispanic groups, but also home to a burgeoning Chinese presence alongside Black, Italian and other ethnic communities.

There’s good reason why Bogopa is the company’s Korean name and that its offerings reflect cuisine from around the world. Founder Francis An was born in Korea, lived and learned in Argentina as a young man, and then moved to New York, where he found that the needs — i.e. foodstuffs — of minorities and immigrants could be better served.

He opened his first supermarket in Queens in 1988 and hasn’t looked back.

“We are able to provide the Peruvian family with papa seca (dried potato) in order to make a comforting dish of carapulca (Peruvian pork stew) and the Guatemalan family with plantains in order to create rellenitos de platano (mashed plantains stuffed with a mixture of refried beans, chocolate, and cinnamon),” Food Bazaar said in a statement.

“If a family from Mexico requires huitlacoche to make tamales the way they did back home, we actively seek it out and provide it.”

Here’s a look at some of the ways that retailer serves this part of Manhattan — once more commonly called Spanish Harlem:

There’s also Manhattan delivery service. The new store’s food and flavors can easily travel far beyond walking distance from East 125th Street. Food Bazaar’s online customers can click on the company’s website or mobile app to have their orders delivered to most of the NYC borough.

As a grand-opening celebration perk, the first 400 customers who displayed the Food Bazaar app on their phone received a voucher code for a free pair of New York Yankee tickets to select 2022 regular season games. That same day, free tote bags filled with goodies went to the first 1,000 customers and free food samples were offered throughout the store.