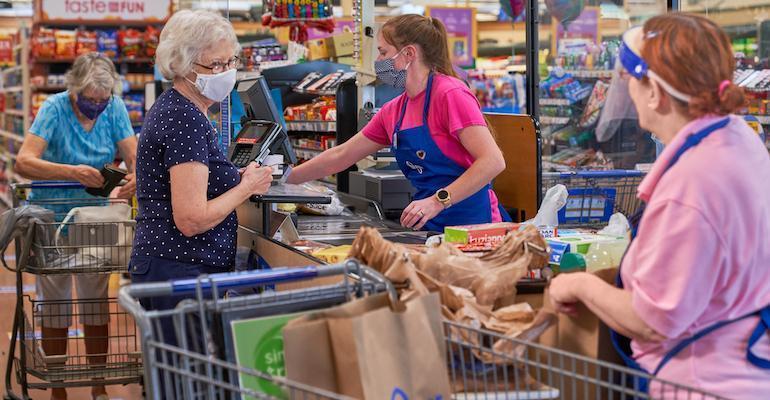 Kroger
The Consumer Price Index rose 6.2% year over year in October, with food pricing up 5.3% and driven in part by a 1% month-to-month uptick in food-at-home prices.
News>Retail & Financial

Much to the dismay of U.S. shoppers, consumer prices jumped more than 6% in October, boosted mainly by surging gasoline prices but also continued high inflation for food.

Food pricing was up 5.3% year over year in October, with the monthly gain of 0.9% the same as in September. Food-at-home prices climbed 5.3% during October versus a year earlier, but the month saw the second straight sequential increase of 1% or more. Month-to-month food-at-home pricing escalated 1% for October and 1.2% for September, the highest for the year to date.

In comparison, food-away-from-home index in October advanced 5.3% from a year ago, with a monthly increase of 0.8%, up from 0.5% for September.

Excluding food and energy, October’s CPI rose 4.6% from a year ago and 0.6% from a month ago, according to BLS.

In the food-at-home segment, all of the six major grocery-store food group indexes were up for October versus a year earlier. The index for meat, poultry, fish and eggs climbed 11.9%, including increases of 20.1% for beef and 14.1% for pork, its largest 12-month uptick since December 1990, BLS noted. Over the last 12 months, increases in the other major grocery food indices ranged from 1.8% in dairy and related products to 4.5% in non-alcoholic beverages.

Month-to-month gains in grocery food indices for October included 1.7% for meat, poultry, fish and eggs (following a 2.2% uptick in September); 3.1% for beef; 1.1% for cereal and bakery products (following a 1.1% increase in September); 0.8% for non-alcoholic beverages; 0.2% for dairy and related products; and 0.1% for fruit and vegetables. BLS said the index for “other food at home” rose 1.2% from the previous month, the segment’s largest monthly increase since April 2020, just after the onset of the COVID-19 pandemic. 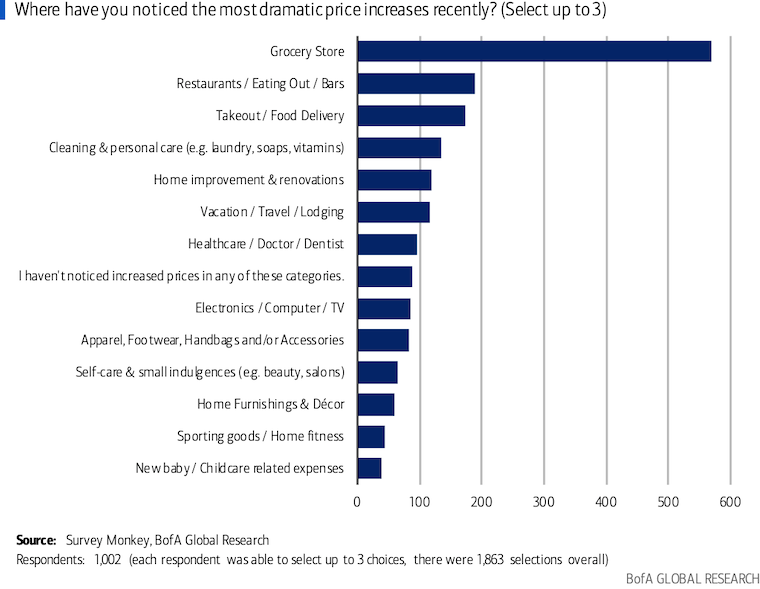 The ongoing price hikes aren’t being overlooked by food shoppers.

When respondents in BofA Global Research’s October Consumer Spending Survey, released this week, were asked where they’ve seen the most dramatic price increases recently, nearly 60% of the 1,000 shoppers polled cited the grocery store. Over the next three months, 30% of consumers said they expect to spend more in grocery, a higher percentage than in any other product/service category.

Nearly 30% of consumers in the BofA poll named the grocery store as the category/venue where they expect the most dramatic increase in their spending over the next 12 months. On the flip side, approximately 15% also cited grocery stores as the place where they’ve recently seen the most dramatic uptick in discounts, promotions and price reductions. Also, 20% of respondents reported that, over the past few months, they chose not to buy a grocery item (food and/or beverages) because they couldn’t find a good price or the selection was poor.

“Ahead of two of the most food-centric U.S. holidays, supply chain disruptions are raising grocery bills — and consumers are noticing. Amid media reports about surging grocery costs, nearly seven in 10 U.S. consumers expect prices for food and non-alcoholic beverages to increase this holiday season compared with previous years,” according to Emily Moquin, food and beverage analyst at data intelligence firm Morning Consult.

“Increased awareness of supply chain issues is driving consumers’ expectations of higher grocery prices,” she noted in a report this week on holiday food spending. “Among those who say they’ve heard ‘a lot’ about the supply chain crisis, the proportion who expect grocery prices to increase this year climbs 16 percentage points to 85%.” 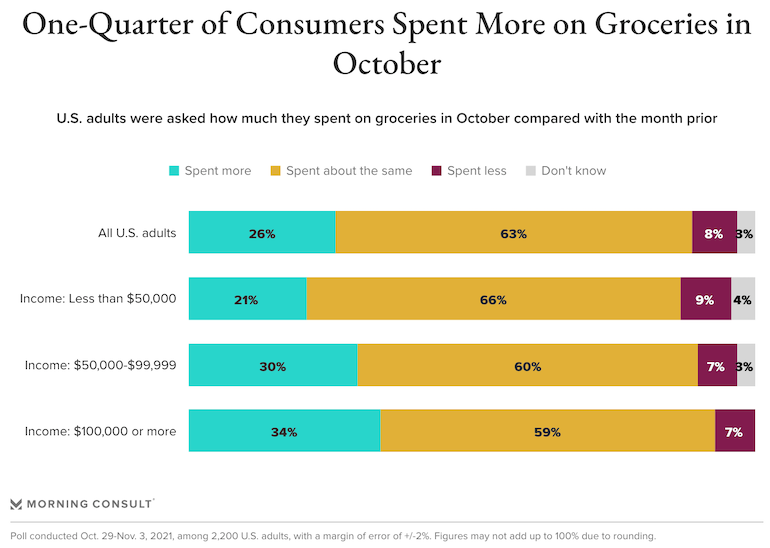 Of 2,200 U.S. adults polled Oct. 29 to Nov. 3 by Morning Consult, 26% said they spent more on groceries in October versus the previous month, while 63% reported they spend about the same. More than half of respondents were “very or somewhat concerned” about the cost of meat (80%), produce (76%), dairy (70%), pantry items (68%), beverages (62%) and ingredients like oils and spices (60%). Forty-nine percent were “very or somewhat concerned” about alcoholic beverage pricing.

“To save money on grocery bills, many shoppers engage in a range of cost-cutting habits. Comparing prices and switching from name brands to generic or store brands top the list, and at least one-third of shoppers say they “often” take such measures to save money,” Moquin explained. “One cost-saving habit is of particular concern for food and beverage brands: switching to generic or store-brand products. This trend is relatively consistent across all age groups and dips only slightly among higher-income consumers (those in households earning more than $100,000 annually).” 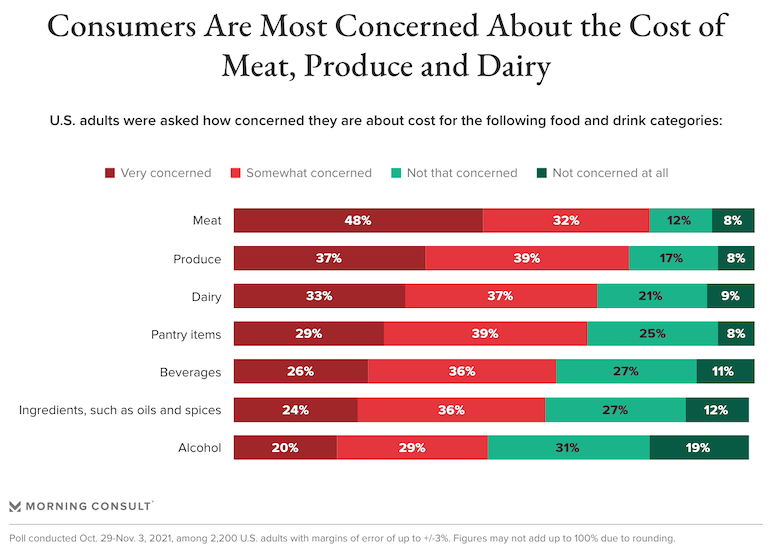 Comparing prices topped the list of ways for cutting grocery bills, with 46% of consumers in the Morning Consult survey saying they often use that strategy, followed by 36% who report often buying private-label items instead of national brands. Other grocery cost-saving methods often used by respondents included coupons (cited by 25%), shopping at multiple stores (24%), buying in bulk (18%), purchasing less meat (18%), buying in smaller quantities (16%) and purchasing fewer items overall (16%).