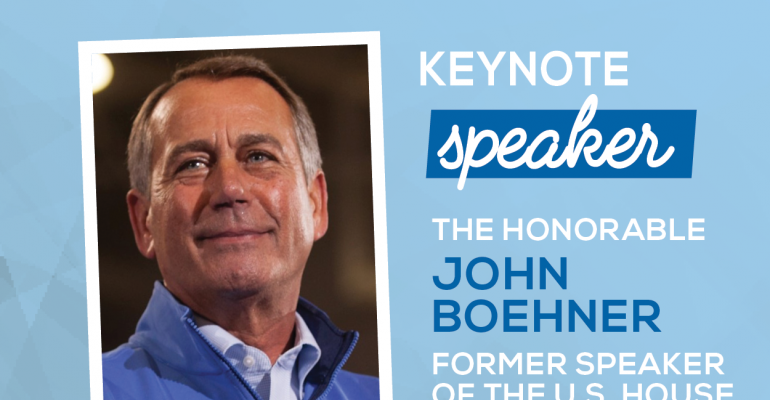 Former Speaker of the House to keynote 2017 NGA Show

The National Grocers Association has announced that former Speaker of the House John Boehner will deliver the opening keynote address during the 2017 NGA Show at the Mirage Hotel and Casino in Las Vegas on Feb. 12-15.

A former small-business owner, Boehner served for nearly five years as the 53rd Speaker of the House. The Cincinnati native was first elected to Congress in 1990. He was chosen speaker in January 2011 and left Congress in October 2015, after nearly 25 years of representing Ohio’s 8th Congressional District.

"We are excited to have former Speaker Boehner join us as the keynote speaker for our 2017 Show," said NGA president and CEO Peter J. Larkin. "Given his wealth of knowledge, along with his small business background, and of course his candor, I can’t think of anyone better suited to stimulate dialogue and provide insight about the current political and economic issues and how they will impact independent grocers.”

“Whether you own one store or operate a multi-store chain, there isn’t a one-size-fits-all approach to being successful in the supermarket industry,” Larkin said. “Staying ahead of the curve in a variety of areas is vitally important. We believe these enhanced aspects of the show, specifically the newly focused workshop tracks, will ensure that attendees will leave Las Vegas with the necessary resources, tools and solutions to address shifting demands and marketplace challenges, and ultimately help them grow their bottom line.”