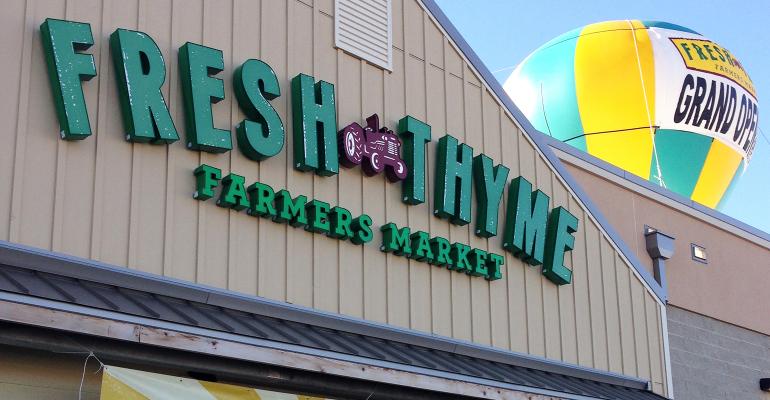 Fresh Thyme is shifting its priorities heading into 2018 as the retailer slows its rate of new-store growth to ensure long-term success, CEO Chris Sherrell said.

In an interview with SN, Sherrell said the 68-store chain, based in Downers Grove, Ill., has entered a new phase of growth that will still see it expand rapidly but also take the time to fine-tune its operations. As previously reported, Fresh Thyme is planning to open 10 new stores in 2018, versus 20 new stores that opened in 2017.

The company, which began opening its affordably priced natural and organic stores in 2014 and has quickly ramped up to 68 locations, has evolved past its “start-up” phase, Sherrell said. “We decided to look at a different set of priorities,” said Sherrell (left). “Opening 10 stores [in 2018] isn't shabby, but we decided to go back and shore up the infrastructure, get the systems in place, get the technology up to speed — we're going to become a billion-dollar company very quickly, and we’ve got to make sure our systems are at par with that volume.”

As previously reported, Fresh Thyme bolstered its executive team with several food retailing veterans in the past year to help ensure that the right systems are in place for ongoing success, Sherrell explained. The new team will bring fresh insights and expertise to the management of the chain, he said.

“I've been probably doing too much for too long,” said Sherrell. “It's kind of at a pressure point where it was time to strengthen the team, and bring in some experienced executives to help us get to that next level.”

Among the priorities that Fresh Thyme plans to focus on in 2018 are delivery and ecommerce, technology, employee training and ensuring that its 320,000-square-foot distribution center in Bolingbrook, Ill., is “100% operational,” he said.

“We want to continue to use [the DC] as a strategic advantage,” he said, noting that the company’s new stores planned for Pennsylvania in 2018 will still be within reach of the warehouse.

“We are creating a logistical company here that will have 125 grocery stores within about 500-600 miles of our DC,” said Sherrell. “There's not a natural or organic grocery chain in the country that has that advantage.”

If the company continues expanding further eastward, it would consider opening another warehouse, he said, but the current facility should be able to support 125-150 stores in the next three to five years.

Fresh Thyme, which is backed by supercenter operator Meijer Inc., is also exploring opportunities to expand its ecommerce capabilities, Sherrell said. Three of the chain’s stores have been offering delivery through Amazon Prime Now, which has been “a great partnership,” he said.

Sherrell said Fresh Thyme could increase its new-store opening pace in 2019 with 15 or more new locations, and he said the company still remains on track to hit the 100-store mark in 2020.

In addition to the first two Pennsylvania stores previously announced for 2018, Fresh Thyme is also exploring other locations in the Pittsburgh area for additional sites, he said.

The company also shuttered two locations in 2017 — one in Lexington, Ky., and one in the Cincinnati area.

“We weren't going to open 100-plus stores without closing a couple,” said Sherrell. “You have to prune the bushes every once in a while, and we just came to terms that we were going to focus our energy on new stores and growth, rather than continue to lose money in those stores.”

The company has learned a lot about site selection, demographics, product mix and prototype design from its rapid rollout that will help refine its expansion in the future, he said.

Looking ahead, Sherrell said he has a bullish outlook for 2018 and beyond.

“Organic grocery is here to stay, and we continue to feel that we are well-positioned at a perfect time,” he said. “There's not much competition when it comes to this type of format in the Midwest, like there is in the South and the Southwest, so we remain encouraged, and we're looking forward to one of the most successful years we've had in 2018.”