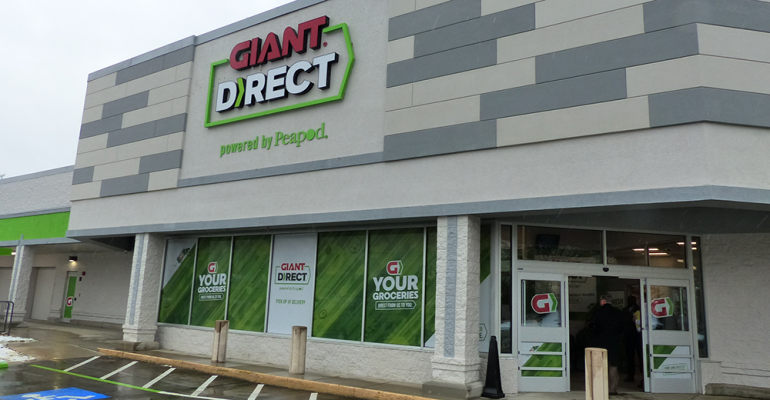 Giant Food Stores is shifting its omnichannel push into high gear with the debut of its first Giant Direct Powered by Peapod e-commerce hub in Lancaster, Pa., according to Giant President Nick Bertram.

“It signals that we’re doubling down on e-commerce,” Bertram (pictured) told Supermarket News Tuesday at a grand opening event for the 38,000-square-foot facility. “It’s a channel that grew really fast for us in 2018. We actually ran out of capacity to grow. So this answers that question but also opens up new ZIP codes that we couldn’t service. And it will take pressure off some of the other facilities. So as we maximize our network for delivery, this is a really important solution.”

Related: Getting up close at Giant’s new e-commerce hub 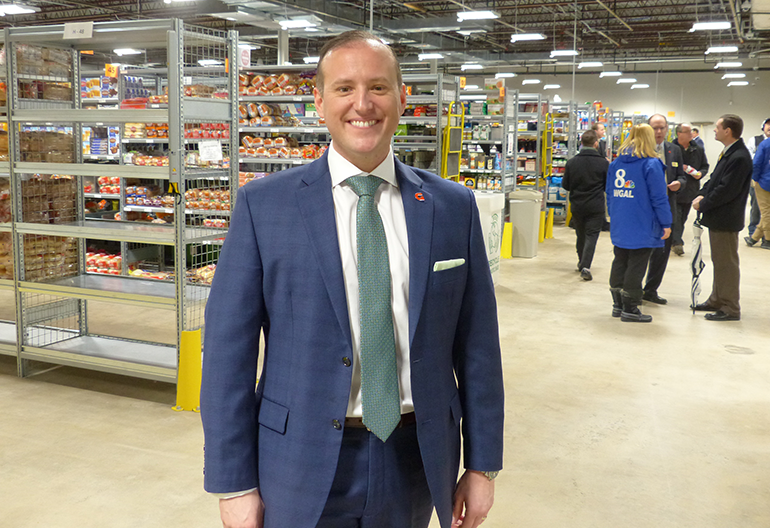 Built on the site of a closed Giant supermarket, the Giant Direct hub at 235 North Reservoir St. in Lancaster serves as a curbside pickup site and grocery delivery center. Customers order groceries through the retailer’s Peapod online service and app or the Giant website.

Parking spaces labeled “Pick Up Here” let online customers drive up and have their orders brought to their cars. The facility also houses a walk-up vestibule with tablets and fresh lockers for placing and picking up online grocery orders. Items are pulled from rows of bar coded shelves and refrigerated and frozen cases in the hub’s warehouse.

“We have five altogether. I think there’s still need, so we’re constantly looking for ways to expand our service even further. And that will be part of the work we do this year,” he said. “We’re also launching click-and-collect in many of our stores this year as well, which will be another part of the e-commerce offering and what we committed to do last year.”

“With Peapod Digital Labs, we have state-of-the-art networking software and mapping. They can tell us exactly where we need to have more capacity, and then we work together to build facilities to do that or to change the transportation schedules,” Bertram explained.

“Peapod plays a huge part, because it really is the backbone and the expertise,” he added. “But Giant Direct will become our e-commerce brand as we go through the year. We will gradually introduce it because it takes time to roll out all of these changes that we’re making.” 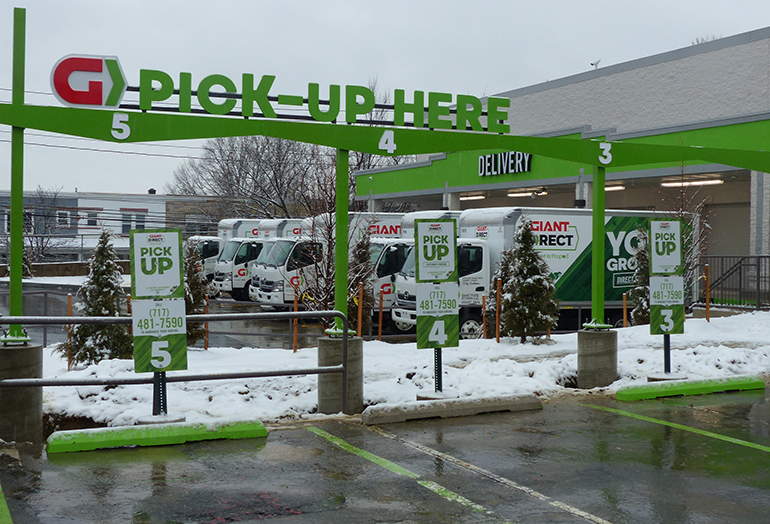 The first location, a 9,500-square-foot store, opened Jan. 25 at in the Graduate Hospital section of downtown Philadelphia. Next up this year are Heirloom Markets in the city’s University City, Northern Liberties and Queen Village districts.

“We’ve mentioned that we can’t really reach our full potential unless we got more serious about Philadelphia. We’re a strong No. 2 player in the Philadelphia DMA [designated market area], but if you look at Center City, we only had one store on the north side. So there’s a need, and we’re answering that need in a unique and innovative way,” Bertram said. “The first store opened in Graduate Hospital, and we’re very happy with the response — both anecdotally and how the business is performing, which is a little better than what we expected. So we’re optimistic and, therefore, are pushing forward into three other neighborhoods this year.”

The University City store is due to open this summer between Drexel University and the University of Pennsylvania, serving a customer base of students, faculty and administration. Slated to open its doors in the fall is the Northern Liberties store, situated across from Schmidt’s Commons, a public plaza with boutiques and restaurants. The Queen Village location, on South Street, is expected to open by the end of the year.

“The first store is only 9,500 square feet, and it’s performing in a way that we’re pretty excited about. I think it opens up a lot of opportunities,” he said. “There’s still a lot to learn; it’s in its early days. You can’t call it a homerun just yet, but it’s certainly at least a double at this point.”

“I’m excited about that one because it has much more pedestrian traffic than any of the other sites,” he said. “What I love about this [Heirloom Market] is that we’re having to innovate to each neighborhood, because they really are very different. So we’re able to flex what makes Giant Giant but then add in some things that we are learning how to do with neighbors and local purveyors. I think the University City store is going to be a real example of that.”

The concept, too, dovetails with Giant’s e-commerce strategy as a way to extend its reach and cater to shoppers, he added. “We’re always looking for more ways to meet customers’ needs. E-commerce is a great channel for us inside Philadelphia as well as in all five counties in the DMA. So between that and our great supermarkets in the suburbs, we have a lot to offer Philadelphians.”