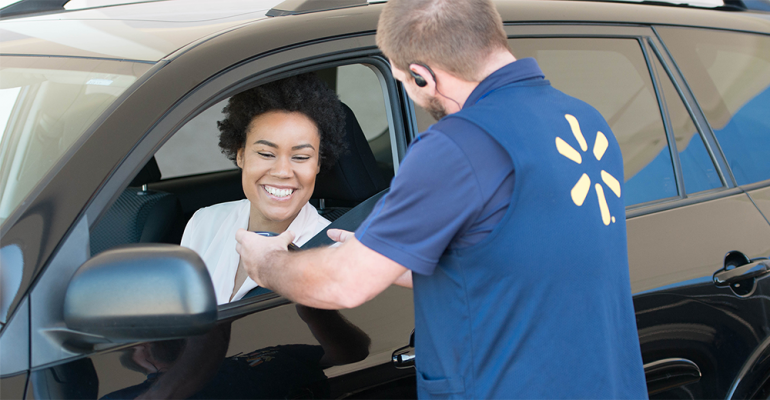 At the bottom line, Walmart topped Wall Street’s consensus earnings-per-share forecast by 11 cents, despite headwinds in the Walmart International unit.

Walmart U.S. posted net sales of $80.3 billion, up 3.3% from $77.7 billion a year ago. Same-store sales climbed 3.4% excluding fuel, with transactions (now including e-commerce) up 1.1% and ticket size up 2.3%. E-commerce sales surged 37% year over year and contributed 140 basis points to the comparable-sales result, Walmart said.

Grocery and health/wellness (including pharmacy) saw comp-sales increases in the mid-single digits during the quarter, compared with low single digits for general merchandise. In grocery, the snacks, beverages and pet categories were particularly strong, according to Walmart. 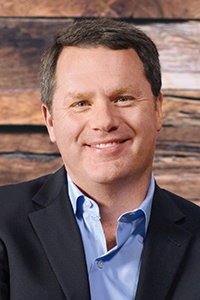 “Strong comps helped us gain market share in key categories, including food and consumables, and we delivered good results during the Easter holiday period,” Walmart President and CEO Doug McMillon (left) told analysts in a Thursday morning conference call. “We’ve made good strides in fresh and continue to make progress with the quality of our private brand offering, especially in food, where penetration increased 156 basis points during the quarter,” he added.

Chief Financial Officer Brett Biggs noted that the robust comp-sales increase came despite the headwinds from accelerated SNAP benefits, which had pulled funding into the fiscal 2019 fourth quarter.

“Online grocery remains a meaningful contributor to e-commerce growth. The U.S. business continues to benefit from a healthy economic environment, but we’re also pleased with customers’ response to our integrated omnichannel offering. Market-share gains this quarter in key grocery and general merchandise categories reflect our progress,” Biggs said in the call. “Comp-sales growth reflects strength in grocery, including private brands.”

“Customers continue to really appreciate our grocery pickup and delivery offerings as we scale them across the U.S.,” he said. “We’re on track to offer same-day grocery delivery from 1,600 stores while also offering grocery pickup from 3,100 stores by year-end, providing coverage to approximately 50% and nearly 80% of the U.S. population, respectively. Customers want product faster than ever before, and Walmart is the best positioned in the industry to deliver grocery same-day.”

At Sam’s Club, net sales in the fiscal 2020 first quarter rose 1.5% to $13.8 billion from $13.6 billion a year ago. Comp-store sales inched up 0.3% excluding fuel (3% excluding fuel and tobacco), reflecting a 4.7% gain in transactions (including e-commerce) and a 4.4% decrease in ticket size. In food and grocery, the snacks, soda, spirits and candy segments generated mid-single-digit growth, while prepared meals, deli and frozen performed saw comp-sales increases in the low single digits.

E-commerce sales at Sam’s advanced 28% year over year, contributing 140 basis points to comp growth, while membership income was up 0.9%.

“Investment in fresh categories, price and free delivery for Plus members continue to resonate and are contributing to transaction increases and comp-sales growth,” Biggs said.

“In the U.K., we are disappointed that the proposed merger of Asda with Sainsbury’s isn’t happening, because it would’ve been good for customers and the businesses,” McMillon said in the call. “Asda continues to focus on delivering against our strategy and has built momentum in the business, which is impressive.”

Biggs said seven of 10 markets had positive comp-sales results in the quarter. “We’re managing through political and economic headwinds in several of our international markets, which contributed to a bit weaker results this quarter than we’ve had recently,” he explained. “In addition, as Doug mentioned, we were disappointed in the CMA’s [Competition and Markets Authority’s] decision in the U.K. We’re focused on continuing to execute the strategy to strengthen Asda’s long-term success, including the potential of an IPO at some point in the future. We’ll be thoughtful and measured in our approach.”

On the earnings side, consolidated net income attributed to Walmart in the 2020 first quarter totaled about $3.8 billion, or $1.33 per diluted share (GAAP), compared with $2.1 billion, or 72 cents per diluted share, in the 2019 period. Walmart said adjusted EPS — excluding an unrealized net gain of 20 cents from its JD.com investment — came in at $1.13 versus $1.14 a year earlier. The 2019 quarter includes a net impact of 42 cents from an unrealized gain from the JD.com investment and a tax reform adjustment.

Analysts, on average, had projected adjusted EPS of $1.02, with estimates ranging from a low of 97 cents to a high of $1.04, according to Refinitiv/Thomson Reuters.

“We’re pleased with how we started the year,” McMillon said. “We have a stronger foundation in place with our stores, and we’re making good progress in e-commerce. We’re embracing new processes and technologies with the goal of serving our customers even better.”