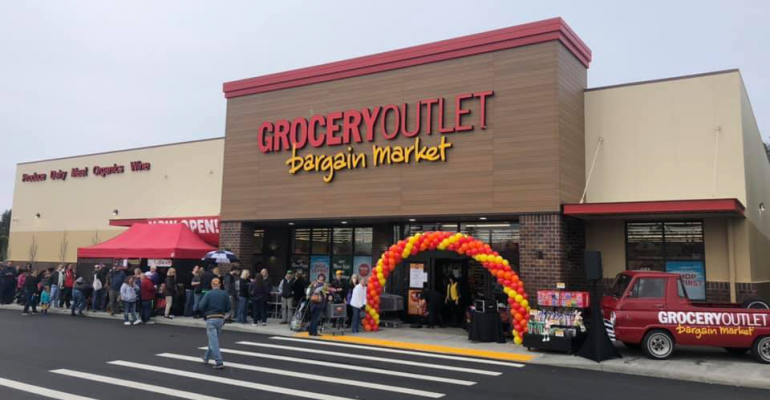 With an eye toward big expansion, Grocery Outlet Bargain Market is moving ahead with an initial public offering.

The extreme-value grocery chain this week filed a Form S-1 registration statement with the Securities and Exchange Commission for an IPO of common stock. The proposed maximum aggregate offering, in part an estimate for calculating the registration fee, is for $100 million.

At this time, the share price range, number of shares and offering date haven’t been disclosed. The company, which made the filing as Grocery Outlet Holding Corp., would trade on the Nasdaq Global Select Market under the symbol “GO.”

Emeryville, Calif.-based Grocery Outlet currently has 316 stores in California, Idaho, Nevada, Oregon, Pennsylvania and Washington. Sales rose 10.2% to nearly $2.29 billion in 2018, with same-store sales up 3.9% and reported net income per share of 33 cents.

Grocery Outlet opened 26 new stores last year and aims to open 32 during 2019. The chain trumpets big discounts on brand-name products, offering savings of 40% to 70% versus conventional retailers, achieved through a sourcing model of purchasing surplus inventory and product overruns directly from thousands of supplier partners. Stores are run by independent owner-operators from the communities they serve and carry a full range of groceries, including fresh produce, meat and deli; dairy; beer and wine; natural and organic items; health and beauty aids; and seasonal items. The company describes itself as the nation’s largest and fastest-growing extreme-value grocery retailer.

“We believe there is an opportunity to establish over 400 additional locations in the states in which we currently operate and approximately 1,600 additional locations when neighboring states are included,” Grocery Outlet said in the May 13 IPO filing. “Our goal is to expand our store base by approximately 10% annually by penetrating existing and contiguous regions. Over the long term, we believe the market potential exists to establish 4,800 locations nationally.”

Beginning this year, Grocery Outlet transitioned its leadership from a dual-CEO structure. The company’s board of directors in late December named Eric Lindberg as CEO and MacGregor Read as vice chairman effective Jan. 1. They had served as co-CEOs since 2006.