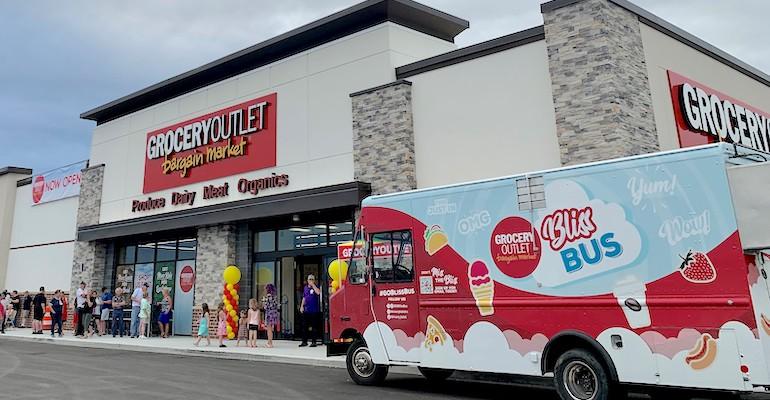 Grocery Outlet Holding Corp. has expanded its brick-and-mortar footprint to eight states with the debut of its first location in Maryland.

As part of the Hagerstown store’s grand opening celebration, through July 14 customers can enter for a chance to win $1,000 in groceries. Prizes also include over 20 $50 rewards certificates. The first 100 shoppers attending the store’s ribbon-cutting ceremony received Grocery Outlet Bliss Bucks gift cards in mystery amounts ranging from $5 to $250.

Also with the grand opening, the Eldreds presented donations of $1,000 each to The Hope Center Hagerstown and the LifeHouse Church.

Describing itself as an “extreme value” retailer, Grocery Outlet touts big discounts on brand-name products and has said a typical shopper basket is priced about 40% lower than that of conventional grocers and 20% lower than leading discounters. Stores are run by independent owner-operators from the communities they serve, enabling locations to cater to changing customer preferences. Shopper savings is achieved through a sourcing model of procuring surplus inventory and product overruns directly from thousands of supplier partners. That includes a changing assortment of products with “WOW!” prices, creating a “treasure hunt” shopping experience.

“We remain on track to open 28 net new stores during the year, including approximately 10 stores in the Mid-Atlantic area as we expand our footprint in the East,” Grocery Outlet CEO Eric Lindberg said last month in a conference call on Q1 results.