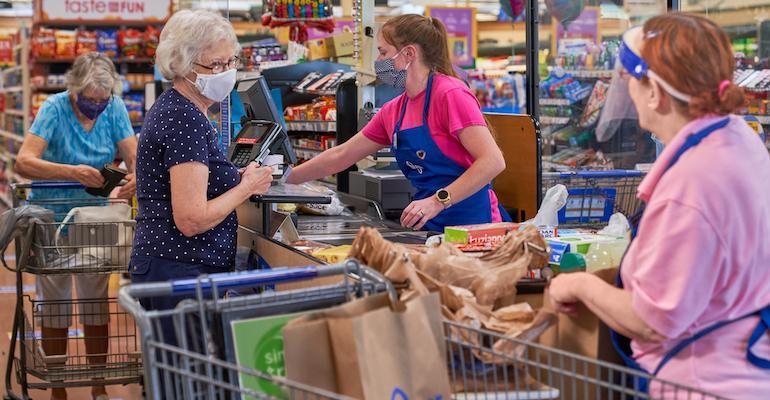 Kroger
A 12% gap between food retail and foodservice market share as of March 2021 would translate into $100 billion of growth for grocery retailers if stretched over the full year, FMI’s study projected.
News>Retail & Financial

Grocery retailers will hold an edge in food spending market share over the foodservice sector as the nation heads into the post-pandemic period, according to FMI-The Food Industry Association’s annual U.S. Grocery Shopper Trends study.

At the same time, within grocery retail, mass merchants have been absorbing share from traditional supermarkets, revealed FMI’s report, prepared in tandem with The Hartman Group.

The outbreak of COVID-19 in February 2020 reversed a decades-long trend of market share gravitating from retail to foodservice, which ended up benefitting grocery stores at the expense of restaurants.

Food-at-home market share fell from over 60% in 1992 to under 50% around 2014-15, while food-away-from-home share climbed from less than 40% to over 50% in that time frame, U.S. Census Bureau data cited by FMI show. That trend continued until February/March 2020, when the onset of the pandemic began to flip-flop market share in favor of food retail.

Monthly revenue for food retail hit its peak in April 2020, surging 27% to represent 70% of all monthly food spending, whereas share for foodservice plunged to 30%. The relaxing of COVID cases and pandemic restrictions in the following months helped the restaurant sector restart businesses and win back share, but through March 2021 its monthly revenue remained 17% below earlier levels, FMI reported in the U.S. Grocery Shopper Trends 2021 study, released in late May.

Leslie Sarasin, president and CEO of FMI, noted the “suddenness” of the food market share shift toward grocery retailers from foodservice.

“Within three weeks, 30 years of gains and losses were erased,” Sarasin said in a webinar this month on the Grocery Shopper Trends findings. “Restaurants have bounced back some by adjusting their business practices, finding innovative ways to serve their customers and having limited reopenings. But there remains a 12% gap in food retail's favor.”

That 12% gap as of March 2021 would translate into $100 billion of growth for grocery retailers if stretched over the full year, FMI’s study projected.

“The extent to which this elevated food retail spending continues depends much on the actions of those in the business of producing and selling food to retain customer loyalty beyond the pandemic,” Sarasin pointed out.

Household weekly spending for groceries (among all shoppers)

“That’s a dramatic rise, $142 per week on average, which would be between 15% and 20% higher than pre-pandemic,” said webinar participant David Feit, vice president of strategic insight at The Hartman Group. “So that’s where all the sector-level sales receipts are coming from. Whether that [dollar figure] goes up, stays flat or goes back down depends on what will go on with shoppers, what stayed the same for them and what has more fundamentally changed.”

Post-pandemic, many Americans will look to grocery stores as COVID-shaped eating and food spending behaviors continue. FMI’s study found that 58% of more than 2,000 consumers polled eat at home more since the pandemic, and 49% cook or prepare their own meals more often. Similarly, 46% keep more food on hand stored at home, 38% spend more money on groceries, with 34% shopping for food online more often.

“Retailers must compete with foodservice on the playing fields of convenience, ease of ethnic options, affordability and culinary experience,” Sarasin said. “Many consumers have learned during the pandemic that home-prepared meals are not only healthier and more economical, but they can actually be quicker, too. Retailers have a chance to deepen that experience but should be seeking ways to amplify convenience, nutrition and ease.”

Primary channel (among all shoppers)

Those efforts will come amid a grocery shopper shift away from supermarkets and toward the mass channel, the FMI/Hartman findings show.

“Channel usage has definitely evolved over the past year as channels other than supermarkets have gained regular shoppers,” Steve Markenson, director of research and insights at FMI, said in the webinar.

“Just three years ago, a supermarket was the primary store for close to half of shoppers (49%), but as of early 2021, 61% indicate a store in another channel,” FMI’s study said. “Mass has been the greatest beneficiary of this migration, growing its share to nearly that of supermarkets, but club and online-primarily (e.g. Amazon Fresh, etc.) have also gained.”

“A dramatic change in grocery shopping during the past year has been the shift in which types of retailers shoppers considered to be their primary store, where they spend the most on their groceries,” Markenson said. “Mass now actually rivals supermarkets for top honors as the primary channel chosen by shoppers. The primary store has clearly shifted away from supermarkets towards mass, club and online channels.” 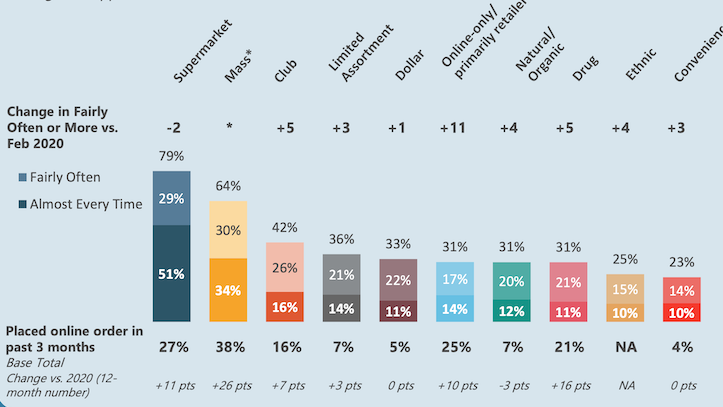 A big reason for the grocery shoppers’ migration to mass merchants is e-commerce. FMI’s study found that 38% of food shoppers placed an online order with a mass merchant within the past three months as of February 2021, up 26 points from a year earlier. In comparison, the share of consumers placing online orders in that time span was 27% at supermarkets (+11 points), 25% at online-focused retailers (+10 points), 21% at drugstores (+16 points), 16% at clubs (+7 points), 7% at limited-assortment grocers (+3 points) and 5% at dollar stores (flat versus a year ago).

“Online touchpoints appear to be a substantial driver of the shift away from supermarkets,” said Markenson. “Mass has been successful with the great draw of online shopping, with close to half of those shopping mass saying they purchased online from mass in the last three months. On the other hand, only about a third of placed online orders from supermarkets in that time frame.”