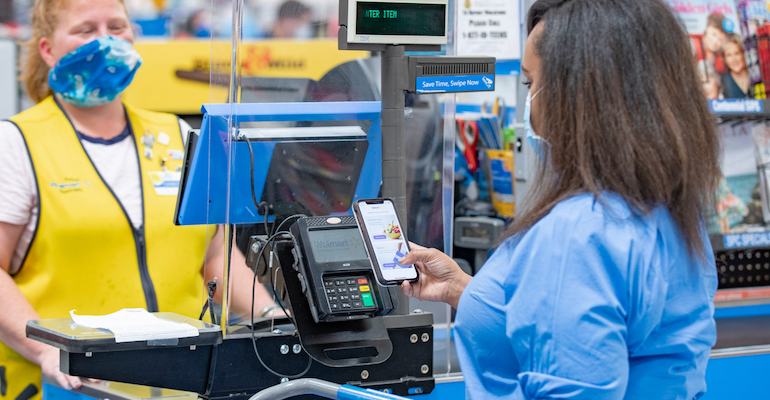 Walmart
The U.S. Census Bureau reported a 1.9% month-to-month sales gain for grocery stores in November, with a year-over-year increase of 10.5%.
News>Retail & Financial

Sales at grocery stores edged up nearly 2% in November despite a decrease in total U.S. retail sales for the month, according to advance estimates from the U.S. Census Bureau.

Food and beverage store sales, including grocery and beer/wine/liquor stores, rose 1.6% month-over-month to $71.37 billion (seasonally adjusted) in November, the Census Bureau said Wednesday. Grocery stores saw a bigger gain, with sales up 1.9% to $63.48 billion. On a year-over-year basis, November sales climbed 10.9% (adjusted) at food and beverage stores, reflecting a 10.5% increase at grocery stores.

That represented an improvement from October, when food and beverage store sales (adjusted) decreased 0.7% month-to-month (including a 0.6% dip at grocery stores) and were up 9.6% from a year earlier (including an 8.8% gain for grocery stores).

Related: Food-at-home will continue to drive grocery sales in 2021 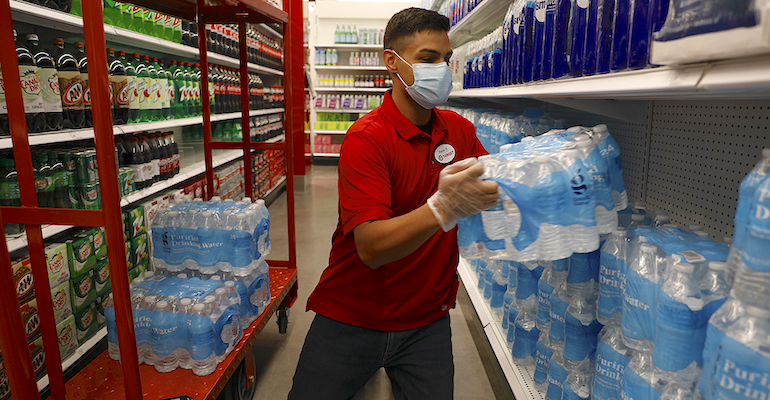 November food prices were up 3.7% (unadjusted) year over year, reflecting increases of 3.6% for food at home and 3.8% for food away from home.

Nielsen said consumers paid 3.1 percentage points more for the same popular grocery items in November versus a year ago, down slightly from 3.2 points more in October and 3.5 points more in September. Fewer promotions since the coronavirus pandemic hit continue to keep prices up, the CPG market researcher noted.

“The promotional activity across the total store has mostly leveled off, though at a slightly higher level than previous months,” Nielsen stated about November pricing. “Still, with fewer promotional offers being made available to shoppers than pre-COVID times, their grocery bills are higher than this same time last year.” 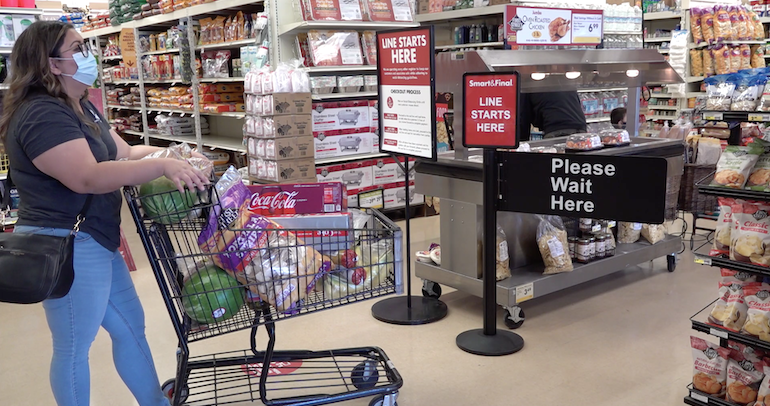 Grocery and beverage stores were among seven of nine retail sectors that generated year-over-year sales gains in November, according to the National Retail Federation.

Overall, U.S. retail and foodservice sales declined 1.1% to $546.5 billion (adjusted) in November, the Census Bureau said. Retail trade sales — excluding motor vehicles and parts and gas stations — were down 0.8% sequentially to $493.3 billion in November. Year over year, total retail and foodservice sales grew 4.1% for November, with retail trade sales up 7.1%.

Besides grocery and beverage, the only retail trade sectors seeing month-over-month gains were building material and garden supply stores (+1.1%) and non-store retailers (+0.2%), which includes online retailers, according to the Census Bureau.

“Consumers held back on spending in November as virus rates spiked, states imposed retail restrictions and congressional stimulus discussions were gridlocked,” National Retail Federation (NRF) President and CEO Matthew Shay said in a statement on Wednesday. “While consumers have been bolstered by increases in disposable income and savings, it’s clear that additional fiscal stimulus from Congress is needed, and we are hopeful it will be passed soon as we enter the final stretch of the holiday season. With retail sales up 8.8% versus November 2019, we still expect a strong holiday season compared with last year.”

NRF has projected 2020 holiday sales to grow between 3.6% and 5.2% versus the 2019 season. The association, which defines the holiday season as Nov. 1 to Dec. 31, said its research shows that 42% of consumers started holiday shopping earlier than usual this year. On average, consumers had about half their holiday shopping left to do as of Thanksgiving weekend.

“The month-over-month decline [in November] isn’t surprising because some spending was pulled forward into October by campaigns encouraging consumers to shop early and shop safe,” according to NRF Chief Economist Jack Kleinhenz. “Despite that, as we go into the final weeks of 2020, year-over-year trends show spending is holding up well regardless of month-to-month fluctuations. Nonetheless, we have to remember the remainder of the holiday season depends critically on the virus. We are optimistic, but spending could shift into a lower gear if the virus continues to spread.”