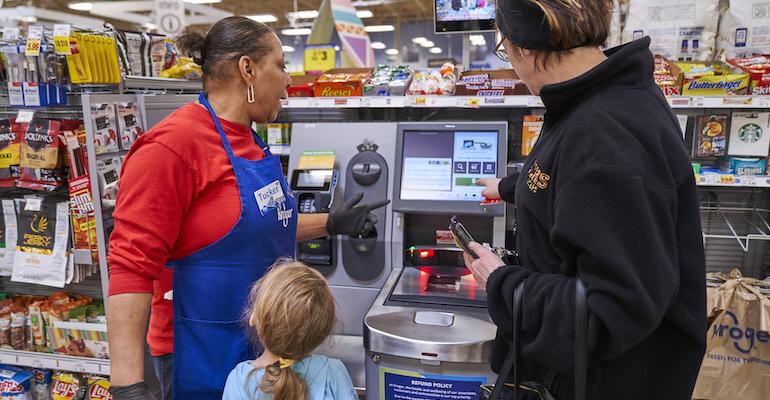 Reflecting the latest Consumer Price Index, U.S. retail sales in July were flat versus the previous month and up significantly from a year ago, with grocery stores in line with that trend.

In June, overall retail sales had edged up 1% month to month and grown 8.4% year over year. June retail trade sales, similarly, increased 1% sequentially and 7.7% versus a year before.

For June, grocery store sales advanced 0.6% from May and were up 8.3% from a year earlier, while food and beverage store sales gained 0.4% sequentially and 7.1% year over year. 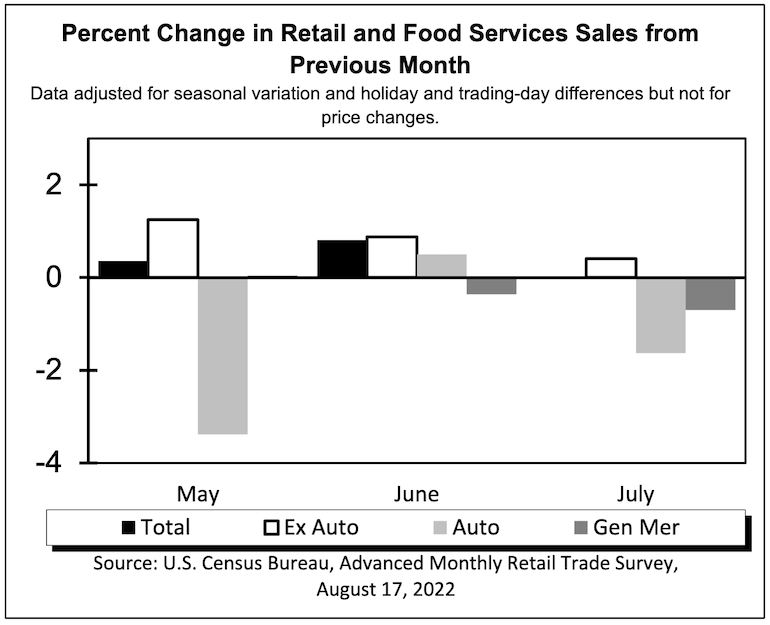 “Today’s retail sales number is a direct reflection of inflation’s impact on consumer spending. Americans have had to trade down or delay purchases as inflation continues to squeeze household budgets, and that’s apparent in today’s 0.0% month-over-month change in retail sales,” Claire Tassin, retail and e-commerce analyst at data intelligence firm Morning Consult, said in a statement when the Census Bureau released July sales data on Wednesday. “There’s good news in these numbers though, as gasoline spending declined from June to July (but of course is still up significantly over last year). Online sales growth (up 2.7%) is noteworthy as well, as the share of consumers who shop online for the purpose of saving money has risen in recent months.”

“This is interesting considering, more parents planned to shop for back-to-school supplies in July, which would have bumped up sales for electronics, apparel, department stores and general merchandise,” Jaggi commented. “However, non-store retailers were up 2.7% from the previous month, which means parents were likely buying school supplies and clothes online. This is consistent with the share of parents who plan to have at least some of their back-to-school purchases shipped to their homes, surging 14% points to 61.7%, according to JLL’s Back-to-School survey.”

U.S. retail sales got a slight lift in July as the CPI eased from the previous month and fuel prices continued to decline, according to the National Retail Federation (NRF). Last week, the U.S. Bureau of Labor Statistics (BLS) reported that the July Consumer Price Index (CPI) was flat month to month (seasonally adjusted) but up 9.1% year over year. Inflation continued to rise in July for non-discretionary categories like grocery, however, as the food-at-home index edged up 1.1% month over month and 12.2% year over year, the largest gain since the 12 months through April 1979, according to BLS.

“Retail sales grew in July, supported by declines in prices at the gas pump and moderately lower inflation,” NRF President and CEO Matthew Shay stated. “Consumers are adapting to higher prices by prioritizing essentials like food and back-to-school items, and retailers are working hard to absorb the impact of higher costs and help customers stretch their hard-earned dollars.”

Washington-based NRF’s estimate — which excludes automobile dealers, gas stations and restaurants to focus on core retail — had July retail sales rising 0.8% on a seasonally adjusted basis from June and climbing 7.1% unadjusted year over year. In June, sales increased 0.6% month to month and 6% over 12 months, NRF said.

“Retail sales were up considerably compared with a year ago, even though consumers are more discerning in this economic environment,” NRF Chief Economist Jack Kleinhenz observed. “Consumer spending was an encouraging signal as the economy kicked off the third quarter. Nonetheless, inflation is still disturbingly high, even as it eases, and is the most important challenge for consumers and retailers. The future path of inflation remains a key factor for the economy and monetary policy as the Federal Reserve works to bring price increases under control.”