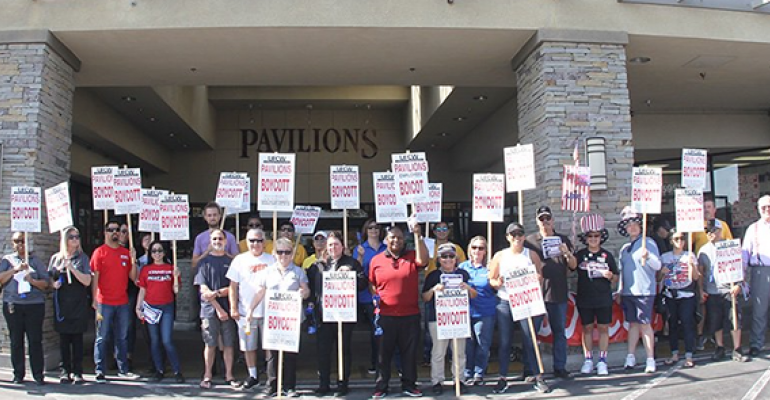 A grocery workers strike is looming in Southern California as United Food and Commercial Workers (UFCW) employees at more than 500 Ralphs, Albertsons, Vons and Pavilions supermarkets next week plan to vote on the retailers’ contract proposals.

Negotiations with UFCW Locals 770, 324, 1167, 135, 8, 1428 and 1442 resumed Sept. 4 and run through Sept. 8. The union locals said that, during the week of Sept. 9, they plan to hold votes for members to accept or reject the grocers’ latest offers. The Ralphs stores are part of Cincinnati-based Kroger Co., while the Albertsons, Vons and Pavilions stores are operated by Boise, Idaho-based Albertsons Cos.

In late June, members of the seven UFCW locals authorized union leaders to call a strike against the stores if talks for a new three-year contract failed to progress. Heading into this weekend, a strike appeared to be in the offing as union members held meetings to organize picketing. UFCW 770 earlier this week described the meetings as “final preparations for a Southern California strike.” Demonstrations also have been held outside stores in recent weeks as grocery workers looked to rally customer support.

According to the union locals, the retailers have proposed below-cost-of-living wage hikes, cashier wage reductions and questionable funding for the health care plan. The current contract, which expired March 3, covers more than 46,000 Southern California workers at the four supermarket banners.

Ralphs and Albertsons have said their proposals offer fair wages and benefits and preserve jobs while keeping their stores successful in a highly competitive grocery market.

“We remain committed to reaching an agreement that will provide our employees with a competitive compensation package that includes good wages, maintains their affordable health care and provides for their retirement while, at the same time, continuing to keep our company competitive in the Southern California market,” Albertsons Cos. said in a statement yesterday. 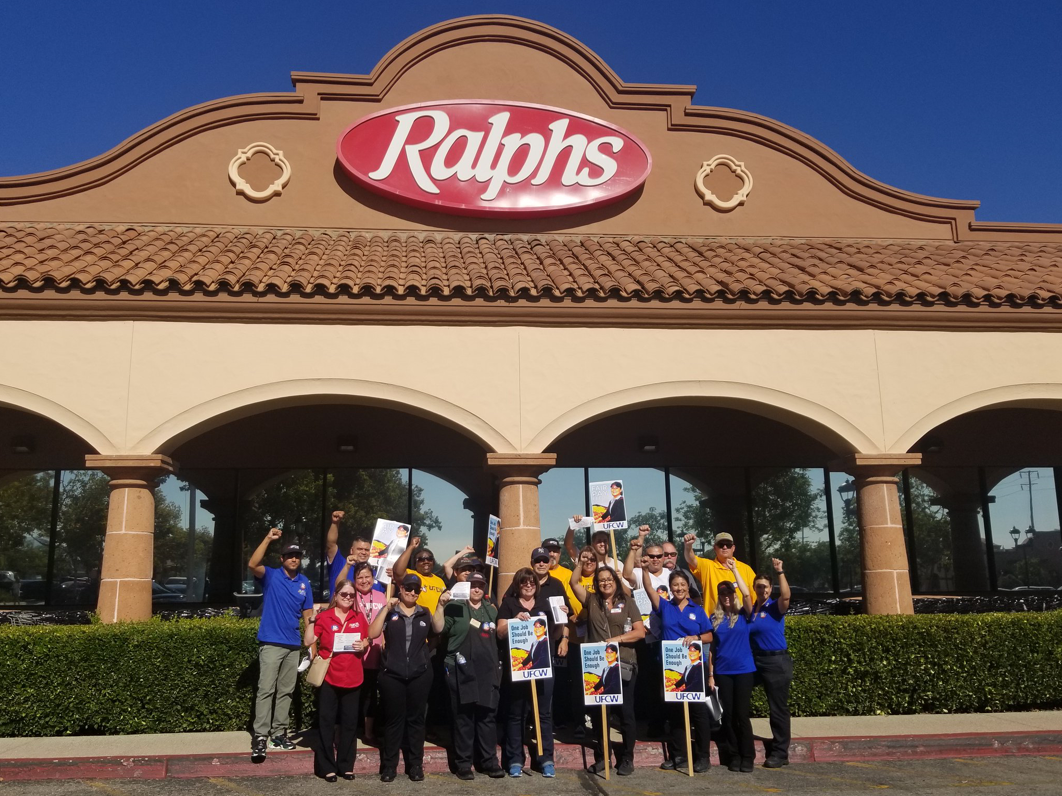 One sticking point for the union was a report last month by Ralphs saying that every 5 cents above its current wage offer would mean another $3.6 million invested into 17,000-plus hourly workers over the term of the three-year contract.

“Kroger and Albertsons continue to only offer nickels in wage increases while violating labor laws and your rights during negotiations. We believe that one good job should be enough to provide for you and your families; your employers think that one more nickel should be enough,” UFCW 135 said on its website.

The local plans to hold contract/strike votes on Sept. 9 and 10. “All Southern California locals will be holding meetings starting Sept. 9 to vote to accept or reject the employers’ final offer. We have also filed unfair labor practice charges against both companies and will provide more information at the meeting,” UFCW 135 stated. “Despite what your managers may have told you, you do have the right to handbill outside of your stores and participate in union activity.”

UFCW 770 said Wednesday that a “decision on further actions” is expected after next week’s votes on the latest contract proposal. The local noted that thousands of UFCW members participated in a customer outreach campaign last week targeting the 196 Ralphs stores in the region, in which they offered shoppers six-hour notice if a strike should occur.

“The grocery corporations continue to drag their feet and refuse to bargain fairly. Despite profits of more than $2 billion and combined tax benefits of $2 billion, the corporate owners of Ralphs, Vons and Albertsons are offering wage increases far below the cost of living and threaten to bankrupt the employee health care plan,” UFCW 770 said in a statement. “The grocery employees' union, UFCW, has conducted more than 30 bargaining sessions with Ralphs' parent company, Kroger, and Albertsons since the workers' contract expired in March.”

Los Angeles-based Ralphs said this week that its current offer, as of bargaining through Aug. 25, would invest more than $112 million in additional money over the life of the new contract.

“We will be doing everything we can to reach a fair and balanced agreement with the union in the coming days. We have the same goal: Reach an agreement that is good for you, rewarding you for your hard work while at the same time keeping Ralphs successful in the Southern California market, providing secure and stable jobs for everyone,” Ralphs said in its labor negotiations update on Wednesday. “As bargaining continues this week and through the weekend, we promise to keep you updated as we have information to share. Our recent offers reflect our total investment in you — more money in your pocket, more money to support and maintain your exceptional health care benefits, and more money to keep your pension benefit secure and stable throughout the life of this agreement.” 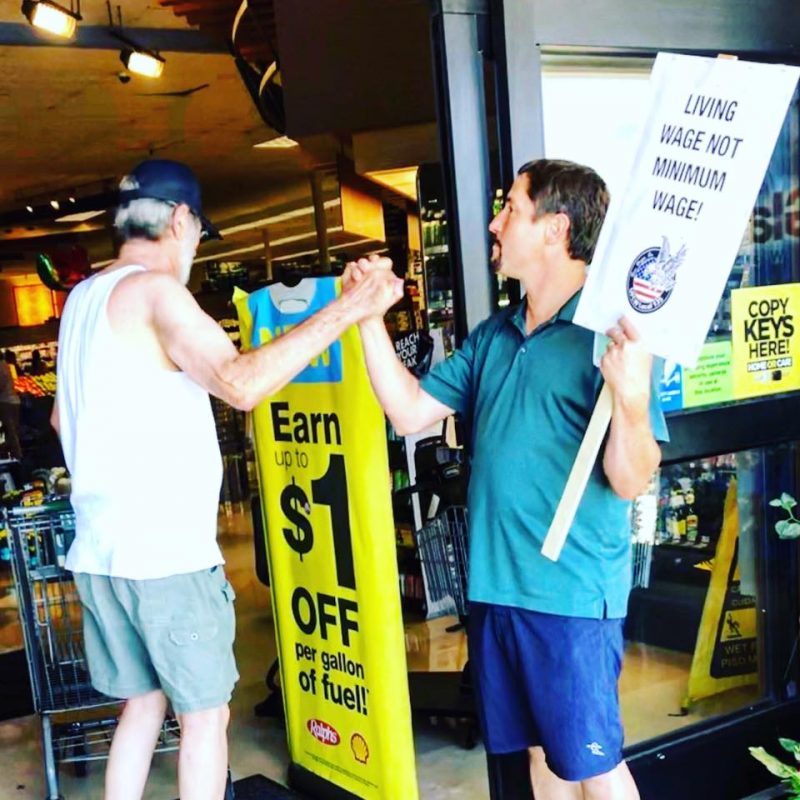 Ralphs said its latest wage proposal includes “top-rate increases” for GM, food and meat clerks that are higher than the wage hikes in the previous contract, which union members ratified in 2016. The increase translates to $1.10 over the three-year term of the contract. The retailer said it also has proposed to renew the minimum wage letter, in which associates currently paid at minimum wage would receive an increase to lift their rate above that level whenever a new law is enacted.

Citing figures for parent company Kroger, Ralphs reported that each dollar in sales yields 1.4 cents in profit, with the rest going to costs — including employees, who represent the company’s second-largest investment. The retailer said that of every sales dollar, 78 cents goes to cost of goods, 13 cents to associate costs, 3 cents to fixed expenses, 3 cents to variable expenses and 2.6 cents to standard business expenses.

“With only 1.4 cents in profit for every dollar in sales, it’s more important now than ever to focus on increasing our sales and reducing expenses wherever possible so we can continue to provide good stable jobs and grow our business,” Ralphs said in the cost-breakdown report. “We know that our associates are the heart of our company. That’s why we continue to make investments in your pay and health care and pension benefits, plus offer additional perks and discounts just for you. Remember, our people are our second-biggest investment.”