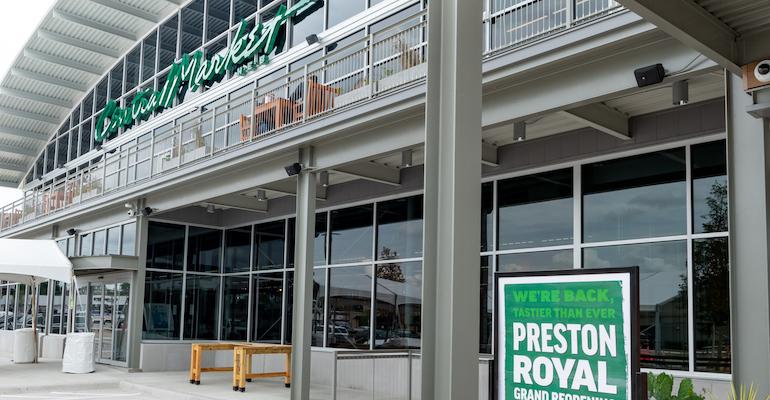 H-E-B
In rebuilding Central Market Preston Royal, H-E-B said it modified the floor plan to add new features inside and outside the store.
News>Retail & Financial

H-E-B on Wednesday reopened its Central Market Preston Royal supermarket near North Dallas, which had been shut 20 months for rebuilding and restoration after being destroyed by a tornado.

Located in the Preston Oaks shopping center, the roughly 35,000-square-foot Central Market sustained severe damage from tornados that swept through the area on Oct. 20, 2019. The flurry of storms ravaged the landscape of a 15-mile stretch in North Dallas, including 10 Dallas ISD schools, three of which were wrecked and unable to reopen at their original campuses.

H-E-B said it tweaked the floor plan in rebuilding Central Market Preston Royal to incorporate new features inside and outside the store. Key changes include the addition curbside pickup service, with 10 parking spots now along the south side of the store by the “Curbside” sign, plus an expanded café area with extra seating area on the renovated mezzanine level.

“Our Central Market partners and the entire Preston Royal community stepped up during this time of rebuilding and recovery,” Stephen Butt, president of H-E-B’s Central Market Division, said in a statement. “While this was a total community effort, I am especially proud of our Preston Royal partners who have gone above and beyond to continue to serve this neighborhood. The silver lining here is that our Preston Royal store is stronger and better, and we are ready to welcome back our loyal customers to provide them the service and shopping experience they deserve.”

One priority in the rebuild was to retain the store’s mid-century architecture, such as the vast, arched windows and curved roof facade original to the structure, H-E-B noted. The San Antonio-based grocer said its architects enhanced the mezzanine area to showcase the beams, windows and first-floor overlook. Also added were more energy efficient fixtures and equipment. H-E-B, too, reinstalled a four-panel painting by artist Cindy Holt that depicts the surrounding neighborhoods.

Cleanup and restoration of the Central Market Preston Royal started immediately after the storm, according to H-E-B. Although most of the surrounding buildings had to be leveled because of structural damage, rebuilding is continuing as the neighborhood shopping center looks toward its rebirth, the grocer said. Many of the approximately 130 Central Market associates returned to the reopened store. Following the storm, all employees were given the opportunity to transfer to another Central Market while the Preston Royal location was being rebuilt.

“The effort to rebuild what was lost has been a true partnership with our retail and community stakeholders,” commented Patrick Krejs, managing director at Regency Centers, developer of the Preston Oaks shopping center. “Our teams have been working tirelessly together to bring Preston Oaks back to life and to do it safely during a pandemic. I’m proud of the progress made and thrilled to see Central Market opening their doors again to the community.”

H-E-B also has focused on helping the community recover. As part of the store’s reopening on June 30, Central Market donated $20,000 to Preston Hollow Elementary School and $20,000 to St. Mark’s School of Texas, which is adjacent to the store. 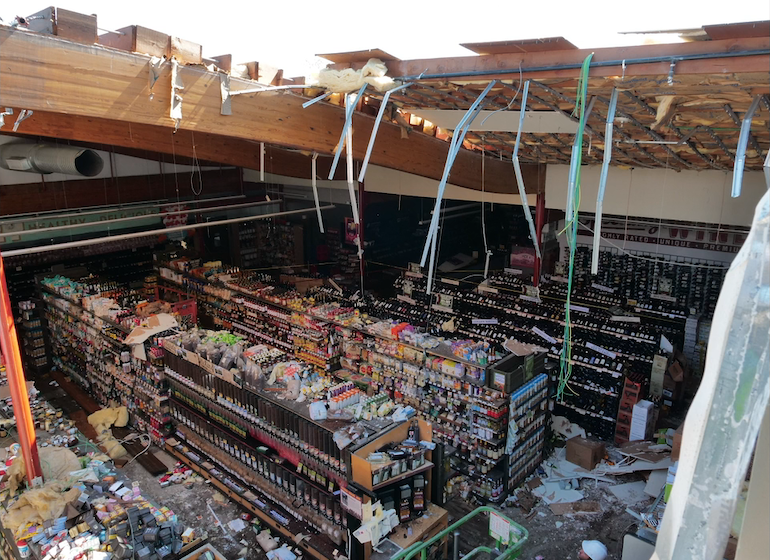 Located in the Preston Oaks shopping center, the Central Market sustained severe damage from tornados that ravaged a 15-mile stretch in North Dallas in October 2019.

On the one-year anniversary of the tornado last October, H-E-B/Central Market made a $1 million gift to the Dallas Education Foundation to aid the Dallas ISD in rebuilding, and donated 50 new trees to the neighborhood via the RETREET organization. Also following the storm in October, Central Market contributed $50,000 to the Dallas Education Foundation for rebuilding libraries in the three schools damaged in the storms.

“I’m thrilled about the Preston Royal Central Market location, my Central Market, reopening and re-anchoring this shopping center that’s in the heart of Preston Oaks,” stated former Dallas City Councilmember Jennifer S. Gates. “I remember the damage the tornado wrecked in our neighborhood when I toured the area the day after the storm. Reopening it is yet another sign of recovery, and the meaningful investment into our children at Preston Hollow Elementary and St. Marks of Texas means so much after more than a year of zoom and then hybrid schooling.”