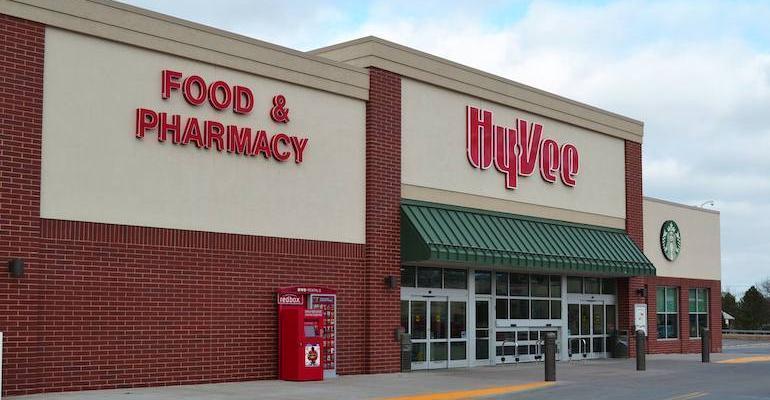 Hy-Vee
In a full-page advertorial in local newspapers, Hy-Vee said this week it will ask up to 500 corporate office employees to shift to retail management positions.
News>Retail & Financial

Hy-Vee is asking hundreds of corporate employees to move to retail jobs to meet store staffing needs and help the company become a leaner operation amid national concerns over a potential recession.

In a full-page advertorial running in local newspapers, West Des Moines, Iowa-based Hy-Vee said that this week it will ask up to 500 more corporate office employees to shift to retail management positions. Over 100 corporate staffers were asked to transition retail jobs last month, the company noted. 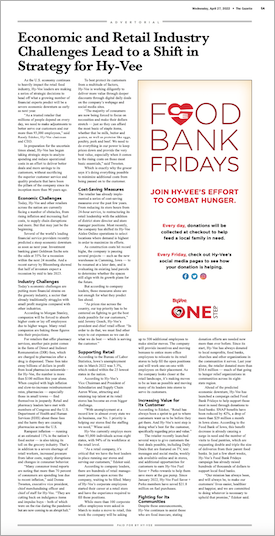 “As a trusted retailer that millions of people depend on every day, we need to make adjustments to better serve our customers and our more than 93,000 employees,” Hy-Vee Chairman and CEO Randy Edeker said in a statement in the advertorial, which ran in this week such publications as the Cedar Rapids Gazette and Des Moines Register.

Hy-Vee said it will provide incentives and moving bonuses to sway more corporate employees to relocate to retail stores to help fill open positions, as well as work one-on-one with staff on their placement. Hundreds of retail management positions are open across the company, “waiting to be filled,” said the Midwestern grocer, which operates more than 285 stores in Iowa, Illinois, Kansas, Minnesota, Missouri, Nebraska, South Dakota and Wisconsin.

In connection with the April 27 advertorial, a Hy-Vee spokeswoman said in an email that the company invited all corporate office employees to attend an internal job fair to see if any retail leadership openings would be a good fit. She said Hy-Vee has 400 store leadership positions open across its eight-state market area, in addition to other full-time opportunities.

“With unemployment at a record low in almost every state we do business, our No. 1 priority is helping our stores find the staffing we need,” Aaron Wiese, vice chairman and president of subsidiaries and supply chain at Hy-Vee, said in the advertorial, which indicates “Paid For By Hy-Vee” at the bottom. 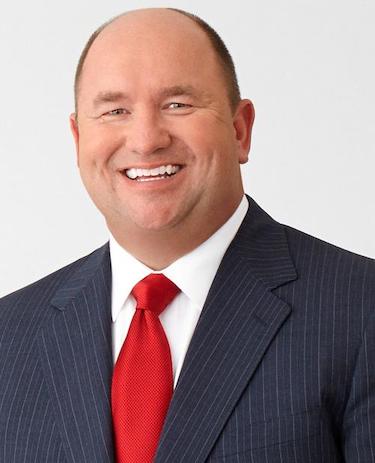 "We need to make adjustments to better serve our customers and our more than 93,000 employees." — Randy Edeker, Hy-Vee chairman and CEO (Photo courtesy of Hy-Vee)

Hy-Vee reported in the advertorial that 94% of its workforce is at the retail level, and many corporate office staff began their careers at a store and possess the experience to fill open retail positions.

“As a retail company, it’s critical that we have the best leaders in place running our stores and serving our customers,” Edeker stated in the advertorial.

Major financial firms say an economic downturn remains a strong possibility by next year, according to Hy-Vee. In the advertorial, the grocer said Goldman Sachs sees a 35% chance for a recession within the next 24 months, while Morgan Stanley expects businesses to be compelled to take on higher costs or cut their workforces due to increased wages. Hy-Vee also cited a recent survey from Bloomberg indicating that half of investors expect a recession to unfold by the middle or latter part of 2023.

Yesterday, the U.S. Bureau of Economic Analysis reported that real gross domestic product (GDP) fell at an annual rate of 1.4% in the 2022 first quarter, based on advance estimates. That comes after real GDP grew 6.9% in the 2021 fourth quarter and the nation hadn’t seen GDP shrink since the economic plunge at the onset of the COVID-19 pandemic. 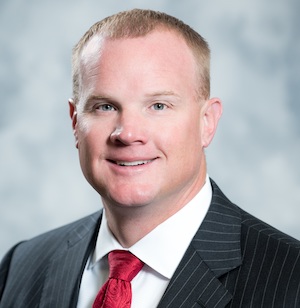 "We must find other ways to cut expenses so we can do what we do best, which is serving the customer." — Jeremy Gosch, Hy-Vee president and chief retail officer (Photo courtesy of Hy-Vee)

Along with inflation estimated at 11% in the U.S. food sector, the grocery industry is grappling with a “severe” shortage of retail workers, pressure from labor costs, supply chain disruptions, the impact of pharmacy DIR fees and changes in consumer habits, Hy-Vee noted in its advertorial.

“Many consumer trend reports are noting that more than 70% of consumers are spending less due to recent inflation. They are cutting back on indulgence items and impulse buys, both of which were on the rise during the pandemic but are now coming to an abrupt halt,” Donna Tweeten, executive vice president and chief merchandising officer and chief of staff at Hy-Vee, stated in the advertorial.

As shoppers adjust to difficult economic conditions, Tweeten noted that Hy-Vee is looking to bring added savings via deeper discounts in daily deals on the company’s website and social media pages. “The majority of consumers are now being forced to focus on necessities and make their dollars stretch, just so they can afford the most basic of staple items, whether that be milk, butter and grains, as well as proteins like eggs, poultry, pork and beef,” she explained. “We need to do everything in our power to keep prices down and provide the very best value, especially when it comes to the rising costs on those most basic essentials.”

“As prices rise across the country, our top priority has to be centered on fighting to get the best deals possible for our customers,” Jeremy Gosch, president and chief retail officer at Hy-Vee, said in the advertorial. “In order to do that, we must find other ways to cut expenses so we can do what we do best, which is serving the customer.”