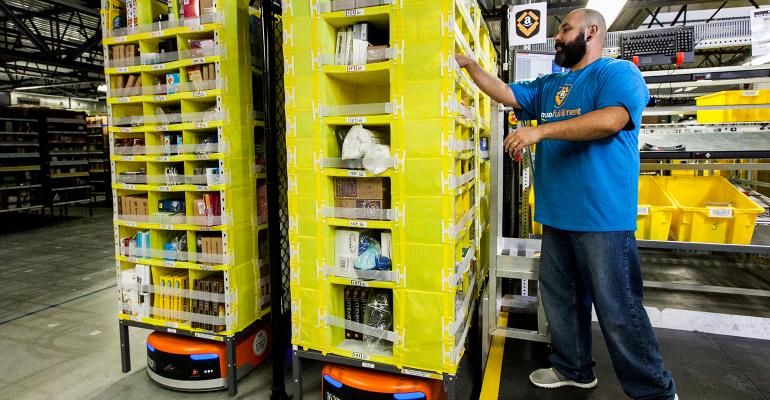 If Amazon is to conquer Walmart, it better conquer profits too Officials of Wal-Mart Stores are fond of remarking that they’d prefer to build an e-commerce business onto a 4,000-store retail platform than to have to do it the other way around. After all, it took Walmart about 50 years to build that many: About half that time was devoted to building a food business within them, and it’s a matter of some debate whether they’ve got that piece where it ought to be yet.

Not to mention, they did that all profitably.

So in that sense, ringside coverage of the Amazon-Walmart Steel-Cage Match stirred up by a few news stories this week — that Amazon was close to a public opening for its first Amazon Pickup grocery sites, and that it was arranging a summit for CPG manufacturers with an eye toward speeding their transformation toward a direct-to-consumer mindset — is still a bit premature. Including its not-yet-open-to-the-public convenience and pickup stores, Amazon has 3,997 sites to go and as of now, is fighting for roughly 2% of the grocery business currently done online, and by most accounts they haven’t done that profitably.

What Amazon’s moves do signal is that it is looking toward getting its business more like Walmart’s — on the bottom line more so than on the street.

Kurt Jetta, founder of Tabs Research, this week said that Amazon’s appeal to the CPG world was “an admission, of sorts, that it is not making money being a conventional retailer/middle-man in the supply chain.” And while it only makes sense for Amazon to try and reduce its supply chain costs, Jetta said what CPG manufacturers “need to consider is whether there is enough revenue potential … to justify antagonizing their brick-and-mortar customers that account for 98% of their business.”

Amazon’s dabbling in physical grocery stores — the “cashierless” Amazon Go convenience store and the Pickup points beta testing in Seattle — clearly acknowledge that Amazon, just like everybody else, requires labor from the consumer to make online fulfillment to the home economically feasible.

Cooper Smith, head of Amazon research at L2 Inc., a firm that benchmarks digital brands, said this week that Amazon could eventually become a “top five” U.S. grocer, citing an advantage of pre-engaged consumers that already have great trust in its brand. It’s worth noting that both its beta-testing physical formats restrict shopping to Prime loyalty members, who will likely see grocery as another “free” benefit to add to their book-buying, TV streaming and shipping-discounts they already pay for.

“Click & collect is nothing new, but the advantage Amazon has over competitors such as Walmart and Kroger is its mobile reach; more than 30 million shoppers use Amazon's mobile app every month — far more than any other legacy retailer,” Smith said. “The scale of Amazon's installed base on mobile devices makes its click & collect fulfillment feature extremely compelling in a competitive market.”

Finally there’s the notion that Amazon’s nascent grocery stores could find profits not by selling stuff necessarily, but by selling technology.

“Though it's entirely speculative at this point, it's also worth contemplating the possibility that Amazon ultimately leases or licenses some of its automation technology to other retailers,” said Keith Anderson, SVP of Profitero’s Strategy and Insights. “Amazon needn't necessarily own and operate a large network of stores to create value from technology like that reflected by Amazon Go.”

“Someone viewed your LinkedIn profile”

I admit it; it was me. Don’t mean to be creepy, just trying to get a rough idea of what’s happening out there.

LinkedIn tells me today there are 891 profiles of Lidl U.S. workers, including a big batch of store managers who have recently completed six-month overseas training and district managers with 18 months of training. Their resumes include about every retailer you’d find in a mall — or at least used to find — and future competitors like Walmart, Kroger, Ahold, Albertsons and Aldi. When you’ve got a storefront on Fifth Avenue — one of the world’s most expensive retail miles — you had better find a way to get attention.

Pictured here is a North Face apparel store that opened late last year and that I frequently pass on the way to and from the office (incidentally at a former site of Loblaw’s “Joe Fresh” cheap-chic clothing concept that quietly vacated the country). The old-school sewing machines, the hand tools and the garment racks support the store’s custom-embroidery business, and putting a working seamstress in front of the staggering amount of passersby tells a powerful story about the trendy handcraftedness and customization that really stands out in glitzy high-end retail.

I always look. Food stores could take a lesson and cook in full view.