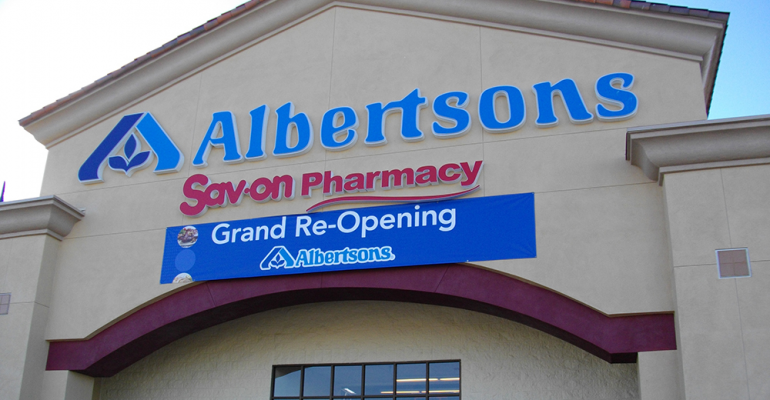 Albertsons
Kimco Realty Corp. has reduced its ownership in Albertsons Cos. from 9.29% to 7.5% with the grocery retailer’s sale of a more than 17% stake in the company to private equity firm Apollo Global Management.
News>Retail & Financial

Kimco stake in Albertsons Cos. shrinks

Kimco Realty Corp. has reduced its ownership in Albertsons Cos. with the grocery retailer’s sale of a more than 17% stake in the company to private equity firm Apollo Global Management.

A Jericho, N.Y.-based shopping center REIT, Kimco said late yesterday that it received $156.1 million as part of Apollo’s $1.75 billion purchase of Albertsons convertible preferred stock, announced in May. With the move, Kimco’s ownership interest in Albertsons decreased to 7.5% from 9.29%.

Albertsons used $1.68 billion in net proceeds from the sale to Apollo to repurchase about 17.5% of the common stock from current shareholders, based on the preferred stock conversion level, Kimco reported. Plans called for the Apollo transaction to be finalized by June 15, pending customary closing conditions.

Before the transaction with Apollo, Kimco was the only other beneficial owner in Albertsons with at least a 5% stake. Albertsons Investor Holdings LLC, an investment group led by private equity firm Cerberus Capital Management (and also including Kimco), previously held more than 90% of the grocery retailer.

Kimco said last month that it would partially monetize its investment in Albertsons in connection with the Apollo deal.

“Our shareholders continue to benefit from the company’s Albertsons investment, especially at a time when liquidity remains paramount,” Kimco CEO Conor Flynn said in a statement at the time. “Our Albertsons investment continues to be the hallmark of Kimco’s Plus business, which has a long and successful history of investing in real estate-rich retailers and other companies. With our remaining 7.5% residual ownership interest in Albertsons, this investment will further benefit our shareholders well into the future while strengthening and diversifying Kimco’s balance sheet.”

Kimco has held an interest in Albertsons since 2006, when a Cerberus-led investment group acquired 661 Albertsons supermarkets from Albertsons Inc. Kimco invested about $51 million in that transaction. Then in 2013, the investment group purchased the remaining Albertsons stores — plus the Jewel-Osco, Acme, Shaws and Star Markets supermarket banners — from Supervalu for $3.3 billion, in which Kimco invested another $37 million. At the time, Kimco bought $33.6 million of Supervalu common stock, later selling those share for $74 million. The consortium then acquired Safeway in 2015, with Kimco investing $85.3 million. Kimco said it received more than $300 million in cash distributions from those investments in Albertsons, including proceeds from the Supervalu stock sale.

Boise, Idaho-based Albertsons unveiled the agreement with Apollo just over two months after filing for an initial public offering. The IPO filing with the Securities and Exchange Commission came not long after news reports said the supermarket giant was looking to go public.