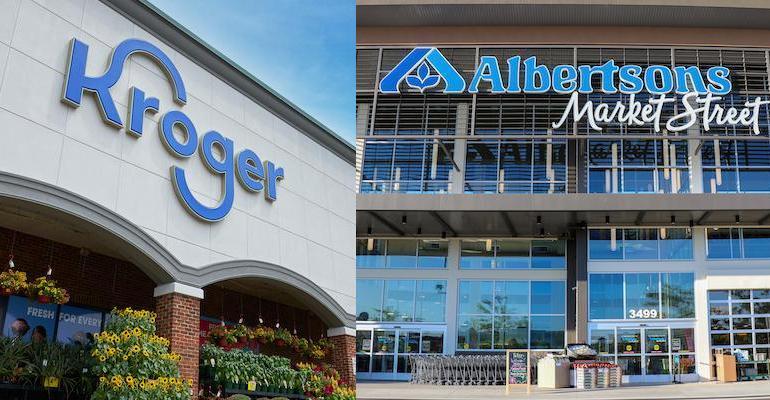 Kroger/Albertsons
Attorneys general from the District of Columbia, Arizona, California, Idaho, Illinois and Washington state sent a letter to the CEOs of Albertsons and Kroger asking them to pause the special dividend payment to Albertsons shareholders as part of their merger agreement.
News>Retail & Financial

The attorneys general of the District of Columbia and five states today sent a letter to Albertsons Cos. and The Kroger Co. urging them to hold off on a special $4 billion dividend payment to Albertsons shareholders under their proposed $24.6 billion merger deal.

D.C. Attorney General Karl Racine (D.), who’s leading the state AG group, said Wednesday that the bipartisan request was made to enable states to complete antitrust reviews of the Kroger-Albertsons merger, announced Oct. 14. He noted that his office also plans a formal investigation of the planned transaction and its impact on workers and shoppers, as well as whether the dividend would impinge on Albertsons’ ability to compete during the merger review process.

Under the merger agreement, Kroger is slated to acquire Albertsons for an estimated total consideration of $34.10 per share, including the assumption of $4.7 billion of Albertsons’ debt. The deal also calls for Albertsons to pay a special cash dividend of up to $4 billion, or about $6.85 per share, to stockholders on Nov. 7. That payment would reduce the merger transaction’s per-share consideration to approximately $27.25.

“Healthy and strong competition is an American value that Republicans and Democrats can unite around,” Racine said in a statement. “Anticompetitive mergers have real impacts on everyday people. We’re deeply concerned about the level of concentration in essential industries, such as grocery stores. And we’re asking Albertsons to not proceed with the payout while we thoroughly assess whether this merger is anti-competitive, anti-consumer or anti-worker. While we trust that Albertsons will adhere to our request, we are actively exploring other options to achieve our objectives, including litigation.”

(Video above courtesy of CNBC)

In the letter, the AGs said the special dividend carries significant competitive implications. Albertsons’ approximately $4 billion planned dividend represents roughly a third of the Boise, Idaho-based company’s market capitalization of $11.19 billion and compares with the total of cash and cash equivalents ($3.392 billion) and net receivables ($652 million) that the grocer reported in its most recent quarter, they explained.

“Even if Albertsons plans to adhere to the legal requirement — and the merger agreement’s commitment — that it continue to compete with Kroger during the pendency of the merger’s review, paying a dividend of this size will hamper its ability to meaningfully compete with Kroger,” the AGs wrote in the letter. “Moreover, regulatory approval of the merger is far from assured. The states must undertake their review and assure themselves that competition in all relevant antitrust markets at issue is preserved. Should any regulatory challenge to the merger succeed, or should the parties abandon the transaction, Albertsons would have to continue to compete with other grocery stores, a goal that its decision to enrich its shareholders to the tune of $4 billion will have made significantly more difficult to accomplish, if not unattainable altogether.”

Kroger’s and Albertsons’ boards already have approved the merger agreement. The deal will join the first- and second-largest U.S. supermarket retailers, creating a national company with 4,996 stores, 66 distribution centers, 52 manufacturing plants, 2,015 fuel centers and more than 710,000 associates across 48 states and the District of Columbia. The merged entity also would be the fifth-largest retail pharmacy operator, with 3,972 pharmacy locations.

Combined, Kroger and Albertsons generated about $210 billion in revenue, $3.3 billion in net earnings and $11.6 billion of adjusted EBITDA in fiscal-year 2021. The companies said they expect the transaction to close in early 2024, pending regulatory approval and other customary closing conditions, including clearance under the Hart-Scott-Rodino Antitrust Improvements Act.

For Albertsons, the merger deal culminates a “review of potential strategic alternatives" that the company’s board of directors initiated about eight months ago. The effort reflected Albertsons’ concern, in large part, that its business was being undervalued versus those of competitors. 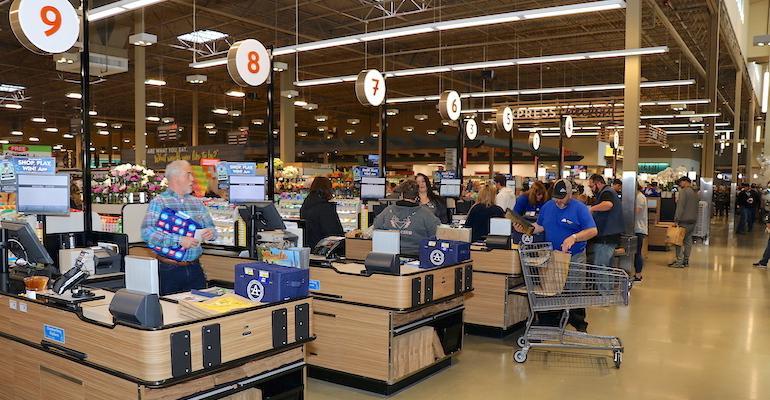 Albertsons said its combination with Kroger will bring 'significant benefits to consumers, associates and communities and offers a compelling alternative to larger and non-union competitors.'

Albertsons, previously owned by an investment group led by private-equity firm Cerberus Capital Management, went public in June 2020 following an initial public offering. Cerberus still holds an approximately 29% stake in the grocer retailer. Wall Street analysts noted that the timing of the Kroger merger announcement was important, since the IPO lockup agreement that Albertsons had with its sponsors expired the week after the acquisition deal was unveiled.

“Our planned combination with Kroger will provide significant benefits to consumers, associates and communities and offers a compelling alternative to larger and non-union competitors,” an Albertsons Cos. spokesperson said in a statement. “The merger announcement and special dividend mark the successful outcome of the strategic review we launched in February, which considered a wide range of options to build on our success and deliver enhanced value for all our stakeholders. The special dividend allows us to return cash to all of Albertsons Cos. shareholders. Following the dividend payment, Albertsons Cos. will continue to be well-capitalized, with a low debt profile and strong free-cash flow. Given our financial strength and positive business outlook, we are confident that we will maintain our strong financial position as we work toward the closing of the merger.”

Labor unions have singled out the $4 billion special dividend as well, among other issues about the Kroger-Albertsons combination. Along with competitive concerns, they contend that the huge payment could put undue strain on Albertsons and the money should go toward investing in the company, its workforce and customers instead of to investors.

“In part of the proposed merger announced by Kroger and Albertsons less than two weeks ago, the companies buried that Albertsons is planning a $4 billion payout to shareholders. Today, six attorneys general including California and Washington pushed back on Albertsons to protect workers and consumers by demanding the companies stop the issuance of the special dividend until regulatory review of the merger is complete," United Food and Commercial Workers Locals 5, 7, 324, 367, 770 and 3000 and Teamsters Local 38 said in a joint statement. “We expect the CEOs to respond positively to the attorneys general by the end of the day on Friday and stop the issuance of the special dividend. Any effort to rush this payment threatens thousands of jobs of essential grocery store workers and millions of shoppers who would suffer from reduced competition, reduced choice and increased costs in markets across the United States."

Los Angeles-based UFCW 770 said it’s looking to regulators and elected officials to pressure Albertsons to forgo the $4 billion dividend and focus its resources on workers and lower grocery prices.

“Taking billions in assets out of a company that is running well, employs hundreds of thousands of essential workers and provides daily necessities for millions of customers is a bad idea for the workers as well as customers,” stated Kathy Finn, president of UFCW 770. “That $4 billion could be much better spent to lower prices of food for consumers facing unprecedented levels of inflation, pay workers more or invest in safer stores for workers and customers. Our essential grocery store members will do everything we can to stop Albertsons from squeezing workers and customers to the bone to shower executives and shareholders with billions.”

In November, the U.S. Senate Judiciary Subcommittee on Competition Policy, Antitrust and Consumer Rights plans to hold a hearing to examine the Kroger-Albertsons merger deal. The lawmakers noted that a potential combination of the nation’s two largest supermarket chains raises an array of issues for both the grocery industry and its shoppers. Senate leaders, too, have called on the Federal Trade Commission to investigate the Kroger-Albertsons transaction, citing particular concern over the deal’s ramifications for consumers. In a letter to FTC Chair Lina Khan, they said the mega-merger comes at a time when Americans already are grappling with high food pricing.