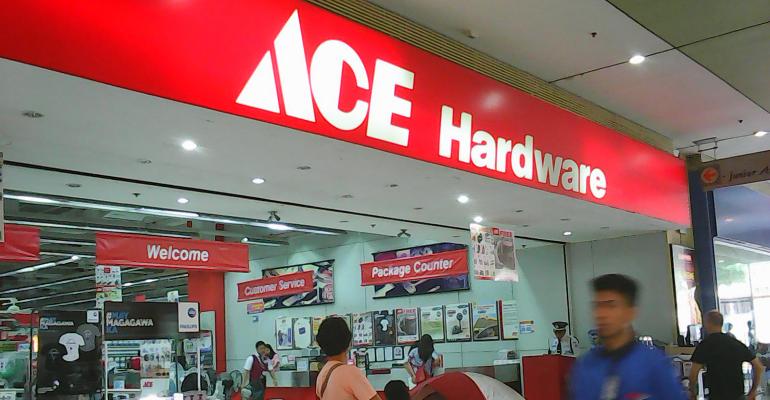 Hardware co-op has been expanding its in-store grocery presence

Kroger Co. and Ace Hardware have been in preliminary talks to open Ace Hardware locations inside Kroger stores, according to a report on TheStreet.com.

The report notes that Ace Hardware, whose retail outlets are independently owned and operated, has been seeking to expand its partnerships with other retailers. It debuted a 5,000-square-foot “Express” format in 2012 to operate in smaller markets and inside existing retail locations. Since that time, it has offered operators $150,000 to open store-within-a-store locations in retailers such a supermarkets and paint stores, TheStreet.com reported.

A spokeswoman for Cincinnati-based Kroger said the company generally does not comment on rumor or speculation. A spokesperson for Ace Hardware, based in Oak Brook, Ill., could not be reached for comment.

More than 100 Ace Hardware locations are currently operated by grocery retailers, according to local reports. Many of the Ace Hardware Express locations are inside — or adjacent to — independent grocery stores and small chains, such as Sentry Market in Wisconsin and Thriftway Food Stores in Washington.

Houchens Food Group, a multi-banner operator based in Bowling Green, Ky., began operating Ace locations in 2015 inside several of its formats.

“From a product standpoint, Ace Hardware is a natural brand to combine with a grocery store, as it adds to the convenience factor and gives customers more reason to visit,” Jimmy Nichols, chief operating officer of Houchens, said at the time. “We believe that Ace has a superior offering and has created a program specifically compatible with our mission to offer store-within-a-store convenience for our customers.”

Ace Hardware also has a relationship with paint retailer Benjamin Moore to operate Ace Hardware stores inside its retail locations.

Ace, which claims to be the world’s largest retailer-owned hardware cooperative, in November reported third-quarter revenues of $1.34 billion, up 9.1% over year-ago levels. Same-store sales grew 7.1%. Net income rose by $3.6 million, to $53.8 million.

The strong hurricane season contributed 18% of revenue growth in the quarter, the company said.

In 2016 Ace Hardware expanded its Ace Rewards loyalty program to become available through its grocery partners’ POS systems, via an agreement with ProLogic Retail Services, a provider of loyalty marketing solutions to independent retailers.

“Retail grocery has become an important channel for Ace Hardware,” ProLogic said in a statement at the time.

Last June, consultant Brittain Ladd posted a lengthy column on LinkedIn in which he suggested that Kroger partner with nonfood retailers, including Ace Hardware, to expand the supermarket retailer’s offerings beyond grocery in an effort to counter Amazon’s acquisition of Whole Foods.

“Kroger must expand their focus on general merchandise in stores and online,” Ladd wrote. “Instead of trying to create their own platform and assortment, Kroger should acquire Overstock.com and leverage their platform to meet the needs of Kroger customers and also expand into cross-border and international commerce through Overstock’s ‘Worldstock’ marketplace.”

Among Ladd’s other suggestions for Kroger to compete with Amazon were partnering with Cracker Barrel to open in-store restaurants and acquiring GrubHub to create a delivery network for groceries and prepared foods.

Meanwhile, Kroger confirmed to SN that it was expanding its Scan, Bag, Go service to 400 locations in 2018, as the company previously said at its 2017 Analyst Day in October. The service allows customers to scan items as they shop using handheld scanners or the Scan, Bag, Go mobile app, then pay at a self-checkout lane. Customers will also soon be able to pay for their orders using the app as well, the company said.