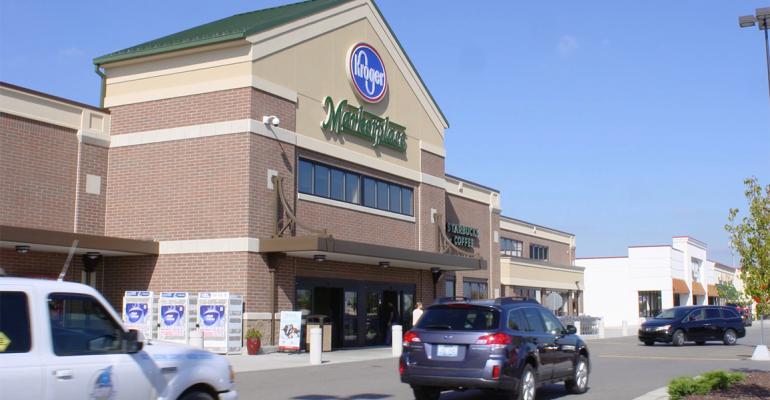 Kroger Co. on Friday said comparable-store sales have returned to positive territory but scrapped its long-term profit forecast citing a “dynamic market” requiring it to step up investments in pricing and technology.

Kroger in 2012 set long-term earnings-per-share growth targets of 8% to 11%, but that forecast had come under question in recent quarters amid heightening competition from Walmart and Amazon and the expansion of hard discounters like Aldi and Lidl. CEO Rodney McMullen on Friday said Kroger would continue to give annual earnings guidance but would suspend the long-term forecast to “provide needed flexibility in how we invest to position us for future success.”

Investors were evidently unhappy, as Kroger stock was down by more than 9% Friday afternoon and trading at a 52-week low.

Kroger in the meantime acknowledged it would devote “more focus and urgency” behind initiatives to transform the company.

“We are reprioritizing and accelerating investments in our Customer 1st Strategy in order to anticipate and meet rapidly evolving consumer demands to shop with us for anything, anytime, anywhere,” McMullen said in a conference call. “Our transformation is all about redefining the customer experience.”

McMullen said the company would explain the changes in further detail in an investor conference next month but revealed Friday that it was investing in a store-wide space optimization initiative with eyes on sales and profit growth the company would also continue to make investments in price.

The space optimization initiative utilizes data from Kroger’s 8451 group that, in many cases, will add space for fresh items to stores, and also review assortments and categories elsewhere. “In terms of the products that we offer to the customer, every single item has to earn its right to be on the shelf and categories have to earn the right to have a certain amount of allocations,” McMullen said.

Kroger expects higher expenses for new equipment and labor and some disruption in stores where space allocation changes are taking place.

Mike Schlotman, Kroger’s CFO, added the initiatives come as the company turns its capital allocation strategy “upside down” as it seeks to prioritize sales-building and technology initiatives and also pursuing cost-saving opportunities.

“One thing I want to be very clear on is that we are not talking about a new strategy to replace Customer 1st,” Schlotman said. “We are talking about better executing the elements of our plan to deliver on all four keys [people, products, experience and pricing] for our customers.”

For the second quarter, which ended Aug. 12, Kroger said sales improved 3.9% to $27.6 billion, and identical-store sales, excluding fuel, increased by 0.7% — the first positive quarter since the third quarter of last year. Gross margin as a percent of sales was 21.7%, down 30 basis points. Net earnings decreased by 8.3% to $353 million.

Kroger said digital sales led by its ClickList click-and-collect offering increased by 126% during the quarter but officials declined to specify total digital sales. Clicklist has expanded to 813 locations with plans for 1,000 by year-end, but has been a drain on store profitability, McMullen acknowledged.

“There's no doubt that ClickList is a headwind on earnings currently and we've even continued to accelerate the speed in which we put ClickList in, so it's an incremental headwind,” he said. “We feel very comfortable when you look at it over a three- to five-year period of time. Our customers will appreciate that we offer ClickList. Our associates, obviously, in terms of being able to provide the service, will be glad and our shareholders will be glad.”

“We will build on this momentum to be the premier private label destination in America,” McMullen said.