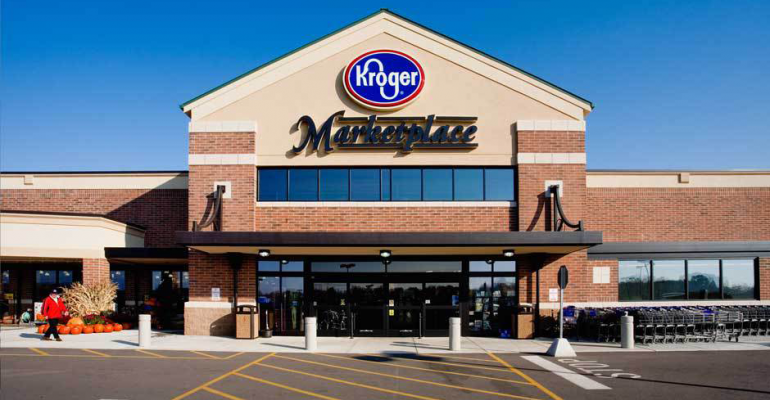 CEO McMullen says company is ‘assembling a platform to deliver anything, anytime, anywhere’

Despite a sales decrease from the sale of its convenience store unit, The Kroger Co. reported earnings in line with Wall Street’s forecast for its fiscal 2019 first quarter.

Kroger said Thursday that sales for the quarter ended May 25 totaled $37.25 billion, down 1.2% from $37.72 billion a year earlier. The company attributed the dip to the $2.15 billion sale of its convenience store unit to EG Group in April 2018. The business included 762 stores and generated $4 billion in sales.

Excluding fuel and the effect of selling the convenience store unit, sales were up 2% year over year for the first quarter, according to Kroger. The Cincinnati-based grocery retailer noted that its own-brand sales rose 3.3%, with double-digit growth in Simple Truth natural and organic brand. Overall, the company launched 219 new private label items in the quarter.

Identical-store sales edged up 1.5% excluding fuel, compared with a 1.9% gain in the prior-year period.

Adjusted net earnings were $586 million, or 72 cents per diluted share, compared with $626 million, or 73 cents per diluted share, in the year-ago period. Kroger said adjusted earnings exclude the impact from the sale of its convenience store, Turkey Hill and You Technology businesses; pension plan agreements; a mark-to-market gain on Ocado securities; and other items.

Analysts, on average, had projected adjusted earnings per share of 72 cents, with estimates ranging from a low of 60 cents to a high of 84 cents, according to Refinitiv/Thomson Reuters.

“We are building momentum in the second year of Restock Kroger, which is off to a solid start,” Kroger Chairman and CEO Rodney McMullen said in a statement, referring to the company’s three-year strategic plan. “The entire company is focused on redefining the grocery customer experience, improved upon by exciting partnerships that will create value. We are on track to generate the free cash flow and incremental adjusted FIFO operating profit that we committed to in 2019 as part of Restock Kroger. We are confident in our ability to deliver on our plans for the year and our long-term vision to serve America through food inspiration and uplift.”

McMullen added that, as part of Restock Kroger, the company is “assembling a platform to deliver anything, anytime, anywhere.” To that end, Kroger expanded online grocery delivery to 2,126 locations and pickup to 1,685 locations as of the close of the first quarter, covering over 93% of the households in its market area.

Also during the first quarter, in Monroe, Ohio, Kroger and online grocery partner Ocado broke ground on the first of 20 automated warehouses they plan to open over the next two years. That facility and another in Groveland, Fla., are slated to become operational in 2021. A third customer fulfillment center (CFC) is planned for the Mid-Atlantic region. The companies plan to replicate the CFC model across the United States to fulfill online orders from customers.

Analysts’ consensus estimate is for full-year adjusted EPS of $2.19, with projections running from a low of $1.95 to a high of $2.25, according to Refinitiv/Thomson Reuters.