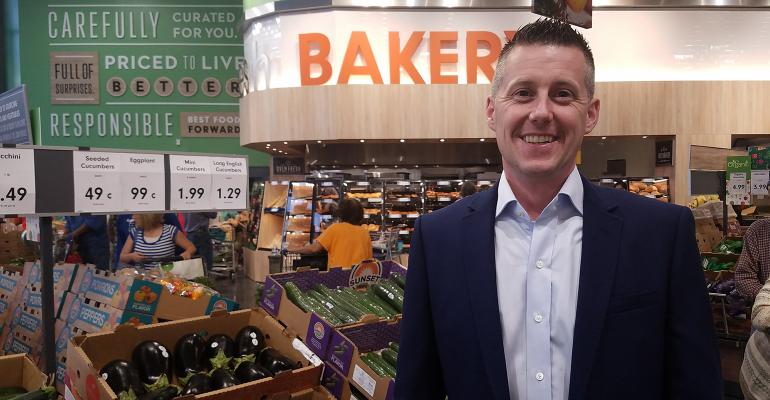 “We will beat the best prices in the market,” CEO says

Hundreds of shoppers were waiting in a line that circled the parking lot early Thursday morning in Virginia Beach, Va., when Lidl US opened the doors and let them in.

As they filled their carts with 89-cent pineapples, 83-cent eggs and $19.99 kettle grills they may also have been witness to a small revolution in U.S. food retailing.

Lidl, which in addition to the Virginia Beach store on Thursday opened in nine other U.S. cities on the Mid-Atlantic coast for the first time, and has announced plans to open at least 100 stores in the next 12 months, debuted a bright, large hard-discount store that is arguably the first such model designed for the modern American shopper, and its influence is likely to be felt across the food retailing landscape, bringing new pressure to an industry already struggling with overcapacity, slackening consumer demand, food price deflation and a shopper base that expects quality, convenience and sharp pricing. Anticipation of Lidl’s arrival was a factor in any number of transformative events in the industry over the past few years, from Walmart’s price and service initiatives, to the Ahold Delhaize merger, to the announcement of $5 billion in renovations and new store announcements made recently by its German counterpart, Aldi. Brendan Proctor, CEO of Lidl US, in an interview at the Virginia Beach store Thursday morning framed the opening as the start of a challenge for Lidl as well.

“It’s not about whether our model works in a market, it’s about what we have to do to adapt to the market. Today is the day we start that work,” he said. “We will study the shoppers coming through today, and the products they are purchasing, and the volumes in which they are purchasing them and those will be the first learnings for us, as to what customers see as our strengths, and on that we’ll start to work.”

Lidl’s U.S. stores, however, already reflect considerable forethought to how to serve the U.S. customer in a way that’s markedly different than its units in Europe, and how discount stores tend to operate in the U.S. For one thing at 36,000 square feet — 21,000 of which is floor selling space — its U.S. stores are 35% larger than its biggest units in Europe, Proctor said. Their distinct appearance, made of red brick with arching walls of floor-to-ceiling glazed glass, reflect learnings from focus groups who told Lidl executives its European stores with exterior aluminum panels more closely resembled a car dealership than a supermarket. Coin-released shopping carts, a staple of Lidl’s Europe stores — not to mention that of Aldi in the U.S. — are nowhere to be found.

Inside, product selections have also been tailored to American tastes. For example, they include a line of refrigerated craft-style beers that are typically not offered in European stores. Private label packaging has been designed specifically for the U.S. market, in many cases to leave customers with little doubt as to the national-brand counterparts they should mentally compare them to. Proctor declined to disclose how many SKUs the store carried, saying that figure would be subject to change as Lidl studied the sales results of its first units. The crowd observed at the store early Thursday included several shoppers who also appeared to be studying — representatives of other retailers or brokers, photographing shelf tags and carrying clipboards, one of whom remarked that prices were difficult to compare on certain fresh produce items because of unique pack sizes available at Lidl. “I’ve seen a few shopping carts going out that look like they are product analysis baskets,” Proctor remarked.

This was just one indication of market anxiety over the potential effect of a new competitor in the market. An analysis of Lidl’s debut sales flier vs. fliers of competitor stores published Thursday by RBC analyst Bill Kirk indicated Lidl’s promotional prices were between 12% and 30% lower than competitor’s published promotions, although quite similar to the pricing at Aldi stores. On common items found in both fliers, Lidl was 20% cheaper than Kroger (on seven common items); 27% lower than Sprouts Farmers Market (six common items); and 30% lower than Publix (seven items). Lidl had four common promotional items with Food Lion (with Lidl 22% lower) and three common items with Save-A-Lot (with Lidl 13% lower).

“We will beat the best prices in the market,” Proctor declared. “That is where we stand. In order to do that we look at the whole market in order to determine where our prices ought to be. We want to be sure that every time our customer comes in they don’t need to be concerned that they’re not getting the best values.”

Lidl is also using promotional pricing to drive shopper frequency in ways that U.S. competitors often don’t, from a rotation of while-they-last specials on nonfood items (the kettle grill, for example) merchandised under large signs reading SURPRISES to the “Fresh 5” promotions (three fresh vegetables and fruits, two meat and seafood promotions) that change twice a week. Customers enter the rectangular store at the corner and encounter a bakery along the near wall where shoppers can reach into bins where a variety of fresh baked items are dropped, opposite fresh produce. This leads to a first aisle where Proctor said shoppers could get 80% of their weekly convenience shopping done including bread, dairy and refrigerated meats. “We believe this layout will make the shopping experience easier for consumers,” he said. “This delivers what customers want —to get into the store, purchase what they need and get to the checkout.”

There are six aisles in the store, each divided twice by paths across, providing space for endcap displays of promotional items, some merchandised alongside their national-brand counterparts or featuring signs picturing those national brands along with comparable prices.

Around 90% of the selections at Lidl are private brands, and so convincing American consumers of their quality appears to be one of Lidl’s top priorities.

One supplier representative in for the opening told SN that Lidl appeared more concerned with quality than some competitors he also sold to, and that the pricing was supported by a more efficient process than other buyers. The supplier, who asked not to be identified, also said faith in the financial strength of Lidl and its owner Schwarz Group made a longer term bet on volume more palatable than most other buyers.

“Our model is quality and price and the only way to deliver that is to have partnerships with suppliers that work for the long term,” Proctor said. “That’s something we’re very proud of. I’ve worked in Ireland and in Austria and the relationships with have with suppliers there are long-term, sustainable relationships where we can learn from one another, and suppliers can learn from us the efficiencies we’ve learned in other markets. Together we can invest for the long term because ultimately that’s the only way we can succeed over the long term. We are fortunate to have had suppliers who have lifted us, and invested along with us in our model.”

The Virginia Beach store in preparation prior to Thursday's grand opening.