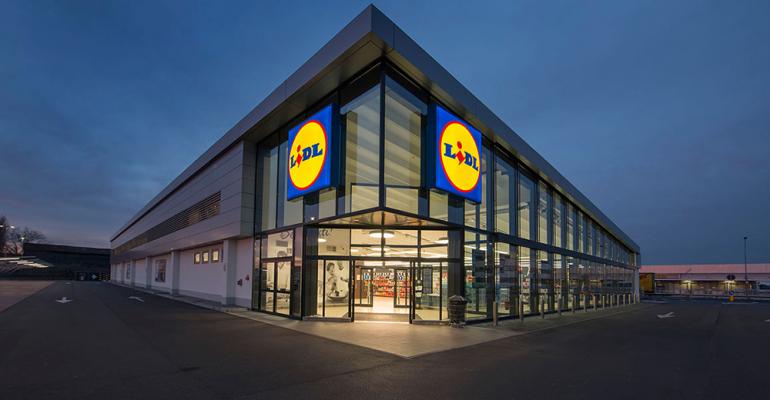 The German retailer has faced its own challenges, but is predicted to “sweat it out” in the U.S. market

Lidl’s impact on U.S. supermarket chains has had been stronger than even Walmart’s in terms of price cutting, a new study by the University of North Carolina Kenan-Flager Business School finds.

“It’s fair to say that the grocery industry is in a state of turmoil,” Gielens said during a press call to discuss the study’s findings. And to the surprise of the many in the industry it’s not Amazon, but rather German retailers Lidl and Aldi that are putting pressure on grocery chains, she said. She cited a recent Bloomberg piece on the topic.

The study looked at Aldi, Food Lion, Kroger, Publix and Walmart in six markets where Lidl operates and in six control markets all in Virginia, North Carolina and South Carolina. Researchers found that grocery retailers located near Lidl stores set their prices for staples up to 55% lower compared to markets where Lidl is not present.

The study, which was commissioned by Lidl, was independently led by Katrijn Gielens, associate professor of marketing at UNC Kenan-Flagler. Lidl operates about 10,000 stores in nearly 30 countries. The company is based in Germany, with its U.S. headquarters in Arlington County, Va.

The researchers looked at a broad basket of 48 private label grocery products, including dairy meat, produce, and canned and frozen goods. The study focused on private label products as these are a core part of Lidl’s model, and it’s a model that fits with consumers changing attitudes and behaviors, said Gielens. “Cheap is the new smart. You don’t want to be ripped off just because there’s a brand on something.”

The study found the cheapest overall baskets were found consistently at Lidl. But Lidl had a “significant” impact on prices at competing stores. “The closer the supermarket is to Lidl the lower the prices,” Gielens said. She noted that Lidl’s competitive price cutting is more than three times stronger than when Walmart enters a new market.

Competing retailers set prices for a half gallon of milk about 55% lower in markets where a Lidl was present, according to the study. Price reductions of more than 30% were found in avocados and bread-related products.

Lidl has faced its own challenges after entering the U.S. market in June. The company has recently shifted its focus to leasing rather than owning properties. It’s placed a new location in New Jersey on hold. And according to a report released by inMarket, a firm that analyzes mobile data location, Lidl’s share of customer visits declined after an initial interest in the new retailer.

But Lidl won’t give up on the U.S. market any time soon, predicted Gielens.

“This isn’t a typical predatory cost structure,” she said. “They have these very long-term strategies. They can afford to. They are not driven by quarterly reports and can sweat it out.

“Based on what we’ve seen in other markets, I think they’re here for the long term,” she added.