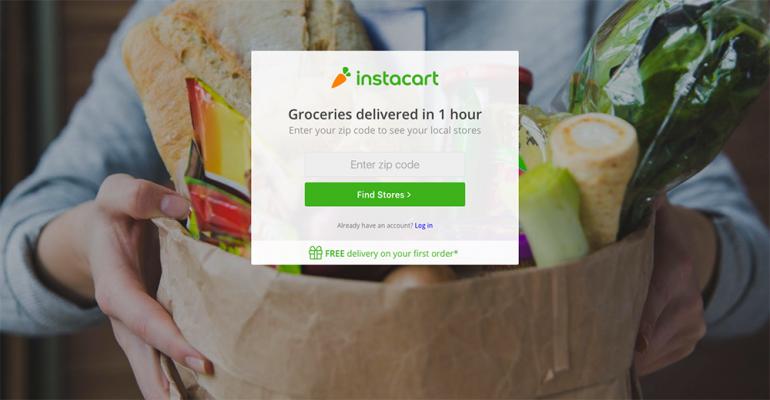 Loblaw Cos. on Wednesday reported third-quarter sales and profit gains amid an ongoing restructuring of the business and several new initiatives.

Among those initiatives, the Brampton, Ontario-based chain said it would be the “anchor” supermarket banner for Instacart as the same-day delivery company expands into Canada. The service is slated to begin Dec. 6 in Toronto, then expand to the Vancouver market in January and additional markets in 2018.

The Instacart service will complement Loblaw’s burgeoning click-and-collect offering, which is now available to about 30% of the Canadian population.

“We believe very strongly in click-and-collect,” said Galen Weston, chairman and CEO, in a conference call with analysts. “It's going very well, but we recognize that a home delivery service is also part of the future, and a partnership allows us to deliver that proposition to the consumer without having to take on the incremental capital investment of building it ourselves.”

Instacart, which operates throughout the U.S., hires independent delivery personnel who pick orders from stores and deliver them to customers. Loblaw will be the “anchor grocer” on the Instacart site when it expands to Canada, and the chain will also have a mechanism on its own website to direct shoppers to Instacart for delivery service.

Weston said Instacart also has relationships with other food retailers that cover all of North America, but it was the agreement with Loblaw that led Instacart to actually begin operating in Canada.

Weston also elaborated on a move announced last week in which its Loblaw supermarket and Shoppers Drug Mart drugstore divisions will merge their loyalty programs, effective Feb. 1. The program will blend two of the most popular loyalty programs in Canada — the PC Plus program from Loblaw and the Optimum program from Shoppers — into a new loyalty offering called PC Optimum.

The combined programs will give Loblaw more visibility into the purchasing habits of its shoppers across the entire network of stores and give the chain more “analytical horsepower” for promotional and assortment decisions, Weston said. Merging the two platforms will also reduce costs and has the potential to drive incremental sales from customers seeking to amass points on the combined system, he said.

Loblaw also said it would close 22 unprofitable store locations across several of its banners by the end of the first quarter of next year. It had previously announced plans to eliminate 500 corporate and store-support positions at the company, which the company said had been completed by the end of the third quarter.

The moves come as Loblaw braces for what it expects to be “significant headwinds” in 2018, including an increase in the minimum wage and healthcare reform, which the company said could have a big impact on its pharmacy business.

Loblaw reported same-store sales gains in its food retail business of 1.4% for the third quarter, excluding gasoline. Food retail sales received a boost from a return to inflation, the company said. The Canadian Consumer Price Index rose 0.3% in the quarter, and Loblaw’s internal inflation was “marginally higher,” Loblaw officials said during the call.

Same-store sales at Shoppers Drug Mart rose 3.3%, including 3.9% in the pharmacy business and 2.8% in front-of-store categories.

“We were pleased with our results in food retail, which delivered tonnage, share, traffic and basket gains,” said Weston.

The company recorded several one-time events in the quarter, including the sale of its gasoline operations, which were not included in the adjusted net income results, and the consolidation of its franchisees under a new accounting system. As of the end of the third quarter, 273 of Loblaw’s 500-plus franchised locations had been converted to the new reporting scheme.

Loblaw also said it would not comment on an industry-wide investigation by the Canadian Competition Bureau about a price-fixing scheme involving certain packaged bread products.

“The company is cooperating fully,” said Roy MacDonald, VP of investor relations. “Court filings made by the Competition Bureau remains sealed, while searches are completed.”

Loblaw had confirmed the investigation on Oct. 31.