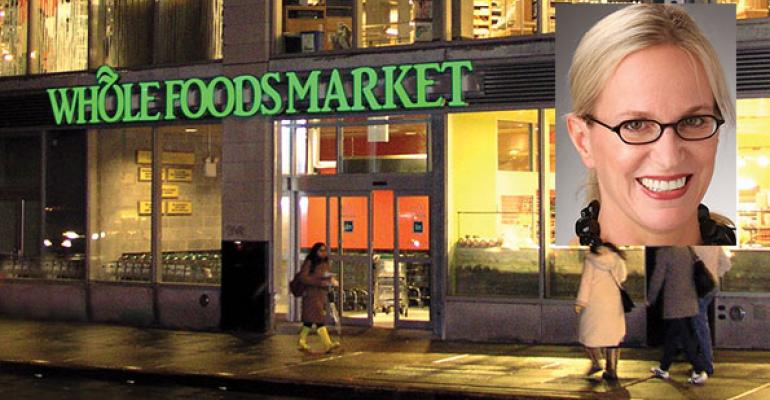 Whole Foods Market needs to lower prices to achieve sales and earnings growth — an undertaking that may require pressure from an outside activist or a leveraged buyout — a Wall Street analyst suggested in an extensive report.

In a report published Tuesday, Karen Short, a research analyst with Deutsche Bank, New York, said the case for owning Whole Foods stock “is predicated on the involvement of an outsider that can exact change,” with a potential buyout price of $35 per share.

“An LBO works if prices are cut so that Whole Foods emerges as a compelling growth story with a more sustainable margin structure,” she noted.

However, Millennials appear willing to accept Whole Foods’ higher pricing, Short said in her report, noting that 65% of participants in a focus group of Millennials viewed the company’s prices as “justifiably higher because of the quality difference” while 35% viewed prices as “unreasonably high.”

“By all accounts Millennials are tough to impress and are a price-sensitive crowd, so the positive view of Whole Foods’ quality is a strong indicator that the Whole Foods trusted brand is still very valuable,” Short said.

To create shareholder value for the Austin, Texas-based chain, Short suggested Whole Foods needs to focus aggressively on cost-cutting and use the savings to “invest meaningfully” in price; cut capital spending “until pricing is addressed” to generate a re-acceleration of comps; reduce the size of future units; abandon the 365 format, “or at least test it extensively before rolling it out”; and return cash to shareholders once fundamentals have been stabilized.

“Together these actions should create a stronger Whole Foods — a compelling growth story with a more sustainable margin structure,” Short said. “It is also significantly easier for a private company to invest meaningfully in price than it is for a public company.”

Short pointed out several negatives to the chain’s current outlook:

• Merchandise margins that are significantly higher than its peers, “which presents earnings-per-share risk if [Whole Foods] meaningfully addresses its pricing positioning without finding offsetting savings.”

Noting that the merchandise mix at Whole Foods includes more perishables and prepared foods than some competitors, Short said its margins are running at 38.5%, compared with 36.7% at The Fresh Market, 32.3% at Sprouts Farmers Market and 24.5% at Kroger. “If Whole Foods reduced merchandise margins by 400 basis points — to the 34.5% range — there would most likely be a resulting volume lift and savings opportunities that should offset at least some of the investment,” she pointed out.

• Weak traffic trends, which are unlikely to be reversed until pricing is addressed.

• The possibility that comparable sales could turn negative unless positive trends accelerate “meaningfully.”

• The danger that previous strategies may not work now that Whole Foods “is no longer a big fish in a small pond [but] a small fish in a very big and very competitive pond.”

The market for natural and organic foods has increased dramatically in the last few years, Short noted, with companies like Kroger and Costco becoming “truly large disruptors [who] have a significant lead on data analytics and technology — making differentiation more difficult to achieve and putting much greater emphasis on sharper pricing, which is not Whole Foods’ core strength.”

• The lack of clarity on what Whole Foods’ "Plan B" is now that it has executed on all its mid-2014 momentum-building initiatives — adding and refreshing stores, narrowing the price gap on perishables, launching a national brand campaign and expanding digital programs — and comps have still decelerated, “mostly because price was not addressed meaningfully.”

• The commitment to open legacy stores of 40,000 to 50,000 square feet, plus 30,000-square-foot 365-format stores that will emphasize value, quality and convenience, which could drive down overall returns on capital invested, Short said.

“The new format adds complexity to the business and could become an outsized drain on management’s time,” she explained, “and cannibalization could be an issue, particularly if the new format pulls existing shoppers looking for more value.”

During SN’s roundtable, other analysts expressed concerns about Whole Foods similar to Short’s. “Until it get prices right, it’s downhill,” Scott Mushkin, managing director for Wolfe Research, New York, said. “The company is having trouble competing against other supermarkets. There’s more competition coming all the time, selling the same product at much lower prices, and Whole Foods hasn’t done anything to invest in price, no matter what it says.

“It’s getting pressured from the bottom with supermarkets coming up and then from the top where you’ve got all these [meal-delivery] services, and everybody’s pricing below them.”

According to Andrew Wolf, managing director of BB&T Capital Markets, Boston, Whole Foods “got greedy. It always bought out its competition, [and] it had the field to itself. Now it doesn’t, and it’s being impacted by players like Kroger.

According to Bill Kirk, an analyst with RBC Capital, New York, “If you’re a consumer who’s aware you should eat better and can afford to, you already shop [at Whole Foods]. Where Whole Foods struggles is with people who are aware they should eat better but for whom price is a prohibitive factor, or people who are aware but don’t have the location accessibility. “Whole Foods doesn’t have a shot at those two customer segments with a legacy store. The new concept at least gives it a chance at those demographics, though that’s not to say it’s going to get them.”

Taking Sides: Is Whole Foods on the right track with its new store concept?
Jun 30, 2015