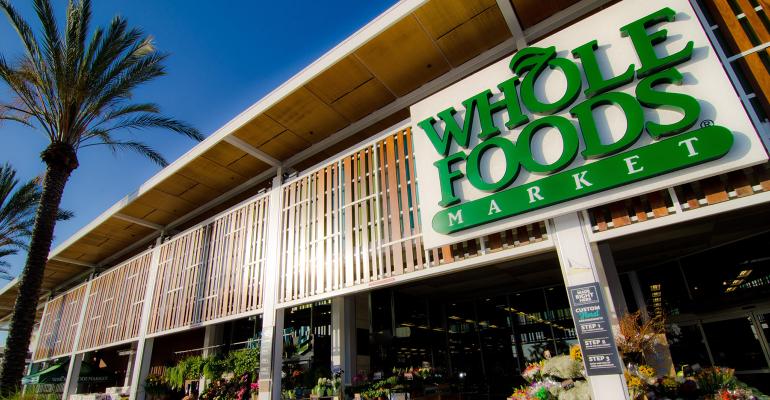 Analysts cite $64B opportunity for ‘grim reaper of staples retail’

While stock market activity – and some industry observers – suggest Whole Foods Market may still find a more attractive acquisition offer than the one it revealed last week from Amazon, it’s going to be difficult to convince Whole Foods CEO John Mackey that there’s a better fit.

In a celebratory town hall address to employees, Mackey described a “whirlwind courtship” that began as a “blind date” between the natural foods giant and the e-commerce pioneer six weeks ago, and resulted in last week’s announced $13.7 billion merger between the companies.

“A little over six weeks after we met on this blind date, we’re … officially engaged,” Mackey said to laughter. “But like an old traditional marriage, where there are all kinds of rules and chaperones, we can’t consummate the marriage, until we’re actually officially hooked up. This is not a Tinder relationship.”

In his address, Mackey emphasized a pairing of innovative companies that would do “amazing things,” while expressing clear relief at the prospect of getting the company he founded 39 years ago out of the immediate crosshairs of Wall Street, and the activist investors that had been agitating for change. Amazon, he said, was a “visionary” company that has “had the courage that almost no other public company has had the courage to -- basically, resist the drumbeat of short-term, quarterly earnings that have had us trapped here for a couple of years as our same-store sales came down.”

Mackey told employees he could not yet share specific details of Amazon’s plans for Whole Foods, but affirmed a commitment to a slate of initiatives he announced last month in an attempt to refire same-store sales and earnings growth. Those plans were seen in part as a response to pressure from activists including Jana Partners and Neuberger Berman, which between them acquired 10% of Whole Foods beaten-down stock. Jana, holder of 8.3% of the company, indicated it would propose a slate of new board members for election at Whole Foods’ 2018 annual meeting.

Whole Foods instead reconfigured its board behind its own nominees, including new chair Gabby Sulzberger (who in the town hall meeting called herself “the mother of the bride”), and pledged nationwide rollout of an affinity plan, category management and $300 million in cost reductions.

These moves, Mackey said, would help Whole Foods return to positive same-store sales and earnings growth by the end of the 2018 calendar year.

Analysts say the prospect of the Amazon-Whole Foods hookup could trigger massive disruption in the U.S. grocery industry by providing the leading e-commerce company with just the opening it needs to crack the grocery market: direct access to hundreds of productive stores and their customers. Despite taking an estimated $6 billion in U.S. consumable sales annually, Amazon has struggled to do so behind fresh food, in part because delivery of perishable goods has proven difficult to execute cost-effectively. The company has experimented with various fulfillment options including Amazon Fresh, same-day delivery of third-party sales through Prime Now, and most recently with tests of a drive-up facility to collect online orders, and a convenience store utilizing technology allowing for a “checkout free” experience.

The deal provides further confirmation that a combination of physical and digital shopping options – as evidenced by the growth of “click-and-collect” initiatives at Wal-Mart Stores and Kroger and by third-party grocery delivery services such as Instacart – is required to compete for shoppers that have increasingly valued convenience.

Analysts estimate e-commerce currently accounts for between 1% and 2% of the $800 billion U.S. food-at-home industry but could one day approach 10%. In more mature e-commerce like the United Kingdom, Internet shopping today accounts for about 5% of industry sales – about 8% in dense cities like London – Barclays analyst Karen Short said this week.

“Let’s say it can reach 10% penetration: That implies an $80 billion opportunity,” Short said in a conference call discussing the deal this week. “If Amazon can get 80% of that, which is very feasible, that’s $64 billion, and assuming 2% margins that’s $1.3 billion in incremental profits.

“Eighty billion out of brick-and-mortar would do some serious damage,” Short added. “The mid-tier regionals might not survive the impending carnage, and that was before this was announced.”

Given the potential for Amazon to open up such an advantage, Short suggested it would not be of the question for Whole Foods to receive a counter-offer. At least some investors  appear to beleive so as well: They have bid Whole Foods stock price beyond the $42-per-share offered by Amazon.

“Armed with the Whole Foods’ brand, and an additional $15 billion in sales, if it wasn’t clear before, it is certainly clear now in our opinion that Amazon intends to take significant market share of the $1 trillion consumables market over the next three to five years. We view this as negative for all staples retailers, but particularly for Kroger, Target, Costco and Sprouts.”

Also addressing Whole Foods’ employees was Jeff Wilke, CEO of worldwide consumer at Amazon, who relayed his personal admiration for Whole Foods’ mission, indicating Mackey’s fierce brand emphasis would likely remain intact under the incoming parent. “They changed the way I thought about food,” Wilke said about Whole Foods. “Changed the way I thought about raising kids and what we would feed them. You [Whole Foods employees] pioneered this. You drove people to think differently about what they ingest, and how they go about their day, which is kind of remarkable.”

Amazon has historically been willing to forsake near-term profits for long-term bets on growth, Wilke added – a philosophy that would seemingly be put to the test should Whole Foods as presumed, pursues becoming more price competitive with its grocery peers.

“The way we think about investing and running the company, Jeff Bezos’ first letter to the shareholders, in 1997, lays out a bunch of principles for how we think about the long-run versus the short-run,” Wilke said. “And in that letter, it says, ‘Given the choice between short-term, quarterly profit and long-term cash flow that we can invest in ways that we think are smart and that customers will love, we’re going to choose the cash flows every time.’ And we’ve been true to that mantra for our entire life as a public company.”

Jay Jacobowitz, founder of Brattleboro, Vt.-based natural products consultant Retail Insights in an interview told SN that he felt moves would amount to “another step towards Jeff Bezos’ goal to take over the world, particularly the top of the market,” and noted the disparate businesses at this point had little obvious strategic synergies. “I think Jeff Bezos basically said to John Mackey, ‘I can solve your problems for you if you want,’ but it’s a fetish. I think he’ll be hands-off until it starts to evolve.”

Mackey said Whole Foods could benefit from Amazon’s technology muscle. “I think that we can expect that we’ll go to the front of the class, eventually, in the grocery business, from, like, the class dunce to… the class valedictorian.”

That won’t be easy, warned Burt P. Flickinger, managing partner of Strategic Resource Group. Flickinger contrated the Amazon deal with the concurrent debut of Lidl in the U.S. and suggested the latter could have an even bigger impact to the grocery industry over the long term.