A gathering of Market Basket employees loyal to Arthur T. Demoulas on Wednesday “declared independence” from the retailer’s new co-CEOs and demanded that the board of directors reinstate the ousted president.

The group consisted of around 75 employees at Demoulas Super Markets’ Tewksbury, Mass., headquarters. One worker in that group, operations supervisor Joe Schmidt, told SN that workers summoned newly named co-CEOs Felicia Thornton and James Gooch to the meeting and informed them they would defy their leadership while performing their tasks as they did under the previous administration. Workers also ordered the new CEOs to tell the board of directors to reinstate Arthur T. Demoulas, who was removed by the board three weeks ago.

Thornton and Gooch did not respond, Schmidt said. “It wasn’t a two-way dialogue,” he said.

Schmidt said workers did not have plans for further collective action such as a work stoppage but said they would have no further communication with management until Demoulas is reinstated.

“It certainly evident over the past few weeks that the current direction of the company is unsound, which is obviously causing great concern” Schmidt said.

Spokespeople for the new management were not immediately available for comment. In a memo to employees sent upon their appointment late last month, Thornton and Gooch asked employees to give them “the opportunity to learn about you and your company experience,” and said they intended to build upon Market Basket’s tradition in customer service. They added that they had no intention of changing the structure of benefit programs, profit sharing and bonuses, which has been one of one of the key concerns of employees: 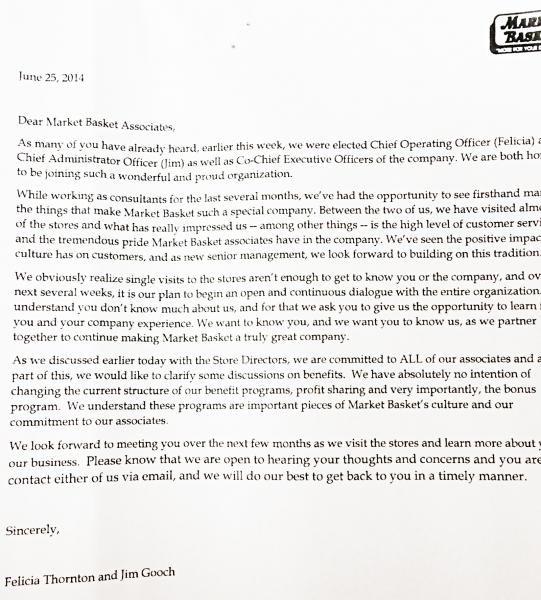 Many of Wedensday’s meeting attendees, which included managers, directors, supervisors, buyers and assistants, are associated with the We Are Market Basket group, which coalesced around concerns that a power shift in the board of directors last year would threaten the reign of Arthur T. Demoulas, his staff and the policies that helped Market Basket grow in recent years. That group released the following statement on social media Wednesday: 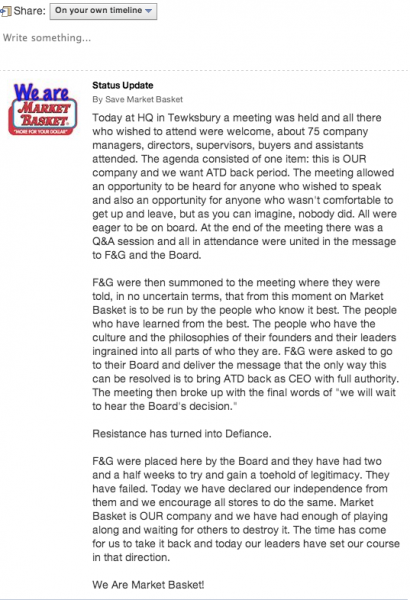 Although the group also urged store employees to take up the fight it’s not clear how many of the company’s 25,000 are as passionate. One user was quick to mention Wednesday:

The Save Market Basket Facebook page does not reflect the overall opinion of the company. Please stop speaking on behalf of all of us