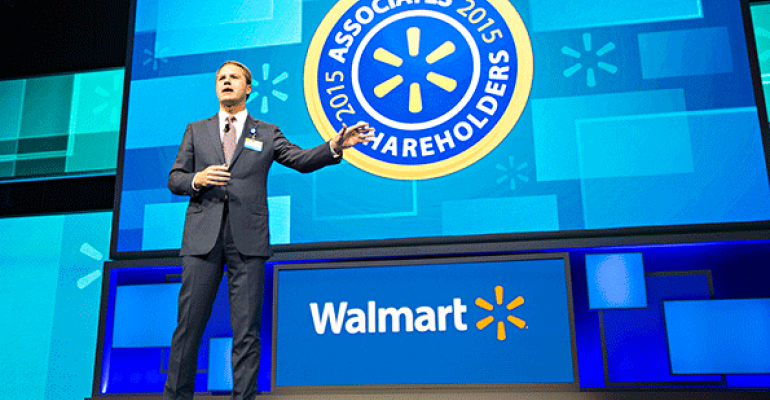 Walmart’s CEO on Friday urged employees to be “obsessed with serving customers” while pledging to act with “urgency and determination” to carry out its mission behind investments in people and technology.

“We’re moving fast to exceed our customers’ expectations, while making purposeful choices that will position us for the long haul,” Doug McMillon told a gathering of some 14,000 employees at Wal-Mart Stores’ annual meeting Friday in Fayetteville, Ark. “This is a turning point in our story, and the investments we’re making today will set the stage for strong and sustainable growth.”

Over the course of three days at the retailer’s annual Shareholders Week events, Walmart highlighted the potential impacts of a $1 billion investment in higher wages, moves to improve the conditions and atmosphere for its workers, and structural and physical changes aimed at getting stores to operate more effectively.

This effort, officials said, will be augmented by concurrent investments in e-commerce with a vision of providing shoppers with the ability to benefit from Walmart’s price and selection while shopping in stores, by mobile phones, or online.

In his address, McMillon said associates were “heroes” while casting internal bureaucracy, complacency and a ”lack of speed or a lack of passion” as villains. “We’re threatened much more by the things we can control than the things we can’t,” he said.

The meeting was the first for a new U.S. leadership team headed by international retailing veteran Greg Foran, appointed by McMillon as U.S. CEO last summer. Foran, along with his new COO, Judith McKenna, in a conference with reporters Thursday outlined a strategy built around friendlier workers and cleaner and better managed stores.

They highlighted effects of a new attention to detail around merchandising and service, pledging stores would be “clean, fast, friendly and in-stock” by the start of the holiday shopping season in October. This would be carried out by workers energized by a recent wage increase and a slate of employee-friendly policy changes ranging from more flexible work schedules to relaxed dress codes, and bolstered by structural changes putting hundreds of department managers back in stores.

Stores themselves are also seeing new investment including new commitments to cleanliness and physical changes that for instance, will improve merchandising capability behind less cluttered stores and in the case of Neighborhood Market stores, more service departments.

While the investments are likely to put Walmart under additional near-term earnings pressure, McMillon highlighted modest U.S. sales momentum in recent quarters and the potential to grow.

“We need to dial up our own personal expectations,” McMillon said. “Striving for excellence means we make things happen. It means we overcome bureaucracy and mediocrity. It means we hold ourselves and each other accountable for action and results. It means we move with speed as a team.”