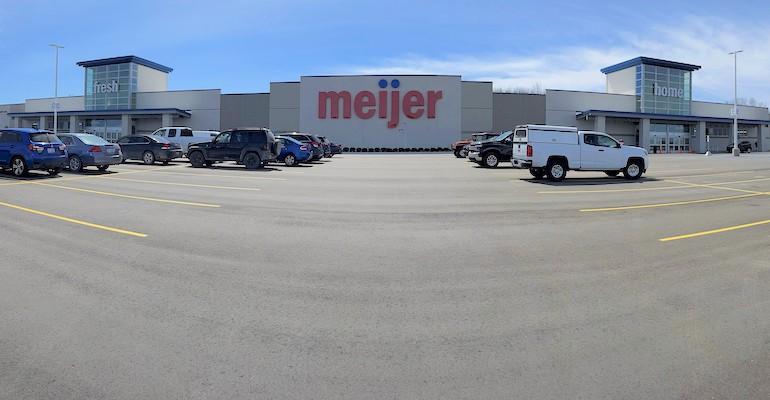 Meijer
The 155,000-square-foot Meijer supercenter in West Branch, Mich., is slated to open for business on May 12.
News>Retail & Financial

New locations in Michigan and Indiana due to open in May

Meijer is following up a pair of supercenter openings in Ohio later this month with another pair next month in Michigan and Indiana.

Plans call for 155,000-square-foot supercenters to open May 12 in West Branch, Mich., and Fort Wayne, Ind. Meijer Express gas stations opened next to both sites on April 14.

Weekly sales at the new stores will begin when their doors open on May 12, and Meijer plans to offer special promotions and events as part of the grand opening events.

Also opening on May 12, the Meijer supercenter on Dupont Road in Fort Wayne, Ind., will be the chain's fourth in the city and 41st store in Indiana.

“Local residents and new customers have been incredibly welcoming every time we open a store in our home state where the supercenter was born,” Jason Beauch, regional vice president at Meijer, said in a statement.

Meijer noted that it has invested heavily in Indiana since opening its first store there in 1994. The new Fort Wayne supercenter on Dupont Road will be Meijer’s fourth in the city and 41st store in Indiana, where the company has nearly 8,000 employees and runs a manufacturing plant in Middlebury.

“Over the last two years, our store teams have helped families meet unprecedented challenges by providing fresh grocery options and supporting their pharmacy needs, so we look forward to opening the doors for our new neighbors,” stated Maureen Mitchell, regional vice president at Meijer.

Last month, Meijer unveiled plans to open two new supercenters in northeastern Ohio. The stores are slated to open their doors in Brunswick and Canton, Ohio, on April 28. Meijer Express fuel stations adjacent to both stores opened on March 31.