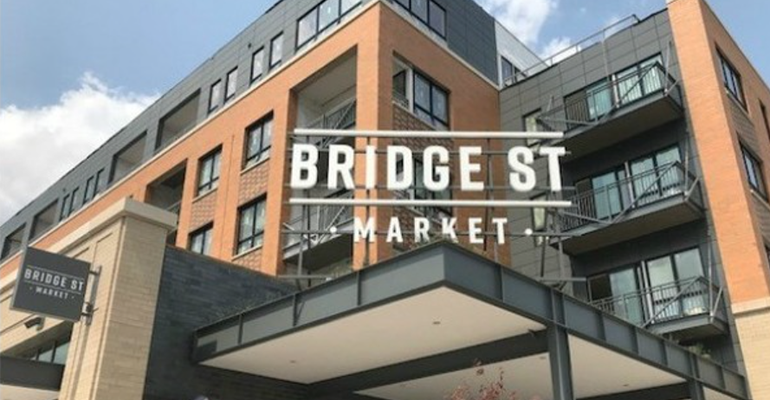 Today, Meijer plans to open a newly designed convenience store and gas station adjacent to its Grand Rapids, Mich., headquarters. The company said the 5,500-square-foot store will be the first Meijer gas station with a separate, full-service Starbucks. In addition, the location will house an expanded assortment of fresh produce and protein-based snacks, wraps, fruit and organic items, along with grab-and-go meals prepared locally by Superior Foods.

Set to open tomorrow is Bridge Street Market, a 37,000-square-foot neighborhood grocery store on the west side of Grand Rapids. Announced last year, the fresh market features an open-air, pedestrian-friendly design and anchors a mixed-use development that spans a city block and includes residential, office and retail space.

The convenience store (above), located at 2988 Walker NW, serves up a wide range of fresh-made food, including sushi prepared daily, hot items such as handcrafted pizzas and chicken tenders, and locally made donuts delivered daily. There’s also a self-serve coffee station; a large fountain bar with cold-brew coffee, frozen coffee and F'real Shakes selections; a “beer cave” with craft and national brews; an assortment of cold and on-shelf wine; and a large seating area with free Wi-Fi and phone-charging stations.

In the coming months, Starbucks is slated to open a full-service location that includes drive-through service, Meijer said.

The gas station includes 18 fuel pumps — a 50% increase over Meijer’s previous gas station format — and the pumps feature an expanded pumping capacity, with several including diesel and an E85 selection to accommodate flex-fuel vehicles. All pumps are equipped with “Fast Tap” technology to expedite payment. The location will also offer Tesla and other electric car-charging stations later this year.

Meijer noted that the new location incorporates design elements from the convenience store and gas station format that opened at the company’s Cascade store in 2016.

“We believe our customers will appreciate the ease and accessibility that the new design offers and the expanded assortment of freshly made options that reflects their desire for healthier snacks,” Adam Whitney, vice president of gas stations and convenience stores at Meijer, said in a statement.

Described by Meijer as a “first of its kind” for the region, Bridge Street Market has 22-foot-high ceilings, exposed architecture and three garage-style doors that open onto the sidewalk along Grand Rapids’ Bridge Street. Shoppers can park at a connected parking deck.

Meijer broke ground for the store, situated at the corner of Bridge Street and Seward Avenue, in late June and initially gave an early fall timetable for the opening.

“Meijer is thrilled to open Bridge Street Market as part of this exciting development on the city’s West Side,” Meijer President and CEO Rick Keyes said earlier this month in announcing the Aug. 29 opening date. “We believe there’s no better place to launch this new neighborhood market than in our hometown, and in the heart of such an inspiring part of our city.”