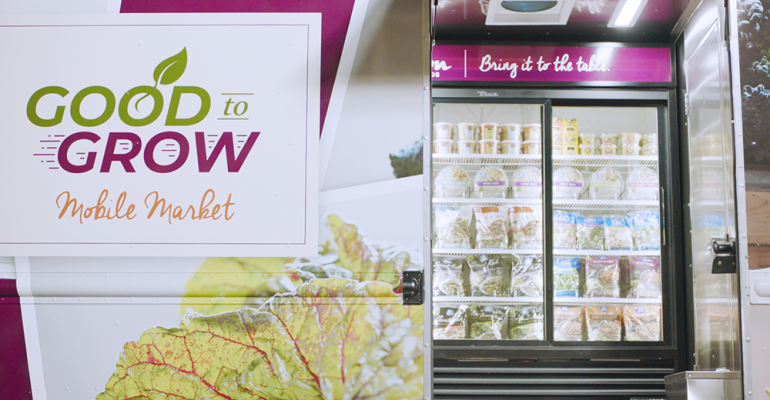 These days it takes more than a solid business plan for companies to succeed — an increasingly large part of the equation is a company’s mission, the values and beliefs of a business that connect it to its customer base and the community at large. Among grocery retailers and food manufacturers, that most often translates into healthier, sustainable products and a commitment to improving the workplace, the environment, the communities which they serve and beyond — essentially, helping to make the world a better place.

Bottom line, in today's world, it's not enough for a company to sell a product or service. Customers are expecting companies to take a position on social and environmental issues in order to earn their business and loyalty.

“In this era of radical transparency, consumers are voicing their opinions, values and beliefs, scrutinizing the actions of organizations and their leadership and holding them accountable. They can see through inauthenticity and won’t tolerate it,” said Kevin Quiring, managing director at Accenture Strategy, which recently released a consumer research study on the topic. “Consumers’ voices can change the financial trajectory of companies. They are more than buyers — they are active stakeholders who are investing their time and attention and want to feel a sense of shared purpose. The winners in this era will not be passive bystanders.”

According to Accenture, nearly two-thirds of consumers globally (63%) prefer to buy goods and services from companies that stand for a shared purpose that reflects their personal values and beliefs, and are ditching those that don’t. Additionally, 62% of consumers globally want companies to take a stand on the social, cultural, environmental and political issues close to their hearts. Moreover, 65% say their purchasing decisions are influenced by the words, values and actions of a company’s leaders. Consumers are attracted to organizations that are committed to using good quality ingredients (76%), treat employees well (65%), and believe in reducing plastics and improving the environment (62%).

All of that is good news for supermarket chains like Albertsons, Kroger and Whole Foods as well as mass retailers like Walmart, all of whom have made strong commitments to social values, sustainability and environmentalism. In the past year alone, Albertsons has made cleaner transportation and reducing waste top priorities, while Kroger’s announcement that it would eliminate single-use plastic bags by 2025 and Whole Foods’ widely lauded $15 per hour minimum wage for employees (part of a larger Amazon initiative) have shown their commitment to more than what they sell. 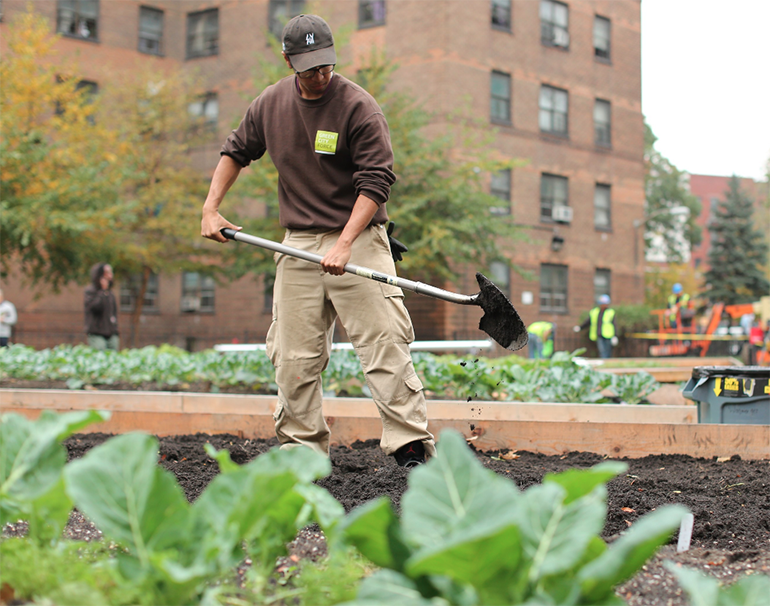 “Our employee promise is to Make Every Day a Better Day,” said Albertsons President and CEO Jim Donald. “That means being a good community partner and a committed steward of the environment. We take that obligation seriously because our company is growing and innovating at lightning speed. And when we move forward, we leave a trail behind.”

Among its achievements in 2018, Albertsons surpassed $1 billion in sales for the O Organics line of USDA-certified organic products. O Organics is now one of the nation's largest private label USDA-certified organic brands, according to the company. The company also donated more than $250 million in food donations to local food banks and raised and distributed $44.6 million to support causes that impact customers’ lives, including wildfire and hurricane disaster relief, veterans’ charities, childhood hunger and cancer research and treatment.

“Reducing our carbon footprint and taking a leadership position on safe environmental practices is a top priority,” added Donald. “The EPA has taken notice of our sustainability efforts, naming Albertsons Companies a Green Power Partner and Safer Choice Partner of the Year for multiple years. We’re committed to operating zero waste manufacturing facilities, which means that 90% of waste is diverted from landfills.”

One of the biggest initiatives undertaken by a grocer was Kroger’s announcement last year that it would be eliminating single-use plastic bags from its more than 2,800 stores by the year 2025 — a move that will eventually halt the distribution of 6 billion single-use bags per year. It’s a simple step with wide, far-reaching impact that even smaller retailers can adopt as part of their mission and still make a dent in the environment.

According to Chairman and CEO Rodney McMullen, “As America’s largest grocer, we recognize we have a responsibility to cut down on unnecessary plastic waste that contributes to litter, harms the environment and, in some cases, can endanger wildlife.”

In New York’s Hudson Valley, family-owned DeCicco & Sons eliminated the bags in its seven stores last fall as part of an overall environmental and sustainability campaign.

“We’ve decided to take this step because we take very seriously the role that we have within our communities, and the responsibility we have to be good corporate citizens,” said CEO John DeCicco Jr. “Over the last several years, we’ve undertaken quite a number of environmental initiatives. We think that being environmentally conscious is not just smart business, but that it’s an ethical imperative.

“Environmental consciousness is something that we believe is important to our customers, and it’s definitely important to us as a family and as a company.” 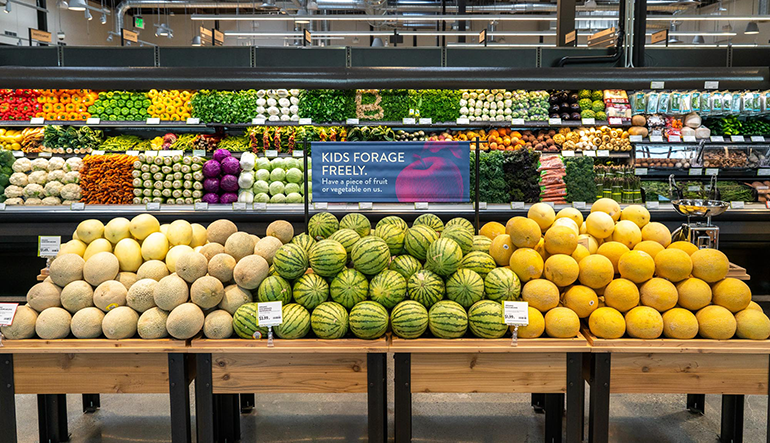 At Seattle’s PCC Community Markets, doing good for the community ranges from its healthy and organic fresh offering to its ban on regional Chinook salmon and its strong stand against single-use plastics.

Eliminating single-use plastics is just one of the many socially and environmentally conscious moves made by 11-store PCC Community Markets in Seattle. (The Pacific Northwest has been a bastion of and leader in mission-based brands of all kinds.) The region’s largest community-owned food market, PCC changed its name from PCC Natural Markets two years ago to better reflect its mission. The company eliminated plastic bags in 2007 and converted to compostable cutlery, cups and straws in the last couple of years. Recently PCC expanded its commitment by pledging to eliminate plastics from its delis by 2022. The company views its shift away from plastic as part of its pursuit of a triple bottom line, in which its social and environmental impact is as important as its financial success.

“Many years ago, four or five years ago, we converted all of our cutlery — forks, knives, spoons — to compostable,” said Cate Hardy, CEO of PCC Community Markets. “Straws were converted around that same time. We then converted our coffee cups, our soup cups and lids and our paper deli containers all to compostable. The next big one is the plastic round containers in half-pint, pint and quart sizes of which we use millions.

That forging ahead extends to PCC’s decision to stop selling the enormously popular Chinook salmon that comes out of the region. “Chinook salmon is one of the most amazing foods that comes out of the Northwest,” Hardy told SN, “but it’s also a critical food for our endangered orca population and so we are no longer selling Chinook salmon from this part of the country. We decided that it’s more important that the orcas have it than our shoppers. And that decision has been very, very well received.

From the smallest of startups to the largest conglomerates, food manufacturers and suppliers are also serious about establishing and carrying out missions that improve society and the world, in ways small and large.

Unilever’s  Growing Roots, an organic, plant-based food brand, builds on Unilever's multiyear commitment to urban farming initiatives, which establishes and funds partnerships to unlock access to fresh foods and nutrition education in communities across the country.

"What's so special about Growing Roots is that it started as a social mission that our employees were passionate about, borne from the belief that everyone should have access to affordable, nutritious food," said Matthew McCarthy, vice president of foods, Unilever North America. "Seeing the transformational impact urban farms have in communities, we created a brand from the ground up to help fulfill and extend that mission."

Since 2015, Unilever has been part of an innovative, public-private partnership with the city of New York's Building Healthy Communities initiative and Green City Force to create six urban farms in New York, which together have already generated more than 32,000 pounds of organic produce. In addition to the company providing funds, Unilever employees volunteer thousands of hours each year to these efforts. Based on the program's successful community impact in New York, Unilever has extended outreach to Los Angeles, Houston, Miami and Chicago as well. By directing 50%of its profits to urban farming initiatives, the Growing Roots brand allows Unilever to build a sustainable model for long-term community impact. 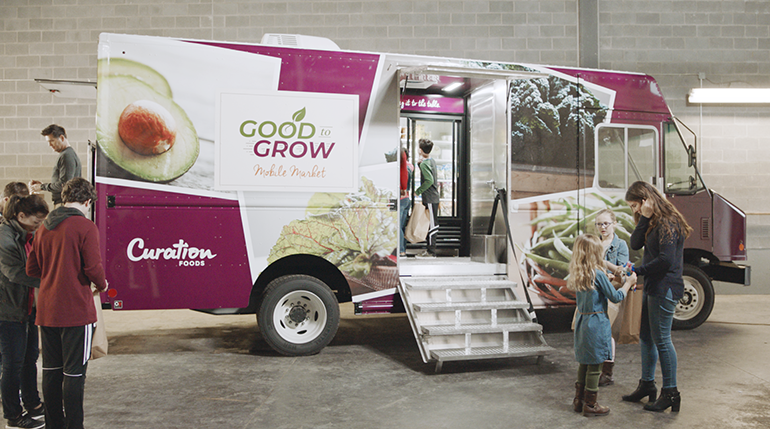 "The mission of Curation Foods is to provide access to fresh, delicious, plant-based foods made from 100% clean ingredients to as many people as possible in a way that preserves and protects our planet," said Molly Hemmeter, CEO and president of Landec. As part of its commitment to providing widespread access to fresh, nutritional foods, Curation Foods is supporting local communities, donating to food banks and nonprofit organizations that promote youth and health through its StrongRoots community wellness program and launching its Good-to-Grow Program, an employee-led food truck initiative to reach neighborhoods with limited access to fresh food.

There’s ample research showing that being a responsible business is good for a company’s bottom line. According to a Nielsen study, almost three out of four Millennial consumers are willing to pay extra for sustainable product offerings. Seventy-two percent of people aged 15 to 20 (also called Generation Z) were committed to buying products with a reputation of environmental or social values. People ages 50 to 64 were interested in purchasing environmentally friendly products as well. “Fifty-one percent of Boomers surveyed are willing to pay extra, an increase of seven percentage points since last year. This segment will remain a substantial and viable market in the coming decade for select products and services from sustainable brands,” reports the study.
Likewise, a 2017 report conducted by the Natural Marketing Institute that engaged more than 4,000 U.S. adults, found 58% would be more likely to try a product if it has a positive impact on the environment or society, and 54% would be more likely to buy their products repeatedly. “Consumers are also more interested than ever in aligning their personal values with the brands they buy, raising the bar for companies to clearly define and articulate their values,” according to the study. “If consumers are aware that companies are mindful of their impact on society and the environment, it positively impacts their trial and repeat purchasing behavior along with price insensitivity.”

PCC Community Markets is one retailer that is very mindful of its impact on society and the environment. As CEO Hardy told SN, “We believe that our ability to do good, which includes everything from making sure that families have great food that they can take home but also that farmers and growers and ranchers are well taken care of, our ability to do that directly scales with the number of stores we have and our platform gets bigger. People hear about us and maybe other retailers wake up and say, ‘Hey, maybe we should make compostable cutlery.’ And that would be delightful for us because we really are trying to make the world a better place, and not just here where we are.”