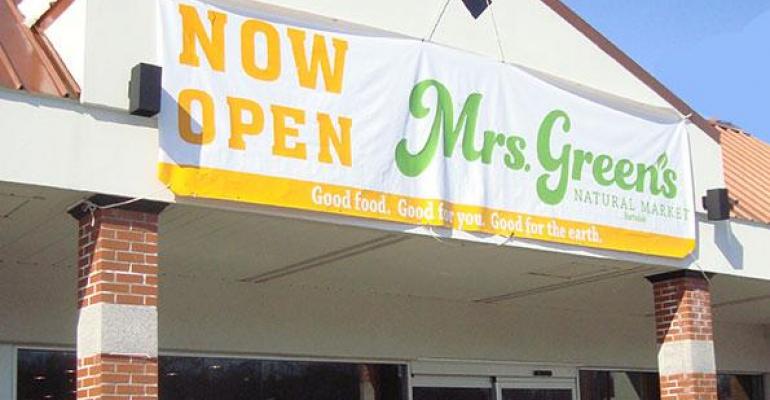 Natural Markets Food Group, parent of the struggling natural/organic chain Mrs. Green's Natural Markets, on Tuesday said it was closing half of its 10 stores and that its CEO, Pat Brown, was stepping down effective immediately.

The Irvington, N.Y., chain said it would instead focus on five "core stores" in its Westchester County, N.Y., home market, and that it would begin to replenish supply to those units over the next several weeks.

As previously reported, all of the chain's stores — including several under the Planet Organic brand in Canada — had gone without supplies for several weeks following news that it was closing stores in New Jersey, Illinois and Connecticut.

On Tuesday Mrs. Green's said stores in New York's Greenwich Village, Rye and Tarrytown, as well as Stamford and Fairfield, Conn., would close, leaving units in Yorktown Heights, Briarcliff, Mount Kisco, Eastchester and Larchmont open. As part of the transition, CEO Pat Brown was stepping down. His duties are being taken over by existing management until a permanent replacement can be named. Mrs. Green's, founded as a family-run business 30 years ago and today owned by the Toronto-based hedge fund Catalyst Capital, was beset by an overambitious expansion plan that grew the company to as many as 20 stores, many of which survived fewer than two years.

Brown, a veteran of H-E-B and New Seasons Market, was brought in as CEO in 2013 and simultaneously reeled in far-flung but failing stores while continuing to add new ones, including the Greenwich Village and Connecticut stores. The company until earlier this month said it would proceed to build new stores including one planned early next year in Dobbs Ferry, N.Y. It closed a store in New Canaan, Conn., several weeks ago saying it was a temporary closure but it did not appear that store will reopen either.

It was not immediately apparent how the Planet Organic stores in Canada, or the Richtree restaurant chain NMFG also operates in Canada, would be impacted by Tuesday's announcement.

“Mrs. Green’s Neighborhood Market has been a part of the fabric of the Westchester community for three decades and this announcement demonstrates our long-term commitment to providing our customers with the locally-sourced produce and healthy-living products they love,” the company said in a statement. “While the closure of any location is difficult — especially because our customers and communities have supported us — they are also necessary as we focus on our core, profitable stores.”

The company said it would provide severance packages and transition services to impacted managers and associates.

“We thank Pat Brown and all of our hard-working associates for their commitment to the company, and look forward to working with our new leadership team as we get back to doing what we do best — providing our customers with healthy, locally-sourced produce,” the company added.