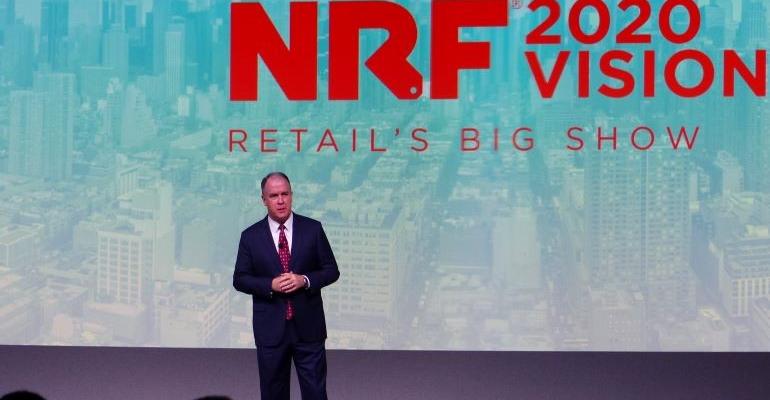 Photo by Russell Redman
“As a result of our investments, consumers today quite simply have more," BJ's CEO Christopher Baldwin said in the opening address for NRF 2020.
News>Retail & Financial

NRF 2020: Retailers invest in getting closer to customers

Outgoing NRF Chairman Christopher Baldwin, chairman and CEO of BJ’s Wholesale Club, opened the show Sunday morning describing a retail sector that is “thriving and winning.” Baldwin, NRF chairman since January 2018, is being succeeded in that role by Mike George, president and CEO of Qurate Retail.

“Retail is recognized as one of the most consumer-centric and innovative industries in the world today,” Baldwin told the throng of NRF attendees gathered at Manhattan’s Jacob Javits Convention Center. “As an industry, we’ve invested billions and billions of dollars over the past decade. This massive investment has started to transform our industry, and it has changed the way consumers shop and how they live.”

Consumers are in charge

Customers at retailers of all stripes have benefitted from investments to enhance the shopping experience, according to Baldwin.

“As a result of our investments, consumers today quite simply have more. They have more access to products, they have more information, they have more speed and they have more convenience, he said. “The last one is a big one. Eighty-three percent of consumers say convenience is more important to them now than it was five years ago, and all of this translates to more power for the consumer. Think of it this way. Today, the largest retailers in the world will bring your purchases to the curb for you. They'll shoot virtually anything to your home. They'll also have it there today or the next day — and, of course, all of this is done with free shipping. The new consumer power is felt in every area of this great industry.” 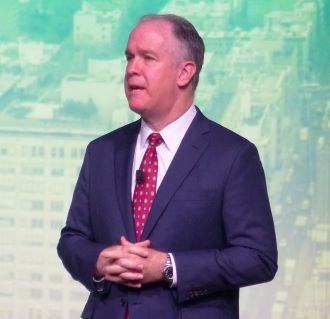 "Retailers are taking the lead in personalization, new technologies that will give the consumer even more power," said Baldwin, who has served as NRF chairman for the past year. (Photo by Russell Redman)

Baldwin cited Target Corp. as one of the companies reinventing retail by using all tools at its disposal in pursuing a customer-first strategy.

“There's probably no better example of how retailers have succeeded with a relentless focus on the consumer,” he said. “Whether it's designing a store that pays homage to a 1950s bowling alley or innovating with artificial intelligence and virtual reality, Target leads the way in reimagining physical and digital retail in a way that empowers the consumer.”

Shoppers have noticed the changes that retailers are making and, more important, they appreciate it, according to Baldwin. More than 60% of consumers say retail innovation has improved their shopping experience, and 80% for online shoppers think so, he said.

“Spend a minute to think about any other area in modern life where the vast majority of American citizens believe that things have improved over the past few years,” Baldwin told attendees. “Moving forward, consumers are expecting even more. We know that the majority of young shoppers like it when retailers speak to them personally. To do this, retailers are taking the lead in personalization, new technologies that will give the consumer even more power. We are already helping consumers navigate countless product options, assisting them as they screen products and make choices for themselves and for their families. When you look at the innovative work happening in retail, some of which you’ll see demonstrated this week, it's clear that we're just in the very beginning of this revolution to give consumers more power.”

In the NRF 2020 opening keynote, Microsoft CEO Satya Nadella emphasized the need for retailers to harness today’s huge flow data — including their own vast stores of transactional and customer data — and not fall behind in developing their digital capabilities.

“Fourteen petabytes of data is generated every hour in media, and that in some sense is what’s shaping the entire economy. It’s the demand signal for the world — that’s the data that you have,” he said. “And the question, of course, is what is it that we are going to do collectively as an economy, as a society? What is it that you as retailers are going to be able to do with this data?” 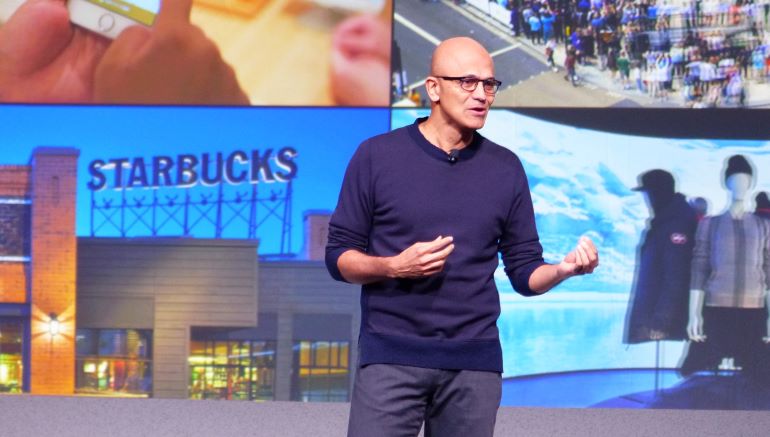 "How fast are you adopting the latest and greatest technology? The one thing you don’t want to do is fall behind," Microsoft CEO Natya Sadella told attendees at NRF 2020's opening keynote.

To that end, Microsoft’s engagements with retailers all over the world has focused on “driving digital to become a core part of operations” and “enabling intelligent retail,” according to Nadella.

“It starts with knowing your customers,” he said. “How do you use all that data we talked about to know more? Consumer behavior and understanding is what retail all about, and now how do you use digital to take what you always have done very well to the next level?”

Bringing the back office and front office together in “one seamless process” is the new requirement for retailers and other businesses, Nadella noted.

“One is how fast are you adopting the latest and greatest technology? The one thing you don’t want to do is fall behind,” Nadella explained. The other piece is that retailers will need to develop digital capabilities that they can claim as their own. “You have to be cool on your own. You have to really take pride in the digital capabilities you have built.”

For retailers, Microsoft aims to be an enabler of this transition, stressed Nadella. “In the 2020s, it's not about growing your dependence on us or any technology or any tech vendor community. It's about helping you all in building independence when it comes to digital technology. That's our mission.”

Today, 30% of e-commerce sales stem from recommendations being made to consumers, and 80% of shoppers expect retailers to make personalized offers, Nadella pointed out.

“So that means that you take those data assets —not silos, all of the data, everything you see — and then serve your customers,” he said. “That's the difference with an AI [artificial intelligence] company. It's not about data in any one system but your ability to take all the data across all systems, from supply chain to merchandising, to drive something like a recommendation engine. And that's what's going to define it.”

The intelligence needed to create a better shopping experience for customers is not just in systems, but also right in the stores, where employee roles are evolving and retailers are marshalling their knowledge. 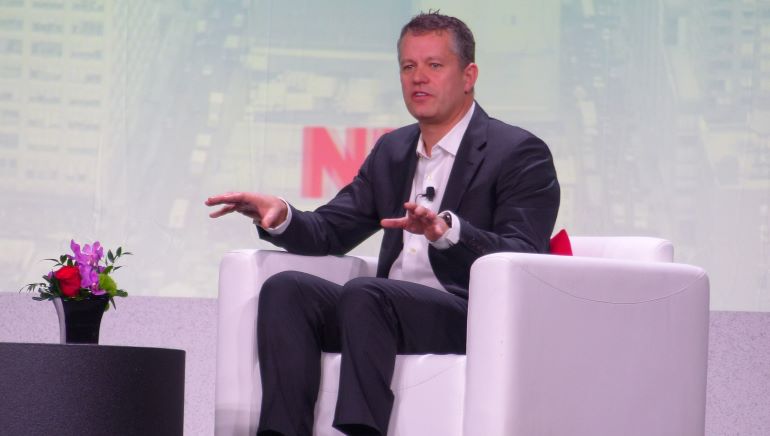 “One thing you never want to do in retail ... is you never say you have the answer and we’ve figured it out, because our customers are always changing,” Walmart U.S. CEO John Furner said in a keynote discussion session at NRF 2020.

“What happened is you would find the highest-paid associates not working on the sales force in the front of the building. They worked in the office in the back of the building. With technology today, we decided in early 2017 to make an investment to move the work,” Furner said. “That's a big topic for all of us, as the changing work and the changing workforce that we're all facing. We had to move people from roles that were not serving members to a place where the technology of the day was moving to the sales floor. So today in that business, the highest-paid ‘golden glove’ is the meat cutter, the person who runs the meat department. Previously, it would've been an invoice or a clerk job.”

Under the change at Sam’s, employee training and development programs and technology additions were designed to help the retailer’s best long-term, tenured store associates “who wanted to be there” get on a career path, leveraging their deep experience, said Furner. Employees also got raises, including up to $8 an hour for team leaders.

“And the jobs are changing. I was in a Walmart store a few weeks ago that has this wonderful store pickup business in grocery click-and-collect. There are over 60 people in that department. Five years ago, that wasn’t a job that existed,” he noted. “There are more jobs coming. It's just a matter of giving people a path and the ability to learn, train and develop so they can transition from a job today to a job that’s going to be here in the future.”

The improved operations, customer satisfaction and financial performance at Sam’s resulting from the change were evident, according to Furner. But even as he’s moved on to Walmart, these efforts at the warehouse club chain continue.

“One thing you never want to do in retail, and I want to be really careful with this, is you never say you have the answer and we’ve figured it out, because our customers are always changing,” he added. “Regardless of how well you think you're doing, a week from now, a month or a year from now, there will be much more to do.”