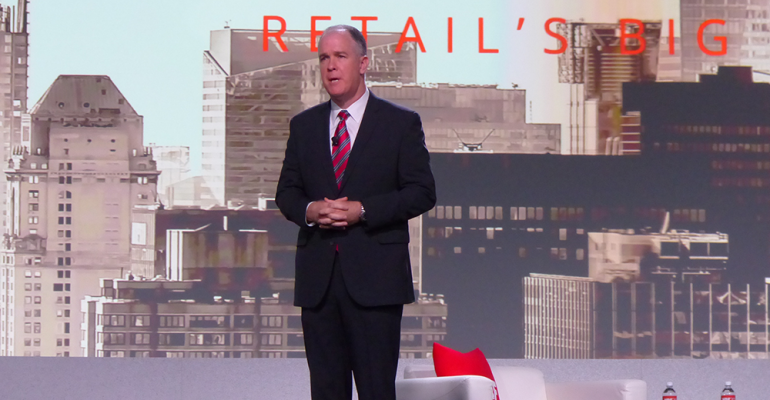 Brick-and-mortar retailers are headlong into the digital transformations necessary for what’s shaping up to be an omnichannel future, top industry executives said at the National Retail Federation’s 2019 Big Show in New York.

“To paraphrase Mark Twain, I’m happy to say that the rumors of our demise were greatly exaggerated,” Baldwin told attendees at Manhattan’s Jacob Javits Convention Center. “I would love to say that retail is back — but that would be wrong. Retail never went away. As I stand here today, I can say that our industry is more healthy, vibrant, innovative and exciting than ever.”

Baldwin cited Walmart’s strategic acquisitions, “tremendous” investment in technology, increased automation throughout the company and aggressive rollout of grocery pickup and delivery in the United States.

“It’s so hard to think of a better example of how retail is being reimagined than Walmart and Sam’s Club,” he said. “Not long ago, Walmart was known as a brick-and-mortar powerhouse. Today, it is very frequently mentioned as one of the most innovative companies in the world.”

Meanwhile, Target “sets the standard for being an inspiring place to shop,” according to Baldwin. The retailer has done that by elevating the shopping experience with a next-generation store design, store remodeling and investment in store associates to boost customer service.

“It’s using stores as hubs to more conveniently fulfill all of the options consumers have at Target, making our ‘Target runs’ even more easy every single day,” he explained. “And Target continues to create exclusive brands that offer incredible value and drive excitement across its assortment.”

“Brick-and-mortar stores still really matter. Sometimes we forget that almost 90% of shopping is done in stores,” he noted. “But we all know retail is far more than brick-and-mortar today.”

One need only look at the 2018 holiday season, which was marked by a “significant spike” in multichannel shopping, Baldwin said. The number of people shopping both online and in-store during the holiday period rose 40% versus a year ago, and multichannel shoppers spent over $100 more than single-channel shoppers. Mobile technology also is changing the equation: 90% of consumers younger than 35 used a smartphone or tablet for purchasing decisions, and almost 90% of Americans — regardless of age or income — shop at value retailers, aided by mobile devices that help provide price transparency.

“Now, consumers want to buy when and how they want — and, of course, with free delivery right on top. All this creates enormous opportunities for our industry,” Baldwin said. “Together, we are reimagining one of the world’s largest industries. E-commerce combined with brick-and-mortar gives us the chance to make customer experiences better than ever.”

Few retailers understand that better than The Kroger Co. In a talk on Sunday with CNBC’s Sara Eisen at the NRF Big Show, Kroger Chairman and CEO Rodney McMullen shed more light on Restock Kroger, the supermarket giant’s plan to reshape the company by redefining the customer experience.

“There’s so much change going on in retail, and it’s so exciting,” McMullen said. “Restock Kroger is really our commitment to our customers and associates to change who the company is. Our vision is to serve America through food inspiration and uplift. And we’re really transforming the company from a grocery company to a growth company. If you look at changing the customer experience — where they can get what they want, when they want it and any way they want it — and partnering with our associates and investing in them in significant ways — we’ve incrementally invested $500 million in our associates — there’s just a ton of change going on.” 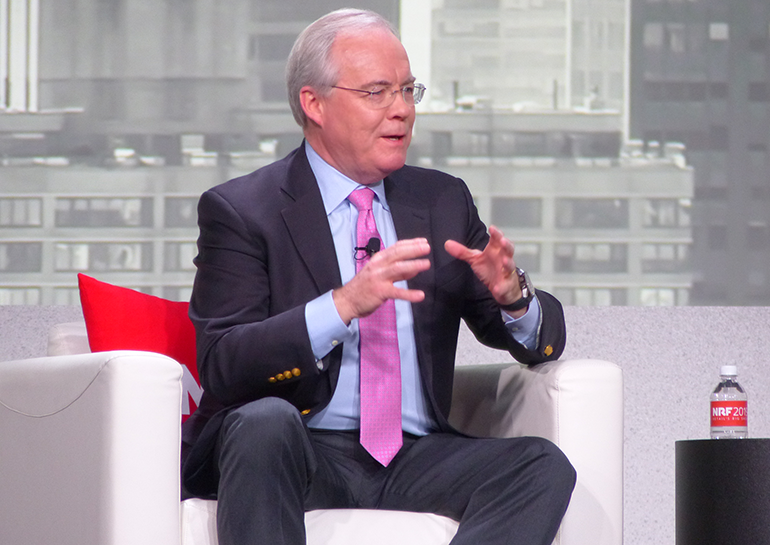 In May 2018, Kroger unveiled an exclusive U.S. partnership with U.K.-based online supermarket Ocado. The companies plan to build 20 automated e-commerce warehouses in the first three years of their pact. Then in August, Kroger launched its own online grocery delivery service, dubbed Kroger Ship, and kicked off a pilot of driverless delivery vehicles in Arizona with technology partner Nuro. The retailer, too, has greatly expanded online grocery fulfillment, with most of its stores now offering pickup and delivery.

Another sign of change came this past fall, when Kroger executives said the company aims to cultivate alternative profit streams by monetizing its huge stores of data. Those business opportunities include partnerships, media, consumer packaged goods (CPG) insights and personal finance.

“People will always eat. The way people eat will always change. If you think about all the data from customers coming into the store or online, how do you use that data to help the customer better and create some new business opportunities from that data — media, partnerships and other things,” McMullen said. “We are in the middle of transforming the business to a growth company.”

Partnerships are among Kroger’s more brow-raising efforts. In December, the company announced Kroger Express, a curated assortment of grocery products (led by Kroger own brands) and Home Chef meal kits to be rolled out to 13 Walgreens drugstores in Kentucky. And last week, Kroger said it’s teaming up with Microsoft to jointly develop and market a commercial retail-as-a-service (RaaS) product for the retail industry. The solution is to be piloted at a Kroger store in Monroe, Ohio, and a QFC store in Redmond, Wash.

“Our test with Walgreens will allow us to accelerate the number of places where customers can pick up,” McMullen said. “From a technology standpoint, our partnerships with Ocado and Microsoft will significantly accelerate the journey to be able to offer the customer a curated and incredibly efficient experience.”

When Eisen asked how Kroger will go about becoming a growth company, McMullen noted that changing the business model is “one of those things where you can’t do it overnight.” 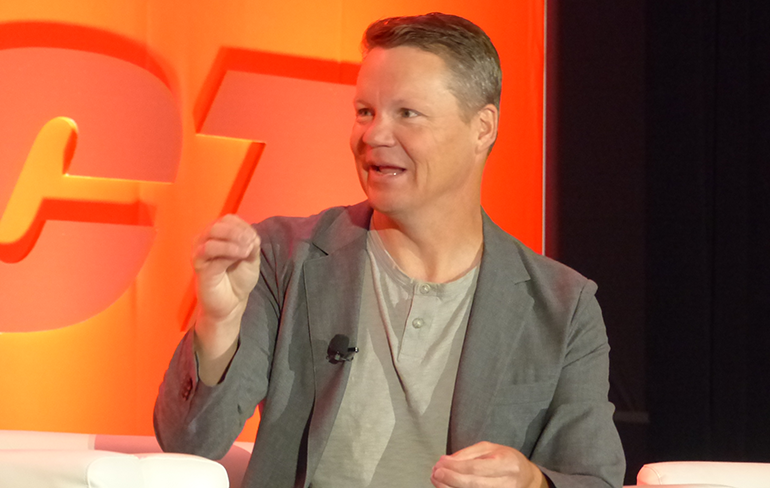 Jeremy King, executive vice president and chief technology officer at Walmart, said in a discussion Sunday with The Wall Street Journal’s Sarah Castellanos that Walmart’s gear change from a brick-and-mortar company to a digitally driven one was facilitated by a revamped technology organization.

Two years ago, Walmart split its technology structure into a stores-focused team and an e-commerce focused team, led by him and Clay Johnson, executive VIP and chief information officer.

“It really made sense to have somebody focus on the internal side of the business and for somebody to focus on the retail side,” King said. “Customers, of course, don’t see the difference between Walmart.com and a Walmart store. So that integration not only made it easier from an organizational standpoint, but it also made it 100% sure that we were focused on our customer.”

Walmart plans to have 2,140 online grocery pickup sites, covering 69% of U.S. households, and online grocery delivery through 800 stores, covering about 40% of the population, by the close of its 2019 fiscal year at the end of January. For fiscal 2020, the retailer is targeting about 3,100 curbside pickup and 1,600 delivery locations by the year’s end. Last week, Walmart kicked off a major ad campaign led by eye-catching, action-packed TV spots emphasizing the speed and ease of Walmart Grocery Pickup service.

“Right now, what’s really working for us is groceries and grocery delivery and pickup. And we’re seeing real traction with our customers; they love it. How we can make that experience even better is what we’ve been focused on,” King said.

Walmart also is evaluating the benefits other technologies, such as blockchain, which “can make a dramatic difference” in food safety, according to King. In late September, Walmart announced it would begin requiring suppliers of fresh, leafy greens to use the IBM Food Trust Network blockchain-based system to trace products from farm to table.

“It’s pretty early. But we’ve seen a lot of traction in the produce section in particular. It’s all about food safety. Consumers are asking for this — they want to know where it came from and know if it’s safe,” King said, referring to the recent romaine lettuce recalls. “In the past, it would take days to figure out which stores got these items. Now it takes seconds. Walmart is all about saving people money so they can live better. The way we do that is by implementing technologies that pull costs out of the overall system so we can invest in price and continue to lower prices for our customers.”

At Target, Cornell is still celebrating the fruits of a year that saw the retailer hit its highest sales figures in more than a decade, thanks to a wave of record in-store customer traffic and impressive digital growth.

During his presentation at NRF on Monday, he talked about Target’s digital success but emphasized that brick-and-mortar stores remain critical to the company’s long-term plans. 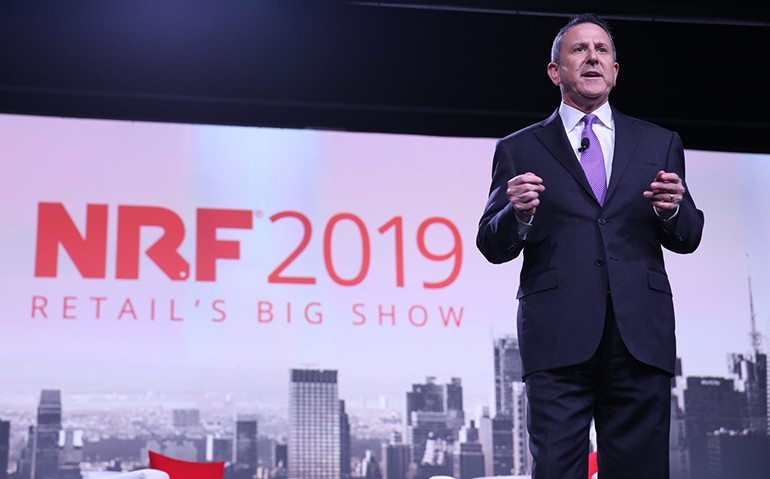 “A decade ago, Target operated Target.com as a separate business from its stores,” he recalled. “That changed as we came upon the realization that our 1,800 stores are also distribution points for digital sales. Today we believe our stores are our single biggest advantage.”

To illustrate that point, Cornell noted that in 2018, three out of every four digital transactions was fulfilled by a store, via delivery or in-store pickup. (And that includes grocery purchases through Target’s Shipt same-day delivery service.)

Beyond just using its stores as fulfillment centers, Target is also focusing on the physical in-store shopping experience, with massive investment in redesigns, store footprints and new, smaller formats, said Cornell. “Those small-format stores, such as the ones here in New York City, are among our most successful sites,” he added.

“People still appreciate physical stores,” he continued. “Eighty-five to 90% of all purchases still take place in a physical store. And younger people still like the interaction of shopping in stores with friends. It’s important to offer a great store experience.”

Concluding with a shout out to Target’s more than 300,000 employees, Cornell said, “There is still no substitute for human connections. Our team is the key to our success.”