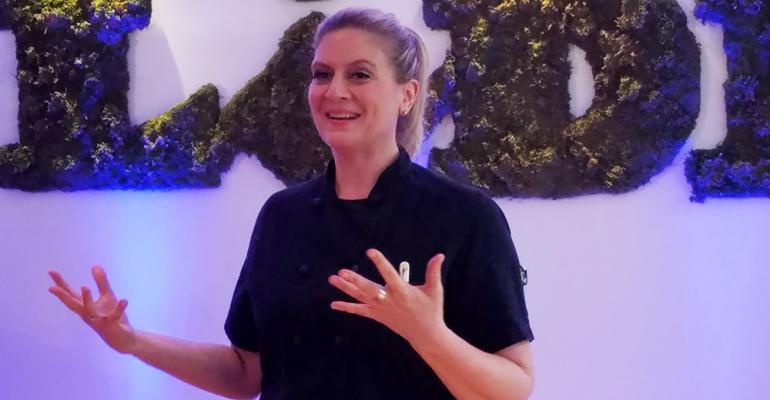 I wish I’d had more time to have sampled Amanda Freitag’s salmon BLT but there was a lot to take in when executives of Lidl met the press for the first time here in New York this week.

Freitag is familiar to millions as one of the judges on the television cooking competition “Chopped,” and the event Tuesday was something like a scene out of the show: A mystery basket was thrown open, the ingredients revealed, and a timeline to put it all together was introduced: Lidl’s first U.S. stores will open on June 15, precisely four years since we first reported the German discount giant was exploring U.S. shores.

And like a contestant on the show, the retailer presented its best. Lidl highlighted its Preferred Selection range of imported specialty products and organics; a line of exclusive wines and cheeses; fresh-baked breads; a menu prepared of its fresh items by chef Freitag; and emphasized aspects of its model (seafood sustainability certifications, quality buying standards, a simple shopping experience and of course, price) designed to lend it credibility when the clock runs out and the finished plate is presented to its shopper-judges.

In this sense the message was that Lidl intends to draw shoppers on quality but keep them there on price, rather than the other way around as U.S. discounters have traditionally done it. Though it’s the combination of those ingredients — the plating, if you will — where Lidl ultimately intends to differ.

Besieged by reporters (my mouth spent more time asking questions than sampling Freitag’s tasty appetizers), CEO Brendan Proctor patiently set the background, again and again. Lidl is a $91 billion international retailer with lots of experience expanding to new countries. Its opportunity in the U.S. is to use its sourcing experience, buying power and easy-to-shop format to curate a limited assortment store that will address compromises in quality, price and convenience typical of stores here. Lidl will employ an everyday-low-price strategy but drive excitement with promotions. “Fresh 5” specials — three fruits and vegetables, two meats or fishes — will break on Thursdays and Mondays; and themed weekly specials on nonfood items (Proctor said these would include yoga pants, lawnmowers and leather jackets) will be offered on a while-they-last basis.

Proctor said he grew up helping his parents run a corner grocery store in Donegal, Ireland, and has been with Lidl for his entire 17-year professional career, joining as an assistant store manager out of college. He came to the U.S. two years ago to complete the build-out began by former Lidl Ireland colleague Kenneth McGrath (who now is leading Save-A-Lot, lest we forget), and expressed an anxiousness to get it on and a confidence that the concept can succeed, in part, he said, because Lidl has a demonstrated ability to make adjustments. Lidl also has the support of private owners, the Schwarz Group, likely to have more patience than, for example, Tesco, whose shareholders demanded they abandon the U.S. when its Fresh & Easy concept underwhelmed out of the gate.

He did all this without addressing competitor strategies specifically, or understandably, revealing just how prepared Lidl might be to fight it out on price with Walmart, Aldi and others. We’re just going to have to watch that show when it airs, and see who gets chopped.

I reported this week on an extraordinary memo detailing the chaotic aftermath of the Central Grocers bankruptcy as seen through the eyes of Associated Wholesale Grocers CEO David Smith. The letter to members explained system-wide service pressures of having to ramp-up supply lines for dozens of new customers around Chicago — many of them high-volume stores that needed supply immediately — that were suddenly left without a distributor when Central’s attempt to sell its warehouse fell through and precipitated the Chapter 11 filing.

Central until then had an agreement to sell the facility to an unnamed buyer; AWG in turn had a tentative agreement with Central on a seven-week wind-down to transfer supply, but they collapsed one after another.

One take I got following on that story this week was that these competing distributors, smelling opportunity around Central’s financial troubles, may have made it more difficult from Central to find buyers. They wanted the customers, not the business.

Earnings reports coming in over the last week gave some hope that the awful conditions plaguing retail food sales are easing — a bit — reflected by better than expected sales at Target and continued momentum at Wal-Mart Stores, both companies indicating sales picked up in March and deflation eased after a very slow start to the year. That suggests there’s hope that Kroger can do better than its modest expectations when it reports early next month. By then retailers will be lapping the awful 12 months they’ve had.