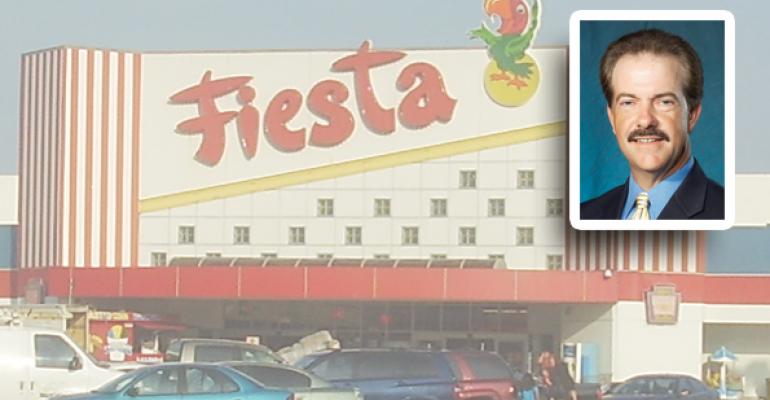 Michael Byars, the former CEO of Bi-Lo and Minyard Food Stores, has been appointed CEO of the 60-store chain. He is succeeding longtime CEO Louis Katopodis, who is retiring.

C&S Wholesale Grocers, which acquired Fiesta supplier Grocers Supply last year, will continue to supply Fiesta Mart stores. Acon is a Washington-based private investor whose other investments include the Mexican discount chain Waldo’s and Carulla, one of the largest supermarket chains in Colombia.

"We are excited to be partnering with Mike and the entire Fiesta team," Ken Brotman, a founding partner of Acon, said in a statement. "Fiesta has established itself as a leading international and Hispanic grocery operator in the United States, and we look forward to building value in a business that is very well positioned for continued growth.”

Byars most recently served as CEO of Bi-Lo, where he led an effort to reinvigorate the brand through neighborhood merchandising and a strong promotional program.

"I sincerely appreciate the trust and confidence placed in me by Acon. I look forward to working with the company's employees to further strengthen Fiesta's position and growth in the markets it serves," Byars said. “I would like to thank Louis Katopodis and his team for positioning Fiesta as a market leader in the areas we serve.”

Fiesta Mart operates stores under the Fiesta Mart and Carnival banners in Houston, Dallas-Fort Worth and Austin markets and the Fiesta Fresh Market in Conroe, Texas. The Carnival stores formerly belonged to Texas-based Minyard, which employed Byars as its CEO prior to his joining Bi-Lo. Byars previously spent 19 years with Delhaize Group.

An earlier version of this story incorrectly reported that Fiesta Mart had been acquired by C&S Wholesale Grocers last year. Fiesta Mart remained with its family owners while C&S acquired its parent company, Grocers Supply Co.