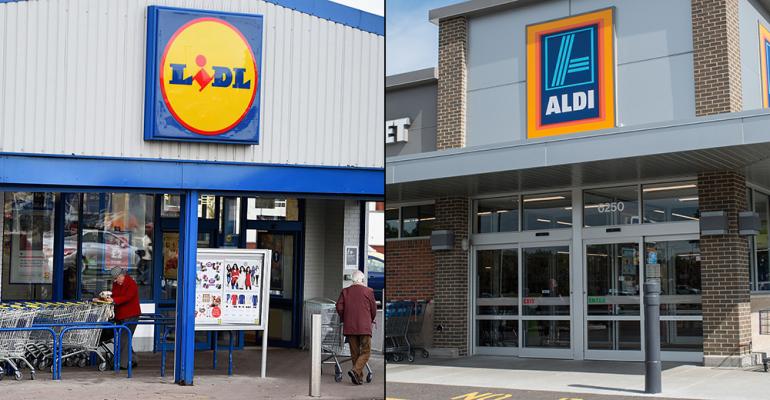 Retail lessons from the U.K.

What U.S. supermarkets can learn about e-commerce, combatting Aldi & Lidl

American supermarket retailers have much to learn from the experiences of their British cousins over the last five years. This is because U.K. supermarkets are much further along the curve of both e-commerce and the combined impacts of Aldi and Lidl, the two German limited assortment store retailers. The latter now hold market shares in the U.K. of 6.1% and 4.6%, respectively: almost 11% combined, versus under 3% for the limited assortment format in the U.S.

The result of the intensifying store development and competition from Aldi and Lidl in the U.K. has been prolonged deflation for over two years, with grocery prices now about 6% lower than they were in late 2014. And now Britain's grocery retailers are also threatened by the arrival of AmazonFresh.

As in the U.S., the new wave of small store competition (including the threat of Amazon) has increased “supply,” squeezed profits, and forced major and wrenching responses by British food retailers. For example:

• Widespread cost-cutting and price reductions — although the continuing deterioration of the market position of Walmart's Asda operation (the former price leader) appears to be proving that this, by itself, is not enough.

• Severe cutbacks in the numbers of new stores being opened and on individual store sizes (few, if any Tesco Extras). Reduced store sizes are the inevitable result of the weakened position and appeal of center-store products and brands.

• Biting the bullet on bad locations, and improving the quality of new store site selection. For example, the new management at Morrison's has closed all its hastily opened M-Local convenience stores (many were former Blockbuster Video stores!) and is now working with Rontec, a fuel retailer that has a proven site selection record.

• Reflecting changing demographics, such as smaller households, any expansion is now focusing on small (3,000-square-foot) stores such as Marks & Spencer's Simply Food. These "convenience stores" are totally unlike the American model, focusing on fresh foods and ready meals, and including finely honed ranges of grocery staples. As a result, they attract more female customers than do U.S. c-stores.

• There is a renewed focus on core operations. Under new leadership, Tesco and Marks & Spencer have closed distractions, formerly justified by "extending the brand" groupthink. In Tesco's case, the axe has been wielded on overseas expansion (Fresh & Easy), restaurant operations (Giraffe) and garden centers (Dobbies).

• Central to the focus on core operations is increasing the appeal and performances of existing supermarkets via premium private brands (e.g. Tesco's Finest) and products (e.g. organics, “free-from,” locally sourced). In addition, true meal solutions (not U.S.-style portions or kits) remain a core weapon in “restaurant substitution.” That is, preventing sales losses to — or taking sales from — the inherently more labor-intensive and higher-priced restaurant business.

There are signs these strategies are working. The growth rates of both Aldi and Lidl are now cooling — although still leading the pack.

However, problems remain. Sainsbury failed with its Netto franchise (from Dansk Supermarkets), an attempt to imitate the Aldi format, and is now pursuing an ambitious “digital strategy” through the acquisition and integration of Argos (the non-foods catalog showroom retailer). Time will tell if this is successful.

For competitive reasons — and the opportunity presented by a densely populated market — British grocery retailers have invested heavily in e-commerce. However, there is now a major question mark over the economics of money losing "click-and-deliver" operations, even in densely-populated Britain. Reportedly, the average cost of a grocery delivery in the U.K. is about $20 (U.S.) — but the average fee to each customer is only approximately $7 (U.S.). Amazon may work out these economics but outside of London and other major cities “click-and-collect” is emerging as a much sounder business model. Most grocers — in both the U.K. and U.S. — may ultimately have to recognize Sol Price's wisdom concerning the “intelligent loss of business.”

There are obvious implications from much of the above commentary for the U.S. supermarket industry. However, the key takeaways may be the following:

a) Don't wait for deflation to end. For competitive reasons, it may not — particularly if the U.S. dollar remains strong.

b) Margins and prices will have to fall, as belatedly recognized by The Fresh Market, for example. This process is being driven in the U.S. by Walmart as it confronts the growing competition presented by Amazon as well as the continuing impacts of Aldi, Lidl and the dollar stores.

c) Price impacts will not be conveniently limited to the low end of the market. Reflecting the Domino Theory, they are working their way upwards throughout the entire spectrum of store formats — including local and regional quality and service chains as well as Whole Foods and the other natural/organic retailers.

d) Finally, grocery retailers need to be cautious about their “digital strategy,” particularly outside the fashionable inner districts of major urban areas. Grocery delivery should not be viewed as a must-have premium service. Remember that Amazon is allergic to profits, and that service and quality problems go with the territory. It may be a business that needs to be surrendered to a small number of providers — with click-and-collect being the best bet for an economically viable digital offering.