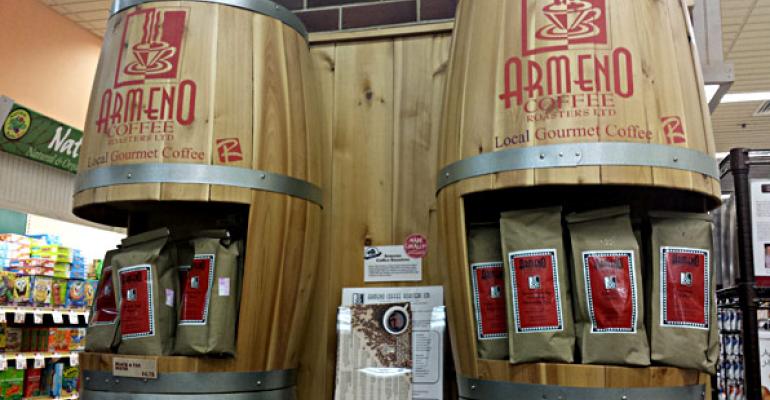 <p>Developing a reputation as a destination for categories such as coffee has helped Roche Bros. stores distinguish themselves among new market entrants.</p>
News>Retail & Financial

&quot;This is an exciting time for our company.&rdquo; &mdash;PAUL McGILLIVRAY, Roche Bros.

Although the greater Boston market has seen no shortage of activity among supermarkets in recent years, things have been relatively quiet at Roche Bros.

But that’s changing. It turns out that while Whole Foods and Wegmans were invading, Market Basket expanding, and Shaw’s being sold and repositioned, family-run Roche Bros. was quietly at work developing concepts designed to address the market that’s changed around it — as well as a changing shopper.

The company next week is set to open the second location — and officials say, the most fully realized — of the Brothers Marketplace specialty food store concept it debuted in May. Earlier this month, Roche began construction of a new flagship at the site of the historic Filene’s Basement department store in downtown Boston. That store, likely to become the highest-profile unit for the upscale chain, is expected to open early next year.

For a company that had not opened a new store in some five years, this is a sudden flurry of activity.

“Overall I’d say this is an exciting time for our company,” Paul McGillivray, VP of sales and marketing for Roche Bros., told SN in an exclusive interview at Roche Bros.’ Wellesley, Mass., headquarters. “Based on the recession, economic conditions, the level of competition in the marketplace and the churn, it’s been a period first and foremost of protecting the long-term success of the business. And since we’ve done that successfully, we’re now out looking for new opportunities.”

The next Roche Bros. conventional supermarket to be built will be new to its neighborhood but in a familiar destination for retail.

Workers this month commenced construction of a 25,000-square-foot Roche Bros. at the historic Burnham Building in Downtown Crossing. The store will consist of 3,000 feet at street level and 22,000 square feet occupying the historic Filene’s Basement, the beloved but defunct Boston department store.

The project is part of a massive redevelopment including construction of a neighboring residential tower and new retail tenants including the European fashion retailer Primark, which has chosen the site for its first U.S. store.

“We’re privileged to be taking over such a landmark iconic retail location,” McGillivray said. “It’s a very well-known historic location, and the basement especially. Most people who grew up in the Boston areas have some kind of connection to it. Every person you say ‘Filene’s Basement’ to has a story.”

McGillivray said the store’s design and features would “pay some homage” to Filene’s — most famous for its bargain wedding-gown sales known as “the running of the brides.” But the store will mainly serve to help to legitimize a new profile for Downtown Crossing, which is seeing millions invested toward shedding its old identity as a department store hub in favor of a modern city residential neighborhood with appeal to young professionals and others embracing an emerging urban lifestyle.

Located at the intersection of two subway lines and at what the company described as the “most heavily trafficked corner in Boston,” the store will have access from the subway. McGillivray said the tight spaces present challenges for designers and engineers to make the most of the selling space and facilitate the store for deliveries.

Inside, Roche Bros. will endeavor to provide “a curated assortment of merchandise suited to the unique needs of the downtown customer, from prepared food, flowers and artisan cheeses to household basics.”

Accompanying a trend toward downtown living is a larger shift in the way people shop, Roche officials say, reflecting an appetite for foods that are pure, local and adventurous; and stores that can facilitate new patterns of convenience. This was the mission leading to the introduction of Brothers Marketplace.

Although the Brothers Marketplace banner debuted in Weston, Mass., this spring, officials say the full expression of the new brand will be revealed upon the opening July 30 in Medfield, Mass. (That is the site where the concept has been under development for years; Weston, McGillivray said, resulted from a sudden real estate opportunity that allowed the company to roll out certain aspects of the concept that were ready to go). Medfield, McGillivray said, “is the real test.

“This is a store based on the way people are shopping,” he explained. “More frequently. Fewer big trips. More focus on fresh, prepared foods and convenience. This store tries to hit on all those trends.”

The task of developing the Brothers Marketplace concept went to Aimee Morgida, Roche Bros.’ director of operations. To say she’s enthusiastic about the project is putting it mildly.

“We started with a blank piece of paper,” she said. “We started going on trips, began to talk about it, and began to live it. Now here we are.

“Who gets to open up a business of your own creation, allowing you to draw on the resources and the talent of a whole company to help you realize that dream?” she added.

'Break all the rules'

Inspired by great food destinations including New York’s Chelsea Food Market and Loblaw’s flagship at Maple Leaf Gardens, Morgida said she was encouraged to “break all the rules” while imagining the store. Workers at Roche Bros. can’t simply transfer there — they need to apply and interview for jobs first. “We’re taking people who are passionate about food and passionate about working in a small store,” she explained. “Some people don’t want anything to do with a small store — they want to be where they're comfortable. Here, it’s all very high touch and roll-up-your-sleeves. We’ve found that the younger people in the company are very into it. They’re eating up the concept and very happy to work there.”

While the official description of Brothers Marketplace calls it a “next generation community market” Morgida said the journey to create it arrived at something resembling a 1940s-era neighborhood market — not coincidentally, the very kind of store Roche Bros. was founded as. “It’s a flashback,” she said.

More specifically, the store is geared to shoppers who care about the quality and origins of their foods and/or are into cooking as a lifestyle; and those who tend to shop not weekly, but a meal or two at a time.

This is a shopper that Roche Bros. despite a reputation for quality and well-appointed stores, is not getting enough of, officials confessed.

“The goal was to get the customer we’re not getting. Or the person who’s not finding it convenient enough to come in [to a large store]. Let’s say you need something to eat for the next two days then you’re going out of town on Wednesday. You’re not going to go to Roche Bros or a Wegmans and do a week’s worth of shopping. That’s not how you eat. That’s not how you cook. So you would not necessarily go to a big-box store. You’d go instead to a specialty store. That’s the niche.

“For a family of three? We shop two days at a time: Tonight, tomorrow. And those people don’t necessarily want to go into a big grocery store. That’s the niche. And having the items to appeal to that demographic.”

To the latter concern, Brothers Marketplace is concentrating on local and specialty brands, prepared foods, and workers whose expertise can help shoppers become better cooks. “People ask if we can do catering,” Morgida said, “I say we can, but if you really want to live on the edge, we can show you how to cater it yourself.”

The younger shopper — a demographic Roche Bros.’ conventional stores tend to under-index in, McGillivray said — is a challenging target, given high-ranging tastes but limited budgets.

“They say, ‘I don’t have a lot of money so I’m not going to spend it on junk,’ because they are so fitness conscious and body conscious. They don’t want to eat a TV dinner or a chicken pot pie. Or if they want to have a chicken pot pie they want into to be really calorie worthy and homemade, with all-natural meat.”

They also tend toward indulgences, so Brothers Marketplace will feature cookies “as big as your face” Morgida said — but scratch-made at the store.

While the connection to Roche Bros. will be transparent for shoppers, giving the concept a distinct name and identity helps to manage shopper expectations, Morgida explained.

“It was important to maintain the connection to the goodwill and strength of the Roche Bros. brand but at the same time create a separate and distinct series of brand expectations,” she said. “We didn't want people to come in and say, 'Oh you don’t have this? You have it at your other stores.’ We wanted the opportunity to show them new things, without creating the expectation that they'd be sad if we didn’t have everything that every other store had.”

Roche Bros.' conventional fleet in the meantime has worked to further establish itself as a leading brand for service and selection in the wealthy communities in which many of its stores operate. Its 18 stores generated sales of around $575 million in 2013, according to SN’s Top 50 estimates, and according to McGillivray, are meeting internal expectations for growth and profits despite a competitive market including invasions of Whole Foods and Wegmans.

“It’s a constant quest to stay relevant,” he said. “It’s well documented that the consumer has many more choices than they did so the challenge we have is to continue to focus on the fresh. We've been a leader and a pioneer in fresh and prepared foods for a long time and that certainly leads to frequency of shop: Produce, fish and good quality meat are the things we’re known for. And all the things we're looking at being trends for the small store we think we're able to take advantage of because those are the strengths of our big stores.”

Tactically, Roche is addressing declining share in center store categories by focusing on certain areas in which it can establish as destinations. These include coffee, spices and olive oil — the latter in part through a bulk program where shoppers can purchase a refillable bottle in the manner of a beer growler at some stores.

Stores are also creatively responding to increased demand for natural and organic products. At the company’s Wellesley store, for example, natural selections are integrated with conventional products on shelves with green facings, as well as in endcap displays on cross aisles allowing shoppers to shop conventionally by pushing carts north and south; and natural and organic east and west.