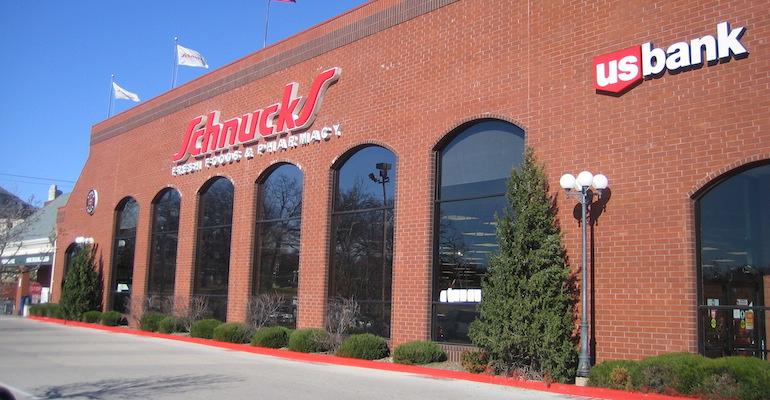 Schnuck Markets plans to add a food hall and a clothing outlet as part of a remodel of its Kirkwood store in St. Louis.

The food hall inside the 60,000-square-foot supermarket will include popular local eateries The Shaved Duck, Seoul Taco and The Greek Kitchen, Schnucks said yesterday. Each restaurant partner will operate a small service counter and share a common seating area.

Customers also will find an Arch Apparel department presented as a store-within-a-store. Based in St. Louis, Arch Apparel offers city-inspired “streetwear” ranging from tops and bottoms to outerwear, hats and accessories.

Along with an updated store exterior and a new look for the interior, a linchpin of the remodel will be fresh choices, Schnucks noted. Upgrades include a new produce department, kombucha on tap, a self-serve nut butter section and an expanded grab-and-go meal section. Other features include a new natural living department, a refreshed liquor and cold beer area, and modernized fixtures and displays throughout the store.

Schnucks also is refreshing the Kirkwood store's exterior and bringing a new look for the interior (rendering above).

During and after the remodel, shoppers will be able to use Schnucks Delivers and Curbside Pickup online grocery services via Instacart.

Schnucks said it has served the Kirkwood community since 1954, and the current iteration of the store, located at 10233 Manchester Rd., opened in 1987, replacing the original supermarket. The remodel of the store, which has 95 employees, is expected to be completed in midsummer.

“We’re proud to serve the Kirkwood community and surrounding areas and are thrilled to bring these great new features to their neighborhood Schnucks,” Kirkwood store manager Heidi Johnson said in a statement. “We ask for our customers to ‘pardon our dust’ and appreciate their patience as we work to bring them an exciting shopping experience.”

Experimenting with different store concepts is nothing new for Schnucks, which overall operates 111 stores in Missouri, Illinois, Indiana and Wisconsin.