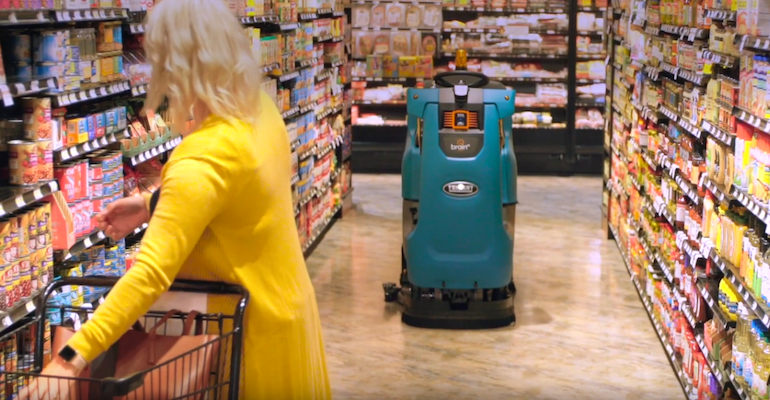 Schnuck Markets plans another robot rollout, this time to aid in store maintenance.

San Diego-based Brain Corp., said Wednesday that its artificial intelligence (AI) technology will power Tennant Corp. floor-scrubbing robots to be deployed at more than half of Schnucks stores by the end of the year. The St. Louis-based grocer operates 112 supermarkets in Missouri, Illinois, Indiana and Wisconsin.

Related: Schnuck Markets rolls out shelf-scanning robots to over half of store base

“These new robotic scrubbers will enhance cleaning performance, while giving valuable time back to teammates so they can spend more time doing what is most important: serving our customers,” Kim Anderson, senior director of store operations support at Schnucks, said in a statement. “Robotics and technology are important tools for helping us improve in-store experiences and achieve our customer-first values.”

Related: Schnucks to expand use of shelf-scanning robots

The Schnucks BrainOS-powered robotic scrubbers include route-cleaning upgrades that provide multiple consecutive routes, enabling up to six different routes to be scheduled and executed. A route-repeat function also allows for a continuous loop of one or more routes to clean problem areas.

Users of BrainOS robots, too, can now look at activity reports and autonomous usage metrics for one robot in one store or many robots across locations, thanks to a new centralized data warehouse and a high-performance reporting infrastructure, Brain Corp. said. In addition, unified reporting across applications enables executives to get performance metrics of multiple BrainOS-powered robotic applications via a single interface.

“Our goal is to make BrainOS-powered robots dead simple to use for any global audience and to help end-customers better collect and leverage robotic data so they deliver better customer experiences,” according to Jon Thomason, CTO of Brain Corp. “This new release extends the value of our platform and sets the bar for what users should expect from their investment in autonomous robots.”

In late September, Schnucks announced plans to roll out Simbe Robotics’ Tally shelf-scanning robot to another 46 supermarkets, covering more than half of its store base with the autonomous inventory management technology. Sixty-two stores in Missouri, Illinois and Indiana will have Tally robots once the deployment is completed.

The Tally robots travel the entire floor at Schnucks stores two to three times daily and scan about 35,000 products each time, helping the retailer keep products organized and stocked on shelves. Schnucks first tested Tally at several stores in July 2017 and expanded the robot pilot to 15 stores in the fall of 2018.