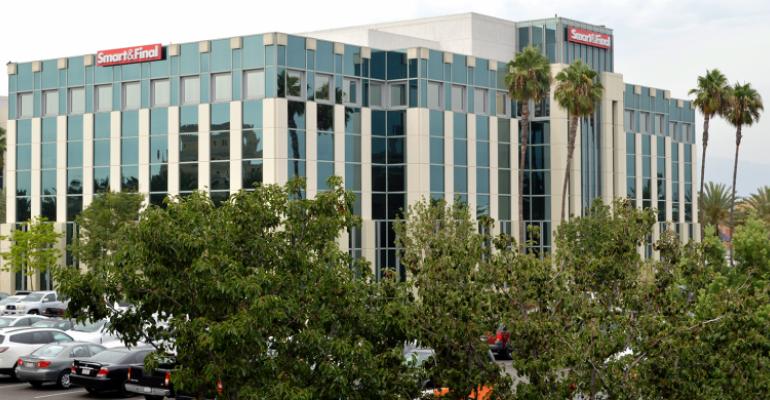 In an earnings call with analysts this week, the Commerce, Calif.-based retailer said overall comparable-store sales for the third quarter were up 1.5% compared with a year ago, and it projected comp-store gains of 2.5% to 2.75% in the fourth quarter.

“In the third quarter, our sales reflected more competitive pressure on store traffic than we had anticipated,” said Richard Phegley, senior VP and CFO.

Within the Smart & Final banner, comp-store sales were up 1%, including a 0.9% increase in comparable average ticket size and a slight increase in traffic. The company estimated that inflation boosted comps by 0.9%, mostly from increases in meat, dairy and produce.

Net income in the third quarter totaled $5.1 million, compared with $7 million in the year-ago period, which included a tax benefit of about $1.86 million. Revenues for the quarter were up 4.5%, to $1.46 billion.

The company said despite promotional spending at the Smart & Final banner, gross margins improved by 30 basis points as the company improved its inventory shrink rates and focused on reducing its cost of goods through “aggressive strategic sourcing initiatives.”

The company also stepped up its e-commerce initiatives. Late in the quarter, it launched shop.smartandfinal.com, allowing customers to order directly through through the website. Smart & Final also offers delivery as an option through Instacart at about 75% of its locations.

“Our digital experience to date has been favorable,” said David Hirz, president and CEO, noting that 80% of the company’s online shoppers have been introduced to the brand through Instacart, and acquired customers have an 85% repurchase rate.

The company is also testing click-and-collect at about a dozen stores in each of its Smart & Final and Cash & Carry banners.

“While it's early, we're encouraged by the results from our click-and-collect guests, most notably in our Cash & Carry banner, where the average transaction size is several times larger than an in-store transaction,” said Hirz.

The company operates 316 stores in several Western states, and another 15 in Mexico through a joint venture. It plans to open seven new Smart & Final Extra! locations in the fourth quarter.