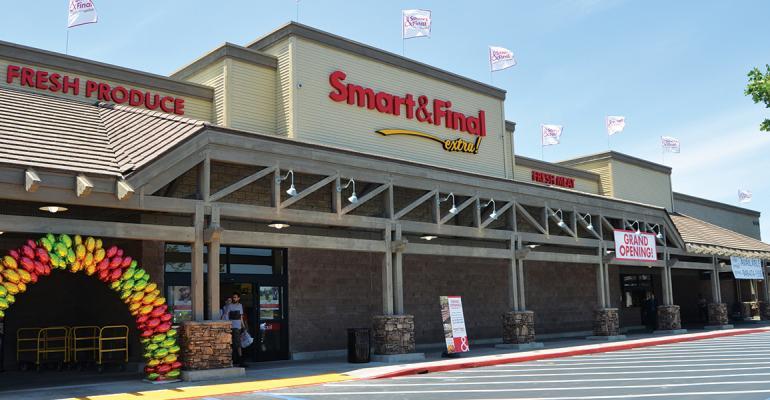 Smart & Final Stores Inc. is reaping the benefits of its e-commerce investment, President and CEO David Hirz said in reporting a sales uptick for the second quarter.

For the quarter ended June 17, the grocery and foodservice retailer tallied sales of nearly $1.13 billion, up 4.4% from $1.08 billion a year earlier.

Smart & Final said the gain stems from a 1.3% increase in comparable-store sales and the net sales contribution of new stores. The comp-store growth reflects 2.8% growth in the average transaction size and a 1.4% decrease in transaction count.

Among the company’s retail banners, sales for Smart & Final stores rose 3.9% year over year to $868.5 million in the second quarter, with same-store sales edging up 0.8%. Meanwhile, Smart Foodservice Warehouse totaled revenue of $257 million, up 6.1% from a year ago. Comp-store sales advanced 3.3%.

"In the second quarter, we were pleased to deliver positive comparable-store sales in both our Smart & Final and Smart Foodservice Warehouse store banners. This reflects how our unique assortment of business and club-pack items, our high-quality private label offerings and rapidly expanding e-commerce channels resonate with shoppers," Hirz said in a statement. "While investing in customer service initiatives, we also expanded merchandise margins, grew adjusted EBITDA, and reduced outstanding debt, resulting in an improved financial leverage ratio at quarter-end."

Hirz noted in a conference call with analysts that online grocery sales for Smart & Final accelerated in the second quarter and have jumped 100% year over year. More than 85% of Smart & Final stores offered online delivery as of the quarter’s end, covering 97% of the banner’s market area.

“Average online ticket continues to trend considerably higher than the average in-store ticket, hitting a new high for the Smart & Final banner of over $80,” Hirz said. The average ticket through the Smart & Final iOS mobile app was even higher, reaching $90, he added. The iPhone app launched during the quarter, and last week Smart & Final rolled out an Android version of the app.

“Key to growth in both brick-and-mortar stores and online channels is customer engagement, and late in the second quarter we expanded our partnership with The Nielsen Co. to deepen our customer insights through a joint analytics team,” Hirz told analysts. “The goal is to better understand what drives purchase behavior for our customer segments and how we can leverage these learnings into additional sales opportunities across our channels.”

Early insights from the data indicate that the Smart & Final banner’s value proposition is resonating with customers, with bigger baskets from repeat shoppers, according to Hirz. “We're focusing on developing additional insights to better target shoppers who are less familiar with Smart & Final or shop our stores on a less frequent basis, which should help strengthen store level traffic,” he said.

Similar results are being seen with the Smart Foodservice stores. Ninety percent of these locations offer delivery or click-and-carry, and the average online ticket is much higher than the in-store average.

“We hit a new record in the second quarter, led by our click-and-carry program, where the average ticket was over $700,” Hirz said.

Smart Foodservice also is testing delivery to larger foodservice customers through a third-party partner that operates temperature-controlled vehicles, he added. “We currently have a one-store pilot in the San Francisco Bay Area which, if successful, will be expanded to a broader group of stores. The third-party delivery partner reaches customers up to 50 miles from the pilot store.”

The adjusted earnings per share were in line with analysts’ projection of 16 cents, according to Thomson Reuters. Estimates ranged from a low of 13 cents to a high of 18 cents.

Smart & Final turned in adjusted EBITDA (earnings before interest, taxes, depreciation and amortization) of $49.3 million, up 2.5% from a year ago.

Hirz said that Smart & Final expects to open five new Extra! stores and relocate three in 2018. Three more Smart Foodservice stores are slated to be opened in the second half of the year.